Story of a Long-Box Willys, Part 3

See also Chapter One and Chapter Two of the story of Dean Thiem's 1953 CJ-3B and its after-market body extension.

Chapter Three: She Wants to Take the Family 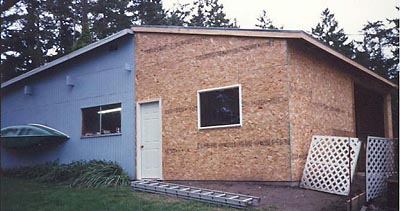 Everything was painted and ready to be put back together, but there was one slight problem -- I had run out of room in my garage. This started a two month detour in my Jeep project. I pushed everything into the old part of the garage, and added a 15x28-foot addition to the existing 28x28 structure. It ended up being a major project, as county building codes change if a building is over 1000 square feet. We had to sheetrock inside and outside of both new and old parts of garage, which led to vinyl siding the whole thing. So much for a quick addition. The good news was that by leaving the original overhead door on the old section, I now can close off the new addition and have a marvelous paint booth. It also means I can heat only one section of garage and am more likely to work in the winter months. Since I have several other vehicles waiting a turn, this is good. At least my wife thinks so -- she keeps making junkyard comments. 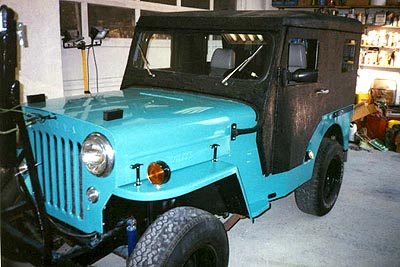 Two months later, I was back to trying to reassemble my 3B. The next step was to install a roll cage. I found all the parts at a local 4-wheel-drive store. The rear half was welded, but bars between the rear half and front half had to be welded in place in the Jeep. I never did like welding inside a vehicle, especially vertical welds. I guess that is why God invented angle head grinders, to clean up sloppy welding. I didn't like the way the roll bar mounted to the back of Jeep, so I installed two 2" by 24" black strap gussets, inside the wheel wells and on the outside, to ensure it would hold up if needed.

Next came the seats and the wiring. The seats I got with the CJ-3B were not original and very uncomfortable. I found a set of fully adjustable leather seats, and spent more than a week just building brackets to support the driver's seat over the gas tank. The original wiring harness was beyond repair so I bought the Painless 14-circuit fuse panel, and with many days' help from my brother, made and installed the complete wiring harness. I had some trouble with the aftermarket (1950s vintage) turn signals but soon had everything working. 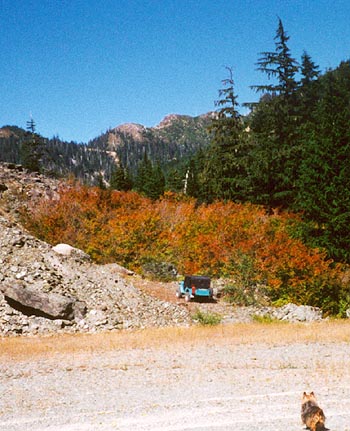 I installed the hardtop and was ready for the first test drive. I had been advised by the local Jeep experts to put in power steering, upgrade the brakes, and replace the front cross member and springs. But, what do they know? Well, our first test drive ended as a real adventure. At 30 MPH, the Jeep became uncontrollable and dove for the ditch. It didn't quite make it but sure got my wife's attention. Her opinion of the Jeep took a dive too.

I had taken the old steering stabilizer off during the rebuild and had not reinstalled it. Remember, the original crossmember under the engine had been cut off and replaced with a piece of channel and the bell crank had been welded to it. Then, half of the channel had been cut away to clear the radiator. It turns out that the homemade crossmember was flexing, and causing the whole front end to shake. So back to the garage again. I removed the front fenders and grill again and tried to figure out how to repair the crossmember. Nothing I could engineer would accommodate the bell crank, so the decision was made to do a power steering conversion. Before I got done, I had 4 Saginaw steering boxes, 6 Pitman arms, 2 sets of tie rods, 2 tilt steering columns and 3 power steering pumps strewn around the garage and the wife was questioning my sanity again.

I cut out the homemade crossmember and put in a piece of 1" by 4" thick wall rectangular stock across the bottom of the frame. Then I installed gussets to the top of the frame. It came out tidy and strong. I purchased a Saginaw 4-bolt steering box mount plate and with much design modification, I welded it to the frame, right behind the bumper. I had previously boxed the frame from the center of the engine compartment to front bumper.

I went with a 4-turn steering box on the advice of the local 4WD shop. He said a 3-turn would be too fast and difficult to control. Boy was he right -- even the 4-turn is very quick. I managed to install the Pontiac steering column without cutting the dash. I had to find a special exhaust manifold to clear the column though. Buying the couplers and shafts to join the column to the steering box was an adventure in creative spending. Who would think that just a couple pieces could cost over $250.00. I installed a new steering stabilizer. I had to manufacture the power steering pump brackets as nothing would work because of space. Two months later, I was finally ready for test drive number 2. 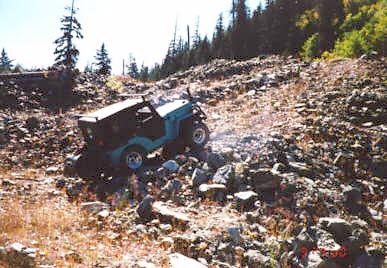 I loaded wife into Jeep assuring her all was well this time. Everything worked much better. It steered with no shimmy and drove like a whole different vehicle, although it still stopped like a 3B. Well, life never goes smoothly and we got about 2 miles from town and ran out of gas. Seems the gas gauge didn't work. And someone had not put gas can back on -- oops. So I left the wife to guard the Jeep and went on a hike -- mumble. The wife thought this was quite funny. Women.

I bought a set of used 32x11.50 tires with chrome rims at a local swap meet and finally got it out in the mud for the first time. What a joy. We had a blast but the thing rode like a buckboard and still stopped like a 3B. 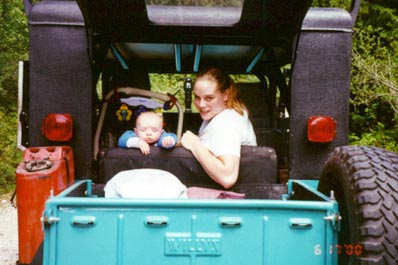 Oh, and the wife was muttering about back seat and seat belts so we could take guests. Somehow we have different priorities, but being a nice husband, when we went to a zoo in Canada I managed a side trip to a Jeep place up there, and was lucky enough to find a fold-down rear seat that would fit for $30. So I stuck that in and used seatbelts off old seats to make back seat belts, all the time thinking no one would ever ride back there. Well we have not made a single trip since without someone back there. Our grandson who is now 9 months loves these rides. We have even managed 4 adults and dog and baby on a couple of trips -- talk about cozy.

I decided to inspect the springs to see if they were OK. Well it turns out the springs had lost their arch and I had one broken leaf. So as soon as my wallet and wife had recovered from the steering conversion, I purchased a full set of Rancho 2" lift springs. I installed them in a weekend. I also put on new rear shackles but used the original front "U" shackles -- I couldn't install upgraded shackles on the front due to the steering box mount. Next came a full set of Rancho shocks. The ride improved greatly. But I still couldn't stop without dragging my feet. So after several months of wallet recovery time I bought 11-inch brake upgrades for both axles. It was a very easy conversion except I could not get one rear hub off and ended up buying a special tool made for this job after several attempts with other tools. I now can stop when I want, and have quit looking for ditches to drive into to stop. 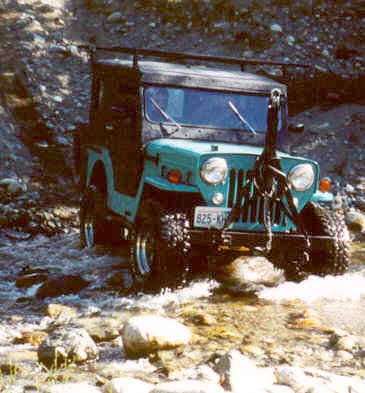 My brother decided I needed a winch so he calls me from Grand Forks, North Dakota and says "I bought you a winch but you have to come get it." Bribe to get us to visit I guess, but it was a good excuse for a road trip in the Motor Home, so we went back for a couple weeks to visit family and came home with a Husky 8500 super winch. So that is mounted on the front now in case I gotta pull myself out of something.

The last two years have been a real adventure and learning experience -- I want to thank Derek and all the contributors to CJ3B.info. My Barbie Turquoise CJ-3B now spends its time behind my motor home. We drag it to the mountains any chance we get, and go cruising the woods and logging roads with our 9-month-old grandson strapped in the back seat and my wife riding shotgun and hollering either "What's up that way?" or "Don't you dare drive this thing up there with the baby in here!" What a riot!

Of course, it is not really done, as all Jeep lovers know. It needs better tires, a gas gauge that works all the time, and the wife says a CB or cell phone for when we really get in trouble, because long walks with a toddler are not on her to-do list. She also says I gotta redesign the back seat mounts so it sits higher as it's a leg killer. So I will think about those items while I work on the CJ-7, Wagoneer and '53 Jeep pickup which the wife thinks ought to either run or disappear. Oh well, would not wanta be out of projects...   -- Dean Thiem

Thanks to Dean for his great story and photos. -- Derek Redmond

Return to Chapter One or Chapter Two of "Story of a Long-Box Willys."