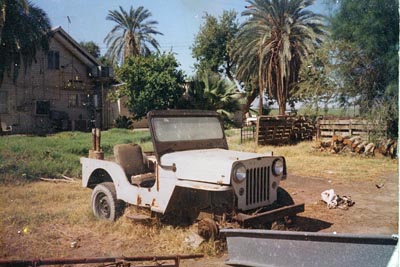 Where to start? Well, it was 1997. I was a sophomore in high school in California and was in need of a vehicle of some sort. My Dad having the keen eye that he does, kept passing this Jeep in a field on his way to and from work. After he decided that it looked like a do-able project, he took me out to look at it.

It was a 1953 CJ-3B just sitting in a farmer’s equipment yard with bullet holes in the glass and weeds growing up through the engine bay (160K JPEG). So $750 later the owner (who was the son of the original owner) dropped it off at our house. We were now the second owners of the Jeep, and we set out to do a frame-off restoration. 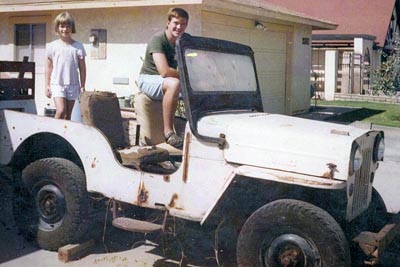 We started hard and fast with an initial intention of completion in a year. It was a good thing that I was in welding in high school, because after we sandblasted the frame I had to weld up some cracks due to this thing being used as a farm tractor.

We sent the running gear off for rebuild. Everything was rebuilt with the exception of the rear axle that had to be replaced. At the time our knowledge of auto parts and repair was very limited. JC Whitney and local auto part dealers were all we had to work with in the beginning. It was evident that a year wasn't going to be long enough. That, coupled with funding issues, my parents splitting, and lack of space to work on it, put it on hold. 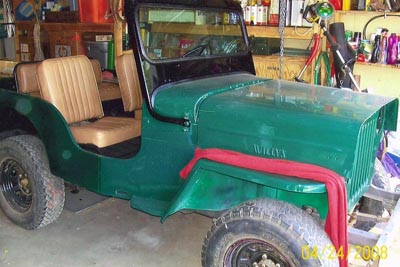 We were further delayed because I was the automotive end of the father / son team and I decided to move to Idaho after high school. It sat at my father's various houses for the next few years. I joined the military and moved to the other side of the US. My dad finally decided that it had been sitting long enough and he wanted his garage back, so he started spending whatever was needed to finish. So thanks to finding CJ3B.info and Kaiser Willys Auto Supply, Midwest Jeep Willys, Willys Jeep Parts.com, and 4 Wheel Drive Hardware, parts started coming in.

I took off before I could get to the body work, so dad outsourced that. We decided to keep it as stock as possible, but with a few upgrades. We put 11-inch brakes on, converted it to a 12-volt system with all new wiring, changed to a spin-on oil filter, and had the old oil bath air cleaner housing converted to a paper element. We also added a rear seat that was modified from an old bus seat. With the addition of an electronic distributor, new Solex carb, and all fluids, it finally coughed to life on August 28th, 2009 at 5:05 P.M. My Dad called me and told me to mark the date and time. It had taken about 13 years, and just over $13,000 to bring it back from a basket case to a "new" 1953 CJ-3B. 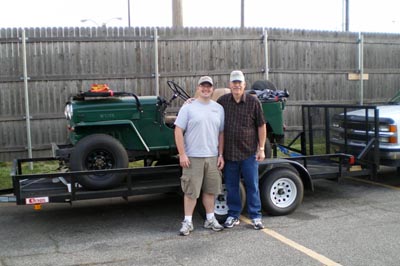 My Dad’s problem then became how to get it from southern California to the coast of North Carolina. It turns out that Oklahoma City is almost exactly halfway between the two (about 1300 miles from each), so Dad borrowed a trailer and headed east, and I rented another and headed west. He picked up his friend Dennis Blalock in Winslow, AZ as a co-driver, and we met in Oklahoma City on September 8th, 2009. We drove the Jeep around for a day, paid our respects at the Oklahoma City memorial, and then loaded it back up on my trailer and said our goodbyes. 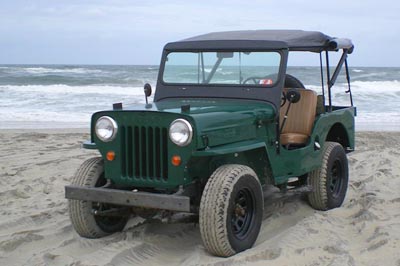 After I got it back to North Carolina I set about doing the tune-up stuff my Dad didn’t know how to do, and tightened the bolts he left loose to cure some of the rattles. I fixed the sending unit / fuel gauge mismatch that had caused him to run out of gas on the early runs, and welded up the roll bar that we both considered necessary.

I'd like to end by saying thanks to my Dad. He did most of the work and spent most of the cash and because of that I was able to have such a great Jeep at a pretty young age (although 13 years older than we originally expected!) -- Kristian Sather

Note: As of 2020, circumstances required that the Jeep be sold, and it now belongs to Tom Gallagher in North Carolina.

Thanks to Kristian Sather and his father Marty for their story and photos. -- Derek Redmond

Last updated 31 May 2020 by Derek Redmond redmond@cj3b.info
https://cj3b.info/Owners/Sather.html
All content not credited and previously copyright, is copyright Derek Redmond