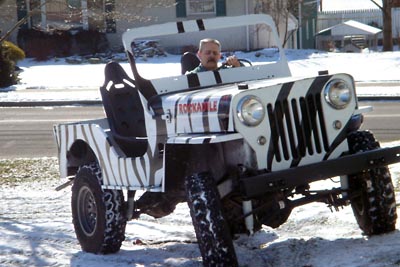 James Alan Brown must be an animal lover. He's painted his freshly restored Jeep in zebra stripes, he calls it the "Rockadile," and he even says, "I'm bringing this rust heap back from the dead."

Alan is seen here on his first drive, a spin around the yard in the snow, after finishing the frame-off project on a pretty fast schedule over the winter. His verdict: "Everything really seems to work well... so far!" 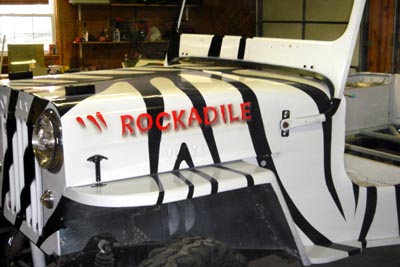 Other than the paint, the Jeep is largely stock, but there's no doubt the stripes and the airbrushed name will grab some attention out on the rocks as well as on the asphalt.

Alan comments, "I'm not doing a museum restoration -- it will be driven on the street and wheeled offroad. The seats are from Summit Racing. I would not think they would be the best on real long hauls." 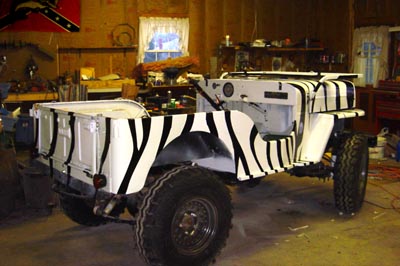 Alan chose "Gambler" style wheels, which were stripped and painted graphite grey for the new TSL Swampers. In this photo the dash, lights and wiring are done, and the beast is ready for the seats and roll bar. 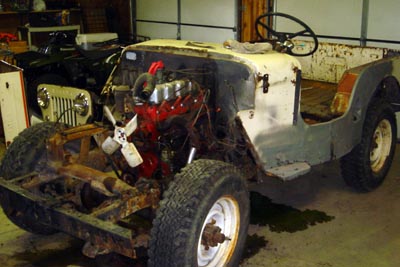 This photo shows the result of preliminary bodywork done to straighten out some body damage from a minor car crash: "After getting it home with the help of some friends, we chained the damaged left side to a hickory tree and pulled out the worst of the damage. Now the teardown has begun." 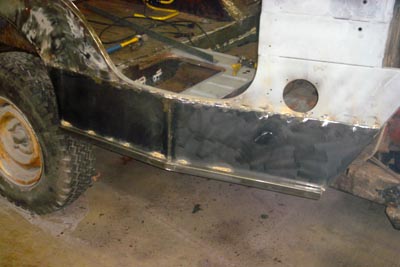 The side panels were overlayed with heavy steel, then 1" square channel was added to the bottom to trim it back from the fenders, and add a little tree and rock protection.

The first step in painting was to do the whole body in white paint (70K JPEG). Alan says, "I used white fleet paint and toned it down to a bright grey with black toner." 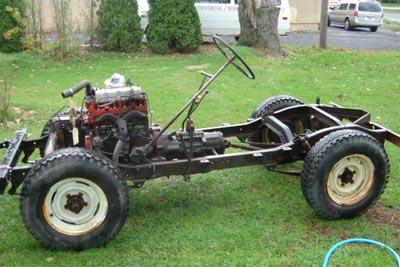 After the frame was pressure washed, the plan was to add 2-1/2" of lift with new springs, shocks, wheels and tires. The engine itself didn't need much more than a tuneup and carb rebuild -- apparently there was only 19,000 miles on the original drivetrain. 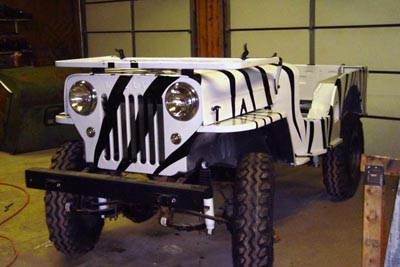 The new front bumper is a spare TJ rear that was lying around.

With the new suspension, wheels and paint job ready to go, it's easy to see why Alan was eager to get the Rockadile outside the garage for a test drive. 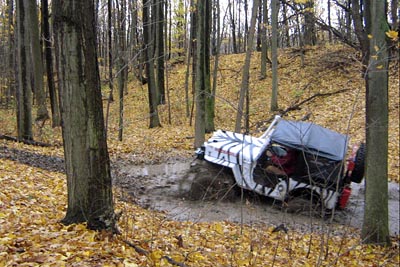 Eventually Alan sold the Jeep, and the new owners put a 4" lift on Rockadile, and new tires and wheels. Also a roll bar, a winch, a tire rack on the back, and D-rings on the front to make it eligible for the Jeep Jamboree.

Thanks to Alan and to "gmcgirl" for the photos. -- Derek Redmond