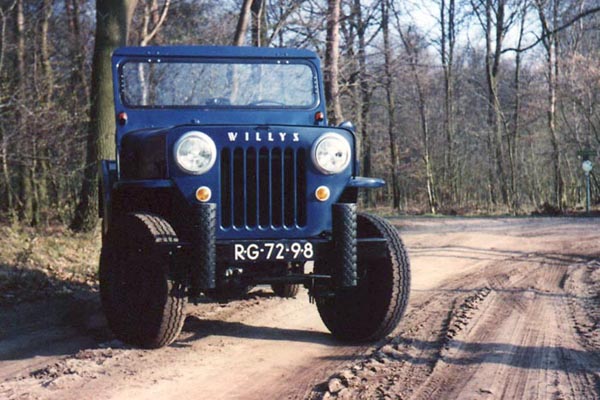 My 1954 CJ-3B was bought in 1954 by the police department in Rotterdam, Holland. They used it to push cars that broke down on the highway. After the police sold the Jeep to the national forest service, it was used to tow trees out of the forest and for inspection of the woods. This organisation didn't look after the Jeep, so it became in a very bad condition. I bought the car at an auction of government property and began the restoration. 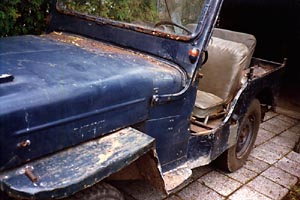 My brother-in-law Hendrik Croezen and I started by taking pictures of the Jeep to see how everything looked before the restoration. By taking the pictures we knew how everything was painted and how it should look after the job was finished. You can see how much the body was damaged by rust. 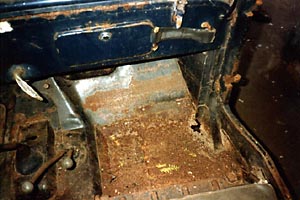 A look on the inside. This is a picture of the right side of the interior; you can see how the rust has taken the floor away. The glove compartment in the dash was already there when I bought it. It must have been installed by either the police or the National Forest Association. See also the left interior (70K JPEG), same bad condition. 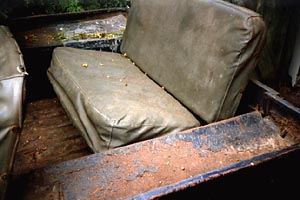 Picture of the rear. Not much better. 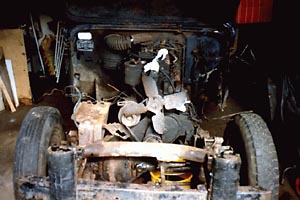 By this time you can see in what bad shape the Jeep was before we started the restoration. It was covered by rust and nothing worked anymore: even the engine was full of rust from the outside as well as the inside. There was no way to test the engine, so it was a bit of a gamble to buy the Jeep. 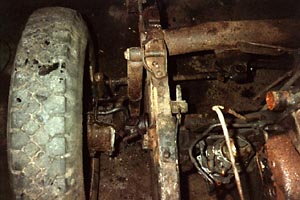 We decided to take the Jeep completely apart. The first problem we were confronted with was the different size of the tools we had to use. (In Europe we use metric sizes which don't fit on the nuts and bolts of a Jeep.) So the first thing we had to do was buy inch-sized tools. (Not very common in our country so you can imagine they were very expensive.)But okay, after getting the right tools we could start. We started with taking the seats out, then we removed the lights and the electric wiring. After this we took off the bodywork. 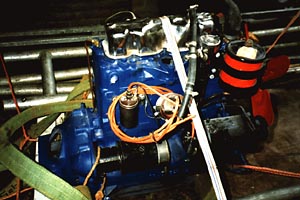 The gearbox and the engine were completely overhauled. At first we couldn't decide what colour was best for the engine (we tried several colours). In the end we painted it black. 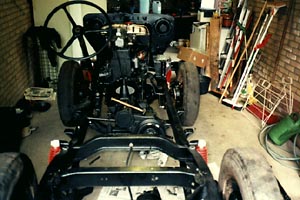 See also a closer view of the rear of the frame (50K JPEG).

Continue to Part 2: Wiring and Bodywork.

Thanks to Erik for the photos and information. -- Derek Redmond