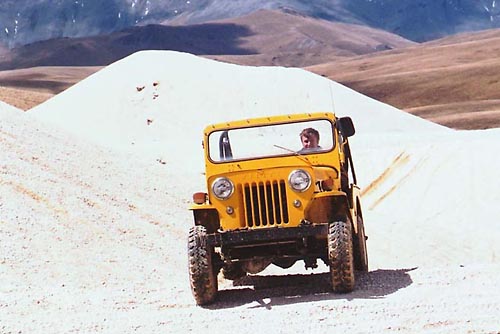 What better to set off the beautiful other-worldly landscape of New Zealand, than a CJ-3B Universal Jeep in a bright Transport Yellow paint apparently ordered by the trenching company that imported it into the country. 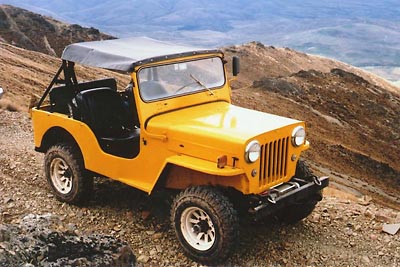 A former owner reported, "As far as I know there are only four or five CJ-3Bs in all of New Zealand, and of those only two are on the road..

"The original papers of the Jeep read 4J290350 for the engine number and 57348 79416 for the chassis. So do the recent papers. The engine seems to be original. The Jeep was imported new in 1961 especially for a trenching company in Auckland. They must have changed it considerably for the hard work it had to do. There is one more leaf in the back springs. The rear body was cut off and later, when they sold it, was welded on again.

"Its chassis is definitely not standard factory, but has been done by a professional, everything beautifully welded and reinforced with diamond shaped plates. Even the suspension mounts for the springs are not pressed but cut. On the other hand the mounts for the shock absorbers are pressed. My suspicion is, that the trenching company needed a stronger chassis for the hard work the Jeep had to do and made one that could stand up to the stress."

"The photos were taken on a great rally in the mountains above Naseby, Central Otago. Nineteen vehicles participated, predominantly WW II Jeeps (and one Wrangler). The rally was held during the weekend of 18 November 2000." 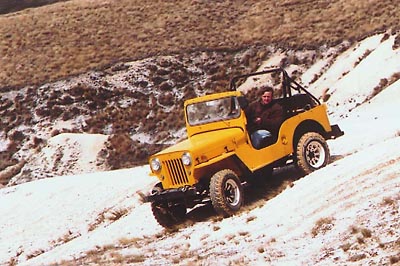 "Other than the chassis, everything else that has been touched on the Jeep is terribly rough. Nuts and bolts have been over-tightened and knocked, bearings haven't been tight enough and run loose, and the oil outlet in the transfer case was almost completely blocked with silicone sealer. Because of the difference of workmanship, I believe that the chassis had been done at an early stage, but the 'butchering' later.

"The body seems to be original -- one paint coat in yellow -- and I was assured this was the colour of the trenching company's vehicles. The chassis works very well and the Jeep drives very well (now the suspension has been done). As far as I know, Jeep chassis are meant to flex, and I don't know how hard it is to rebuild a chassis that not only looks like the original but works as well as the original."

Thanks to the former owners for the photos. -- Derek Redmond