by Vincent Milder, The Netherlands 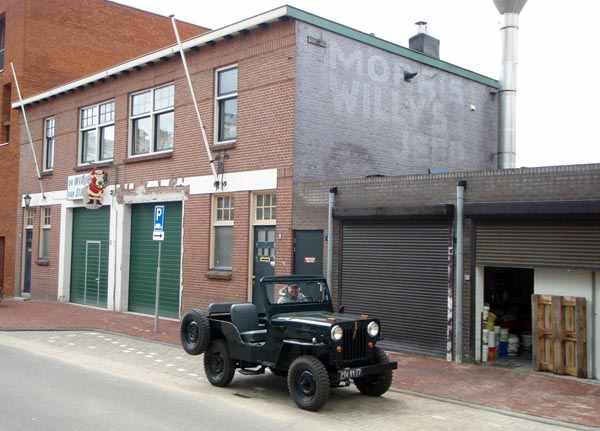 This the story of my 1956 Willys CJ-3B. This Willys was from an uncle of my father, he bought it brand new in Nijmegen, a city in Holland, in the year 1956. The name of my father's uncle was Ben Meurs, a farmer who lived in Gendt, a small village between Arnhem and Nijmegen. This picture is of the garage in Nijmegen in the year 2009 -- you can see on the wall the painted sign "Willy's Jeep" from the dealer who closed 40 years ago!

My father remembered going with his uncle to drive in the Jeep in the 50's when he was 14 years old. When Ben died, the Jeep went to a cousin of my father's in Belgium who was heir to the Jeep. But my father didn't know that! The Jeep was parking in a little garden house for 25 years and not used!

In 2003 my father had a family reunion with all the family. He asked different family people, "Where is the Jeep?"

"I want to buy him -- he belongs a litle bit to the family and we want to keep that."

"OK," says his cousin, "When can you come to Belgium?"

We have a company with a truck with a crane, for loading the Jeep. With a small tractor, we pull the Jeep through the garden on flat tires. We load him on the truck and drive to the Netherlands. 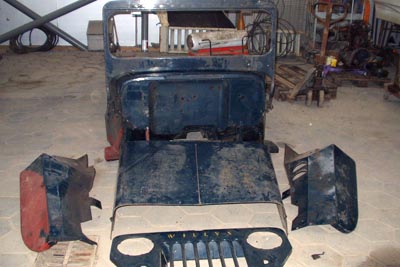 We're coming home with an original Willys Jeep which my father had last seen 30 years before. We park the Jeep in the garage, buy a new battery and clean the carburetor. In 20 minutes that engine is running! The Jeep is technically good, only no brakes, and the paint is bad, and oil leaks. But only light rust. 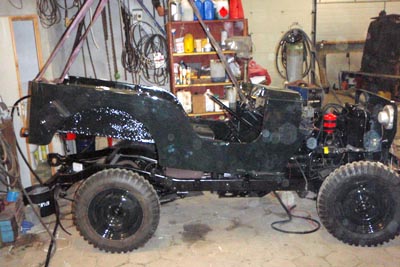 I began restoration of the Jeep in the year 2007, and it was ready in 2009. Everything new, oil gaskets for the engine and axle, fuel tank, radiator, new brakes, new tires, etc. etc. And new painting and new registration.

Last year in the summer I drove with my father in the CJ-3B back to our small village Gendt. The Willys is back! 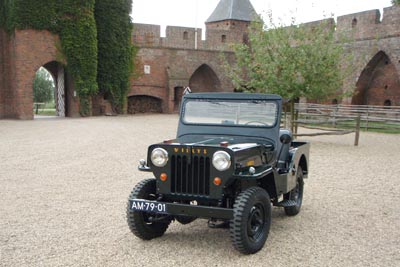 This picture of the Jeep is at the Kasteel Doornenburg (Castle Doornenburg), a 700 years old building in the small village of Doornenburg, where my dad lives now. When my dad is looking out his window he can see the castle.

Note: Doornenburg Castle was built in the 13th century. After being restored betweeen 1937 and 1941, it was used during World War II by German forces as a headquarters, and in the last months of the war was destroyed by the Royal Air Force (130K JPEG) who were unaware the Germans had already left.

The castle was completely restored again between 1947 and 1966, by many of the same craftsmen who were involved in the first restoration.

Thanks to Vincent for the story and photos. Thanks to Rijksdienst voor het Cultureel Erfgoed for the WWII photo from Wikimedia Commons. -- Derek Redmond