This is a fun story, about a guy who had some off-road racing success in his CJ-3B, and another guy who is hoping to repeat that success by building a very similar rig, more than twenty years later. The scene is the Line Mountain 7-Miler, a race held every summer since 1970 in Dornsife, Pennsylvania. It's often called the "toughest seven-mile obstacle course in the USA," and most of the 140-odd Jeeps, buggies and ATVs that show up, consider themselves lucky to finish a lap, let alone be in competition for a win in the four-lap race. -- Derek Redmond

I'll let Ryan give us the background on the Jeep he built: "This '62 CJ-3B has been with me for around 25 years. I was 20 years old, living in Pennsylvania, when I bought it for $100 with no engine, from my buddy Eric in New Jersey. The body was fair, by east coast standards. It was a farm Jeep; Eric literally pulled it out of a manure pile and dragged it home just before finding out his wife was pregnant, so his ownership was short. The right rear corner of the body was buried in manure and was dust. I brought it home in the bed of my dad's '74 IH dump truck, and built it into a budget race Jeep in two months." 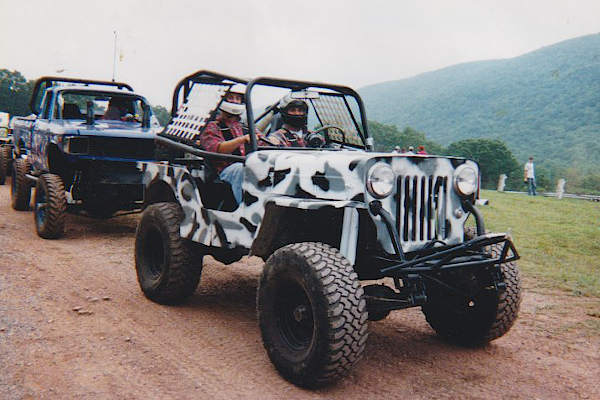 "I found a good-running F-head for $400, threw in a Saginaw power steering gear and tilt column, bent up the cage, welded the spiders in the rear 44, and did a YJ spring-over with dual Rancho 5000s at all four corners. The ends of the frame were raised a few inches in order to gain as little lift as possible from the SOA swap. The tires were junkers I found for sale on someone's lawn.

"The Jeep was purpose-built for the Line Mountain 7-Miler. This photo was taken minutes before its inaugural run, lined up in the staging area." 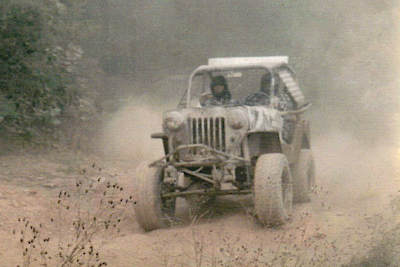 "It was/is a brutal course through the PA woods that my wife described as 'a three-hour plane crash.'" 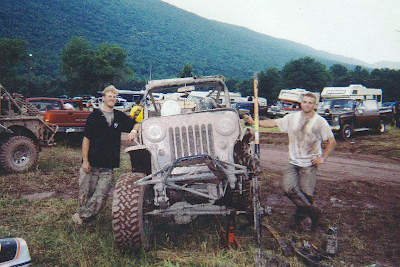 "That first race didn't go well; I made it a few hundred yards before I broke the rear driveshaft. But by the following spring, I had it pretty well dialed in. Out of 140-something racers, that old F-head posted the fastest single lap time. I struggled to finish that race after a rollover and lost brakes from a pinched brake line, but fun times were had.

"Here's our after-race repairs. Note the crunched fender from the rollover." 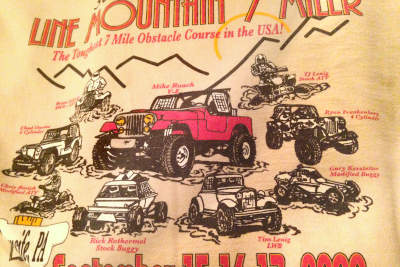 By 2000, Ryan's CJ-3B had made it onto the official Line Mountain T-shirt, but he points out that he generally did better in the 3-1/2-Miler race in the spring which is more technical, while the 7-Miler in late summer had faster sections that the underpowered 3B didn't do as well with. 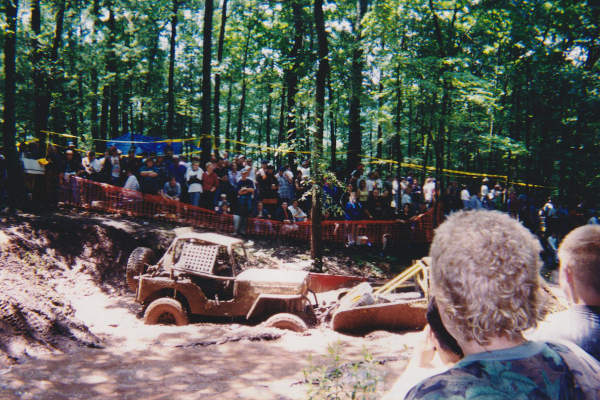 Ryan says, "This pic is from 'the waterhole.' It was the smelliest, most stagnant water, and the hidden ruts were so bad, if you didn't hit it right, there was a risk of rolling over in it. A lot of rigs hit the water and died from electrical issues. That's what happened in the pic; I think it was a Ford Ranger that was dead, and the bypass was often worse than the main way, so I was pushing the truck out of the hole from behind." 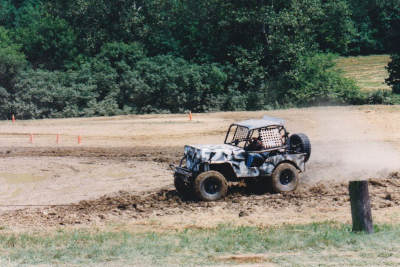 "This one is from the dirt track at the Kempton PA fairgrounds, where the Willys Picnic is held. It's a funny story; this was the week after receiving the fastest lap time trophy at Line Mountain, and I was by far the slowest vehicle on this course. Many of the racers were the same. It just shows how a vehicle specifically built for one terrain can be worthless on another." 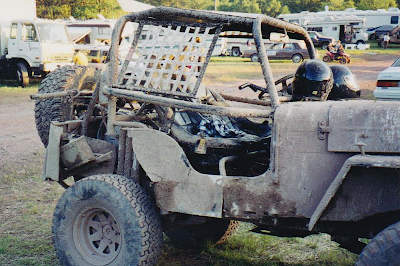 "I eventually licensed this Jeep and used it as a commuter to college, while continuing to race it two or three times per year. In 1999, I moved up to New Hampshire. I worked at an ironworking firm, and I struck a deal with the owner to let me use the shop's brake, shears and rollers on weekends to rebuild the body, since the previous race was the body's final coffin nail." 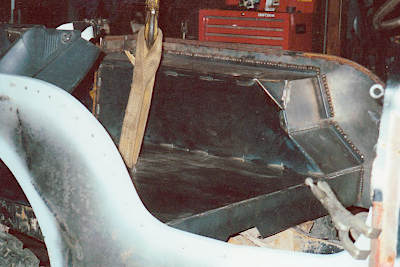 "I cut the body straight down from the dash and rebuilt the rear half to factory dimensions." 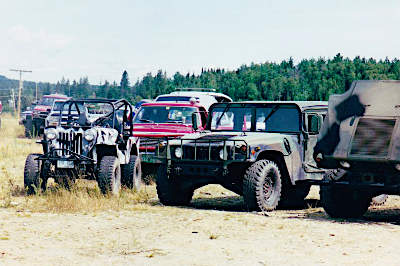 Here's Ryan's Jeep next to a military HMMWV (nearly twenty inches wider than a 3B.) 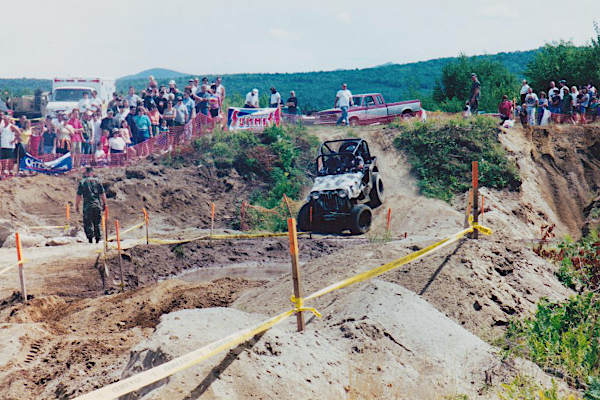 Ryan explains: "One of my employers was involved heavily with the New Hampshire National Guard. They held an event to display the abilities of their HMMWVs, and he invited me to see how the 3B would do on their course. The little F-head was too underpowered for the hill climb, but everywhere else, it drove circles arounds the military rigs." 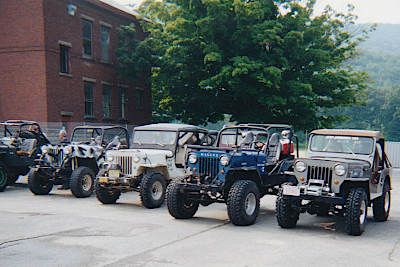 "Here's a pic at a Willys trail ride in western Massachusetts with three other 3Bs, from around 2001. 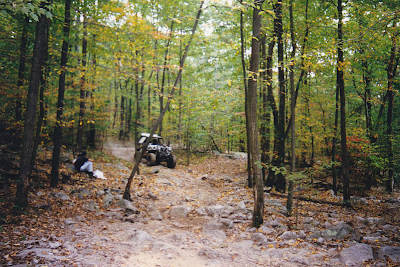 "In 2003, I moved to Idaho, and I met my wife. A few months after we met, we flew back to PA, and we gave the 3B one final race. A few years later, I had it shipped out here to Idaho where it now serves snow plowing and stump pulling duties. It's going under the knife in spring 2021 for another grand rebuild."

David Freibert says he first saw Ryan's CJ-3B on the EarlyCJ5.com forum and thought it was pretty cool because it was a mostly stock CJ-3B race Jeep and the build appeared to be rugged, cheap, and simple using nothing more than some steel and ingenuity.

"I wasn't sure what direction to go while I had it torn down. The frame needed mending and the old springs and spring hangers were worn out as well, so I figured it couldn't hurt to go another route rather than a stock rebuild. I ended up settling on stock YJ springs, then I borrowed Ryan's front spring hanger design, and sometime after that, I started to look into building a cage, and through correspondence with Ryan I ended up with a similar cage (and 3B) to his." 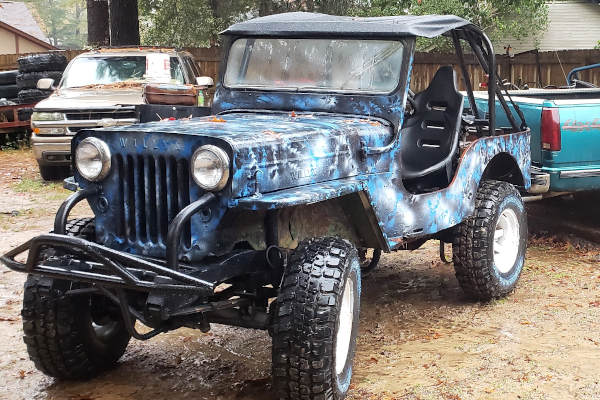 "I would like to race my Jeep in the Line Mountain 7-Miler to complete the 'circle.' This is my first Jeep build. I've had many Jeeps but never built one from the ground up. I had never used a welder or tried to fabricate before I started this project. I should add that I built the entire Jeep using pictures, tape measure, sharpie, and trial and error along with some sage advice from Ryan." 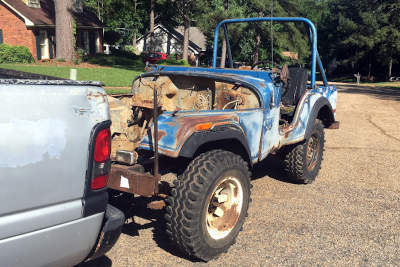 "The rear D44 flanged axle has Samurai rotors, custom brackets, and Tracker calipers. I will be swapping out the rear calipers for some off an 80's Nissan 300zx for their parking brake capability. Front disc brake parts are from an '84 CJ-7 D30, and the master cylinder is from a 1975 International Scout." 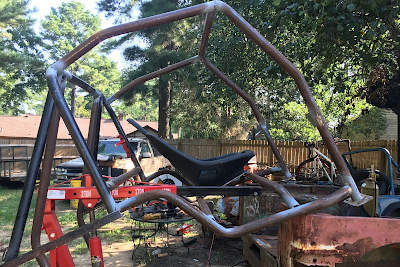 David welded up a cage starting with the old roll bar. He also put his new welding skills to work on a rear spare mount (240K JPEG). 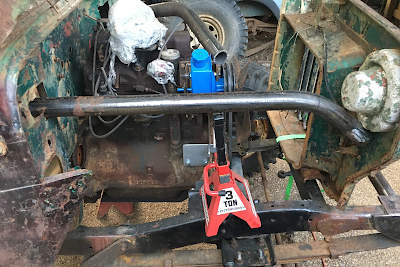 He says, "The front shocks (150K JPEG) are the rear shocks from a '99 F250 (Gabriel 61656.) I attached them to the roll cage because that's what Ryan did on his 3B. I have seen other Jeeps with a similar setup. The shocks are 31.5 inches extended and 18.5 collapsed, with 13 inches stroke. I run them on all four corners and I actually bought four more, to have dual shocks all around." 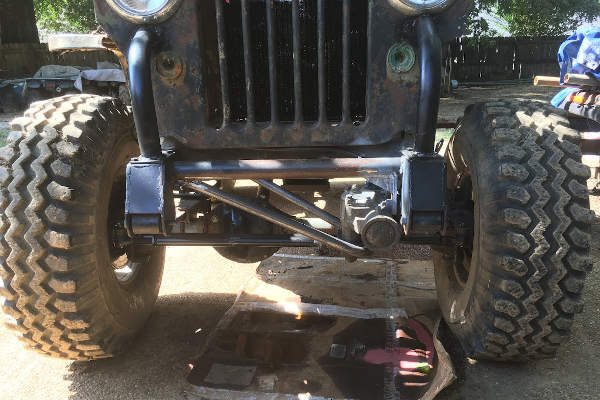 "The suspension is YJ springs over the axle with shackle reversal. I have yet to experience death wobble or bump steer." 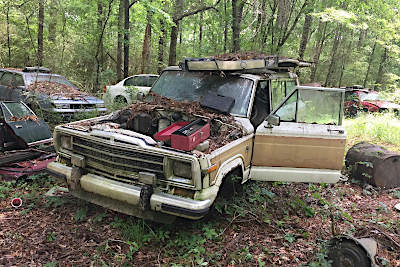 "The steering column, gear, and power steering pump (160K JPEG) are from an '86 Wagoneer." 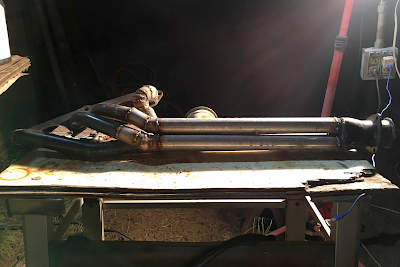 "I made a custom header for the F134 (170K JPEG). The factory replacement engine was donated by a fellow Jeep enthusiast from his 3B. I have also modified some F134 parts to get more power out of it. One of which is I took .125 off the cylinder head and balanced the rotating assembly. Sadly it will still only be an engine with 8:1 compression when assembled. 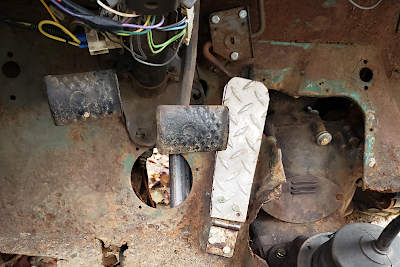 "I'm using a cable-type throttle pedal and cable from the Wagoneer." 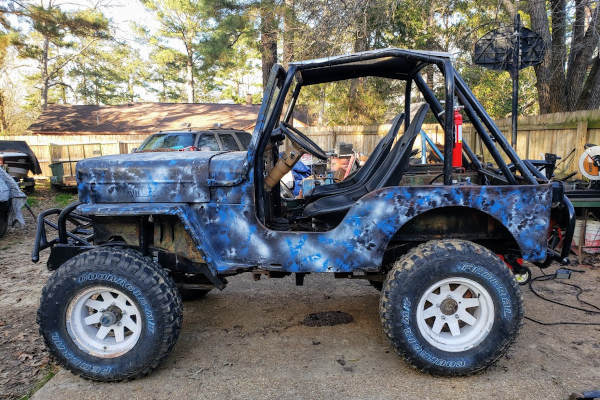 "I have reinstalled the Jackman wheels (dated 1974) and have been using the Jeep as a workhorse around the house. It's under the knife again so I can make a few changes and new additions like a parking brake and a rear mounted fuel tank (160K JPEG) under the bed." 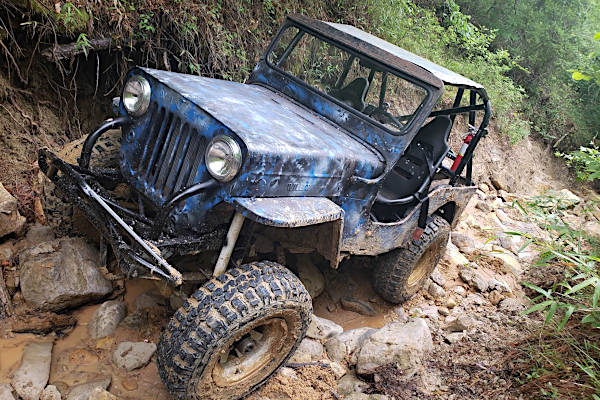 David has also welded up a front bush bar including protection for the steering, and a new transmission cross-member (260K JPEG) to gain ground clearance. 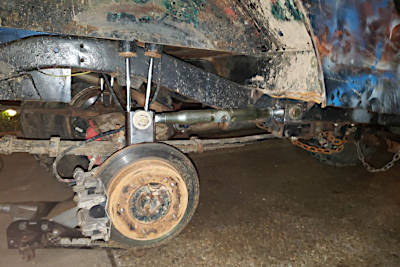 Spring 2021 update from David: "I built a 10 gallon fuel tank (200K JPEG) for it out of 1/8 steel, made the sidebars, got the safety nets and hardware all figured out and approved by the race rules guy, added driveshaft loops (3/8 chain), installed a rebuilt steering gear as the old one failed internally while on my first off road trip, added Ford electronic rear parking brakes that operate independently of each other." 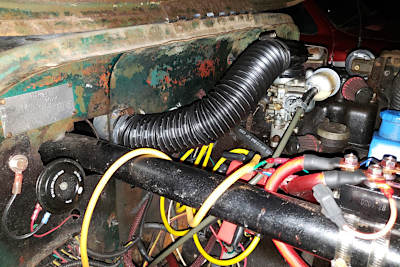 "Rewired the Jeep to be within spec for the race, re-ran my fuel line to race spec, built a transmission tunnel cover, added a Mopar RV2 compressor to it for OBA, installed an aftermarket aluminum '60s mustang radiator and fabricated custom brackets to mount it to the frame and roll cage runners." 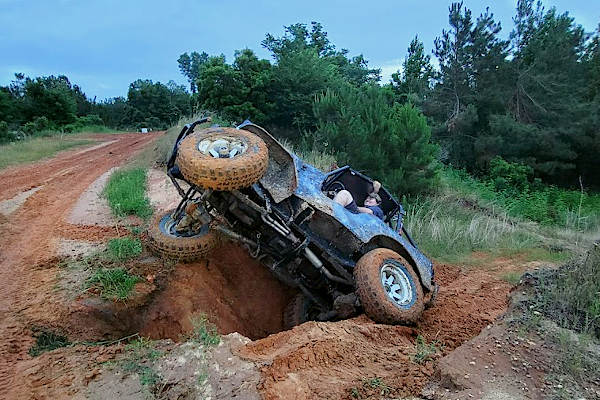 "Rebuilt the header and made an exhaust for it, resealed the D20 and removed the shifter pills to have the option of a front dig, and I have a few other things in the works for it also like flanged full float axles for the D44, 2.46 low range, intermediate gear tapered roller bearing upgrade, and a Warn 8200 winch (360K JPEG). The old F-head shows wear, but I've managed to clock around 350-360 miles on her so far with nary a problem. Street manners are much better than expected and it will do 60 @ 3,000 RPM but at the cost of fuel economy."

Thanks to Ryan and David for the photos. Look for them at Line Mountain! -- Derek Redmond

Elsewhere on the web, see Another Rebirth For The 3B, Ryan's thread for his new 2021 rebuild, at EarlyCJ5.com.