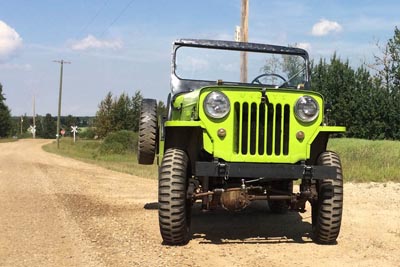 One of the Jeeps from our 2008 Dilapidated CJ-3B Competition has undergone a remarkable transformation. Dave Fedor of Leduc County, Alberta (just south of Edmonton) wrote to say, "A few years ago I submitted my B for the Dilapidated CJ-3B Contest (entry #10, 'Sweet Sixteen'), and with the help of CJ3B.info and Bulletin Board (and a lot of work) it's finally on the road." 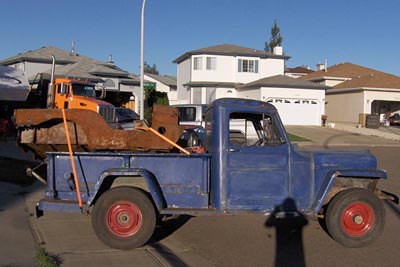 The rusted-out tub with a '61 serial number was a gift from a friend, and Dave brought it home in the '52 Willys truck which he has since sold. The frame was a write-off and his friend kept the axles.

Dave says, "When I got the B, I started with just a body. I was extremely lucky to find a complete frame and running gear for sale on the local Kijiji -- the owner was swapping his body onto a Chevy Tracker/Suzuki Sidekick frame. (He was asking $60, I gave him $80.)" 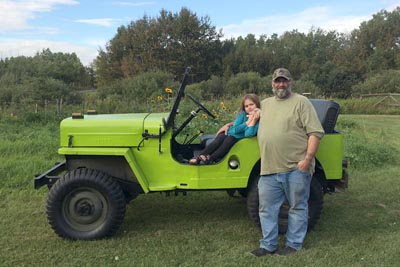 Back in 2008 Dave had said, "Seeing how I'm not overly endowed with common sense, I'm going to rebuild it for my daughter to drive when she's 16. (She's currently 2 days old so I should have enuff time.)"

Well, he made it with 10 years to spare. He now says, "In the short time I've been driving it, it's been mostly used as a sunny day commuter car. It sure makes me happy to drive it to and from work, and my daughter is almost as excited as me to go for a ride." 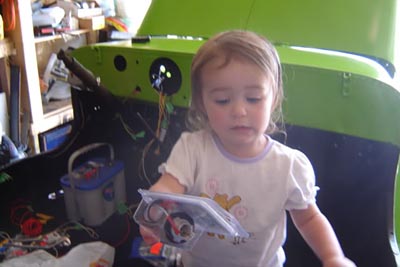 Dave snapped this photo a few years ago of his daughter Ava giving him a hand with the wiring: "She's been helping me with it since she could walk. I'm not sure if she thought old Jeeps were supposed to move by themselves." 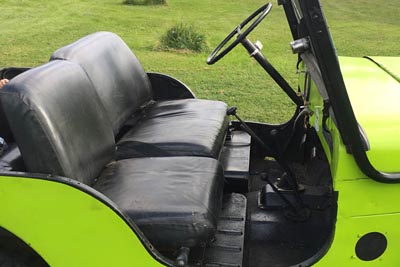 The F-head engine is stock with the exception of a 12-volt alternator. The interior features a set of 60-40 seats out of a CJ-5, and a rear seat from a Willys wagon. The latest addition to the Jeep is a Warn overdrive, and Dave says it cruises happily at 45-55 MPH, even with the NDT's.

He adds, "Most parts were either swapped from friends, bought at the Red Deer swap meet (Alberta Antique Willys Association has a table there usually) or from The CJ3B Bulletin Board, or ordered from Walcks Four Wheel Drive when funds permitted." 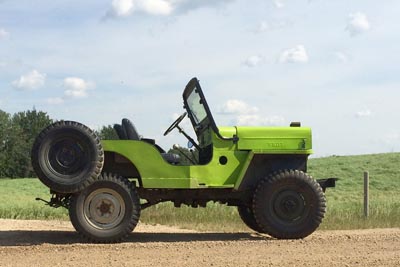 Dave says, "Oldtime on the BB recently helped me diagnose a front-end shake as worn king pin bearings, so that's on the list for attention this winter. It still needs a few finishing details as well, but I plan on plugging away at them when funds and time permit. The paint is industrial enamel, and the color is one I matched up with a local scrap dealer's scrap bins (General Scrap) -- I figured it would save time if I couldn't get it fixed. :)"

Thanks to Dave for the photos. I like the color! -- Derek Redmond