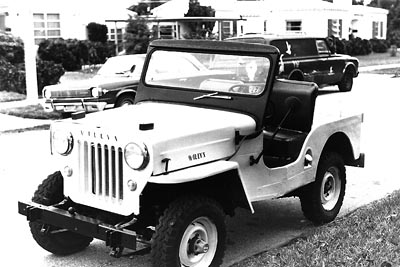 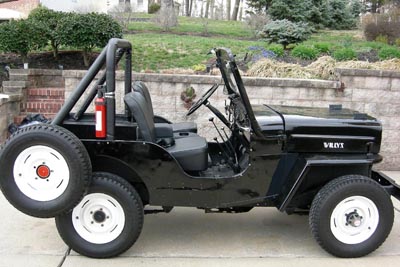 After Miami we ended up in Omaha NE, then Orlando, Cincinnati and here in Pennsylvania since 1993. Has about 50,000 miles -- I am the second owner. Fewer Jeeps were made in 1958 than any other year, and many CJ-3Bs in 1958 went to Australia. 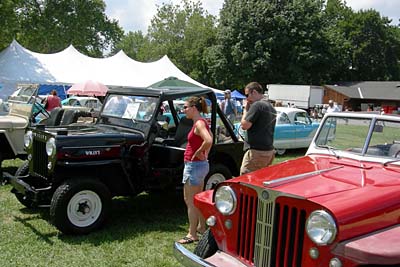 I started a July 4, 2000 weekend project that lasted until late 2005.  (One of the most difficult tasks was to re-engineer the steering tube for the horn wire to work as Toledo intended.  I used a freeze plug with a section of steel brake line brazed to center, installed using epoxy around plug to steering box.)

The 3B made its car show debut at the 43rd annual Das Awkscht Fescht in Macungie PA in August 2006 (left).  We were one of twelve Willys; we drove 60 miles round trip, and had hundreds of onlookers. 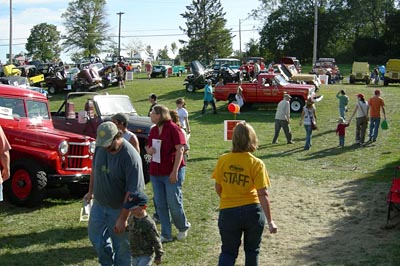 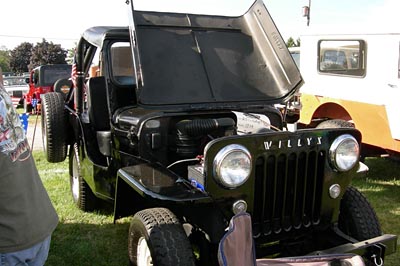 I have left the body work as is since the 1970’s, due to two friends (Dale and Paul) who helped me with the Jeep, who are both now gone.

I have had 13 people in the Jeep at one time (University of Florida in Gainesville, in the 1970’s.) I have carried sofas, washing machines, 15-foot trees, and 12 pieces of ¾” plywood. 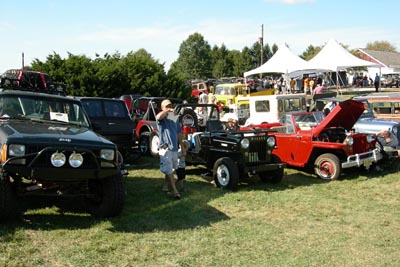 Next to a Jeepster at Jeff Daniel's Jeep Show in 2010. I put a mirror underneath (70K JPEG) so pepople can see the PTO Dualmatic overdrive, which provides for a 25% engine revolution reduction in all gears.

See also the tailgate with gas can and tool rack (80K JPEG). 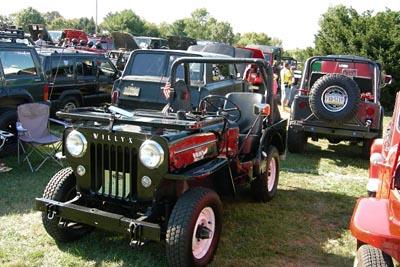 A little philosophy if I might: These old vehicles are becoming increasingly scarce -- they don’t make them any more. They don’t drive, handle or brake like newer vehicles. If you want all the modern conveniences, don’t buy an old Jeep and stick a V8 or even a V6 in it. You will quickly need a different transmission, new axles and bigger brakes. Save the old Jeeps for people who want to restore and appreciate them for what they are. We don’t own these things; we are simply curators of these bits of moving industrial archaeology. 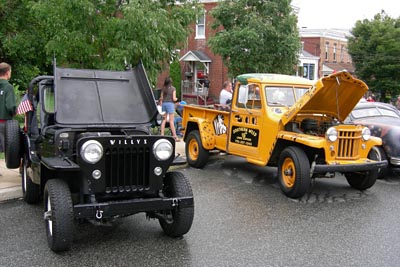 With the 3B pretty much just like I wanted it since 2005, I have been looking for another project. I always liked the first Jeep pickups, made from 1947 to 1962, and thought they had tremendous potential as a project vehicle. After looking for about three years I finally found a pickup I wanted. I was particularly impressed at the original nature of the Jeep and the lack of significant rust.

I was not too excited about the paint job, and began researching original colors, especially the two-tone styles used in 1956. A landscaper had the Jeep painted as an eye-catching advertisement for his business. Two artists painted a wild animal motif (90K JPEG) all over the Jeep, as well as signing their names to the spare tire. 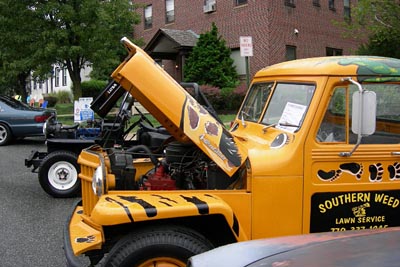 The '56 pickup and '58 CJ-3B side-by-side at the Collegeville Fire Dept. Car Show in 2010. People enjoyed the Jeeps even in the rain, and both Jeeps took a first!

The truck weighs about 3,000 pounds and was the first civilian truck that could carry its own weight. The engine is a flathead 6 (230 cu. in.) that makes 105 horsepower with a 2-bbl carburetor; nice and torquey and runs very well. It has original 6-volt electrics, and less than 40,000 miles on it.


As I worked on the pickup and got used to its idiosyncrasies, I have been putting a few miles on it around town. It has generated so much interest and I get so many high fives, horn toots and claps for the Jeep that I just may keep the paint job with wild animals and all. -- Peirce Eichelberger

Thanks to Peirce for the article and photos. See also his recollections about The Joys of Owning a Willys Jeep on the Kaiser Willys blog. -- Derek Redmond