California 3B is a Retired Hunter

We have a 1956 Willys Jeep CJ-2B with 62,437 original miles on it, in La Crescenta, California, near the Rose Bowl. My father-in-law bought the Jeep new in 1956. He and I put all the miles on the Jeep hunting (primarily deer and ground squirrels) in in and around the Bakersfileld area in the southern Sierra Nevada mountain range. By far the lion's share of the miles on the Jeep were acquired during the towing process going to and from hunting.

When my father-in-law passed away, he left the Jeep to my wife Charlene (his daughter) and me. We put the Jeep in storage for nearly 30 years. In 2015, we pulled the Jeep out of storage and I started to bring it back to life. 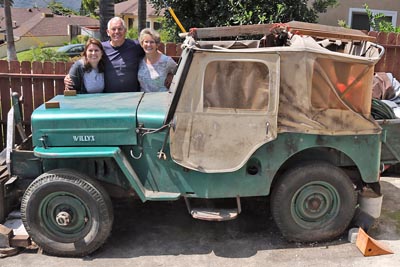 For what it is worth, here is a photo of our Jeep the day we took it out of storage (8 April 2015). The tires were flat and badly cracked, yet they aired right up. Pictured in the photo is my wife Charlene, our youngest daughter Teri, and myself. 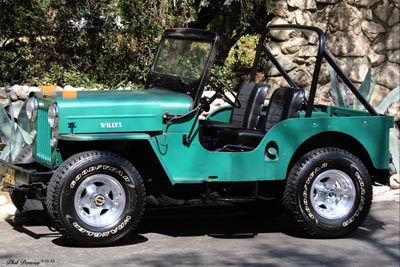 The Jeep came a long way in the next few months. The CJ-3B is totally original, is in very good shape, and runs like a sewing machine. I just made one change; I put fancy rims and tires on it. I still have and will hold onto the original rims.

I try to do some kind of facelift on the Jeep most every week; in time (plus money) I'll have the Jeep as pristine as I can make it. I just came from a local car show -- I'm always amazed at how interested people are in this old Jeep. 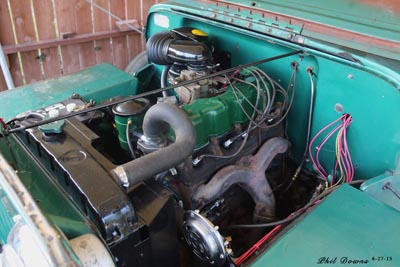 On 27 June 2015 the Jeep made its "maiden voyage" after 30 years of storage. The engine is tuned up and running like a purring kitten.

I took before and after photos of the horn (230K JPEG). 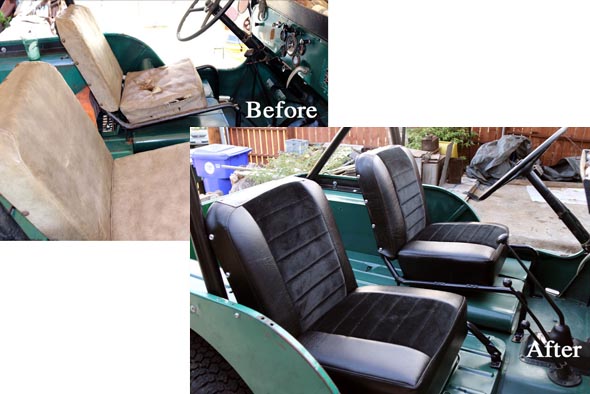 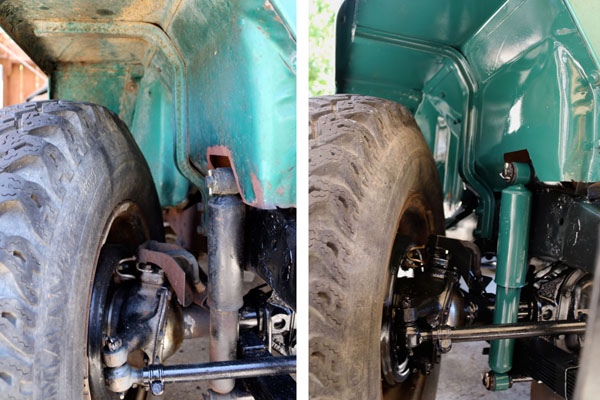 This is the right front fender well, before and after its facelift.

During the late 1950s and 60's my father-in-law, Charles E. Tanner, and I were avid deer and ground squirrel hunters. The deer served as table meat and the ground squirrel served to sharpen our marksmanship while thinning the overabundant and destructive ground squirrel population, that was troublesome to ranchers. 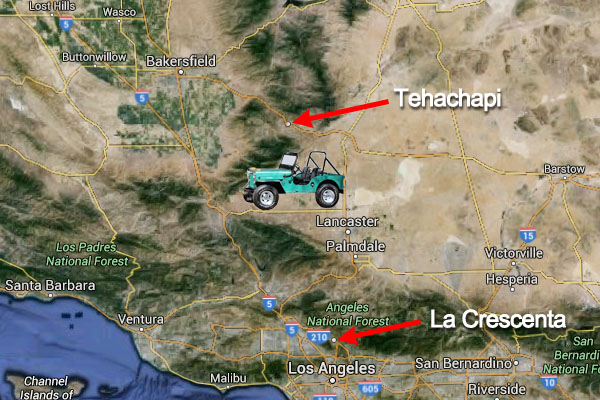 My wife and I and our two young girls lived in the mountain community of Tehachapi (4000 foot elevation, with a population of 4,000, in the southern tip of the Sierra Nevada Mountains.) Charlene's parents lived 40 miles west of us in Bakersfield.

I had access to several large cattle ranches that were spread out through the Tehachapi Mountain range of the Sierra Nevadas. The Tehachapi Range runs east and south of Bakersfield with several mountain peaks in the elevation range of 7,000 feet. In those days the deer hunting in this area was the very best I have ever seen anywhere in my life.

Every deer season for 10 to 15 years, deer hunting took priority over all other sport activities. My father-in-law and I camped out in the Tehachapi Mountains for days at a time with his trusty 1956 Willys CJ-3B Jeep at our side or under us. We were well-known for our in-depth knowledge of the area and deer hunting skills.

California Fish and Game laws limited individuals to only one forked horn (or better) mule deer per annual hunting season. So, to extend our hunting privileges and time, we served as guides for other hunters, which kept us hunting throughout the season. We always took our deer at the end of the season; we knew where the trophy deer hung out and we saved the best for the end of season.

As any good hunter knows, you don’t have to be shooting to enjoy hunting. It is very exciting to take a beginning hunter by the hand and expose him, or her, to the opportunity to score at deer hunting; should they fail at the last moment, it was always understood that we would help them fill their deer tag. 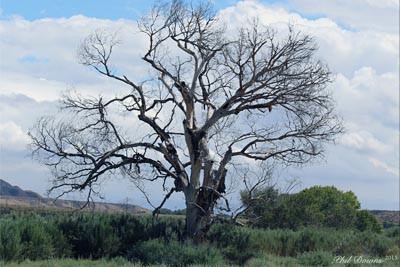 Hunting possibilities slowly disappeared due to population encroachment and large land developers. The population of the greater Bakersfield area is now pushing one million. Our little town of Tehachapi has grown 20-fold. All but one of those big ranches have sold out to developers who turned the area into beautiful housing communities with massive and impressive golf courses. Yes, the deer are still there, not in the same numbers, but hunting is absolutely forbidden.

A little over 30 years ago my favorite hunting buddy, my father-in-law, passed away. The Jeep became my charge and I put it in storage. My profession took me and my family to the big city of Los Angeles County, where we remain today.

I no longer hunt with a gun; I now choose to hunt with a sophisticated Canon camera. Note the handsome naked tree in this photo that I shot out of my Jeep. The tree has seen better days, but it sure looked pretty standing strong and proud under a cloud-laced light blue sky. I'll bet that tree could tell some wild tales about things that happened under it as its reaching branches softened a hot afternoon sun or filtered the peering light of a full moon. 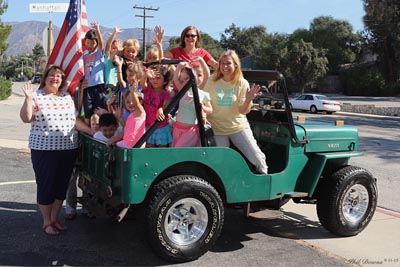 The Jeep is now exposed to the densely populated concrete and asphalt streets of Los Angeles County -- a far cry from our hunting days.

I took this photo of a class of 4-year-olds with their teachers; the photo spread all over our community including the local newspapers. By the way, the kids were so cute and were very excited that all of them were able to get in the back of the Jeep. 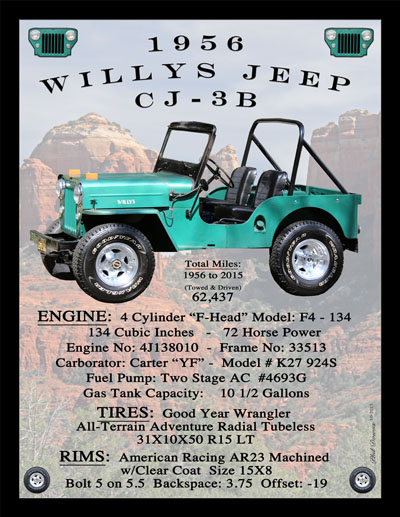 My grandson owns two Golden Spoon yogurt stores and a third business, L.A. City Selfies (a high-tech photo system used at weddings and special events.) The Jeep is very eye-catching and popular with young folks, and he visualizes using it in Golden Spoon promotions and as a photo prop for L.A. City Selfies.

I am really surprised at the interest young kids and adults have in the Jeep. I have found that young adults love to sit in the Jeep and have their picture taken with their cell phones/cameras. I had my Jeep out on September 11 for our community's 9-11 Remembrance Parade; lots of photos were taken of the Jeep that day.

The Jeep is now also standing tall and proud in local car shows; both young and old find pleasure in viewing the old Jeep and dreaming of its heyday. I made up this poster to use at the shows; this will help to answer the popular questions I get about the Jeep. -- Phil Downs

Thanks to Phil and Charlene Downs for the story and photos. -- Derek Redmond