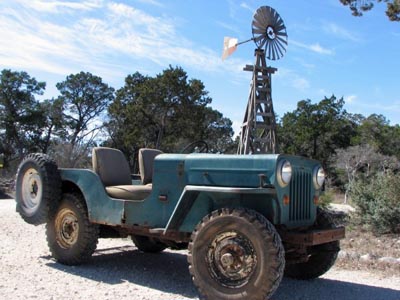 Of course there's a lot of room for Jeeps in the Lone Star State. And a big part of the economy of the state has always been the resource and agricultural sectors, which were prime targets of Jeep marketing in that era. But it's also interesting to speculate about whether a few of the 3B's intended for export to Latin America got sidetracked in Texas. 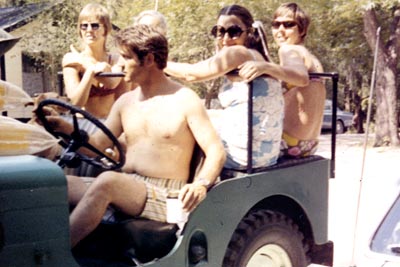 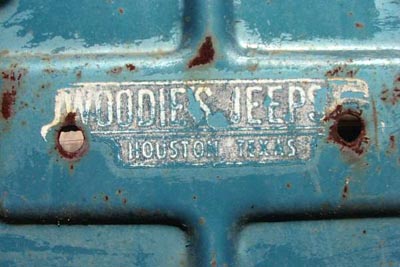 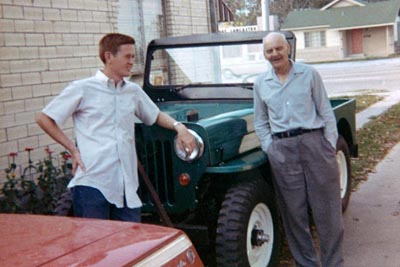 This photo shows Chet's uncle and great-grandfather, outside his grandfather's dry cleaning shop (Santa Rosa Cleaners) in Houston, about 1967. Later, Chet learned to drive in the Jeep when he was a teenager. Now, as of early 2007, Chet announced on the old CJ-3B Bulletin Board that he is planning to restore it to stock condition: "I think the word is restoration... but I am not sure how far to take it. I would like to get it back to looking original. I am not looking for a 'show Jeep,' as I plan to keep using it for hunting and fishing adventures. I also don't plan to add any upgrades that would detract from the original appearance." 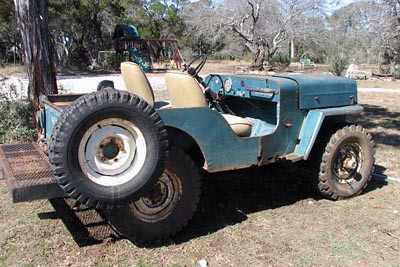 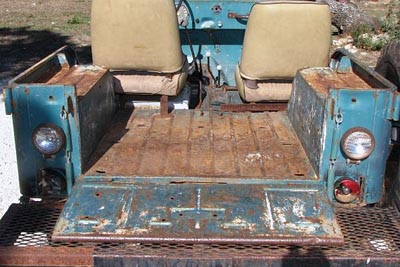 There is no additional charge included on the dealer's invoice (70K JPEG) for a Passenger Safety Rail. But it may well have been ordered through Woodie's parts department.

Oldtime continued: "So Chet, you may want to take careful note when removing your PSR. Note whether or not the bolts are of the correct specification. Out of round holes would indicate non-factory drilling. Is there any paint on the edges of the holes? This could indicate possible factory installation as opposed to being drilled later at a dealership or elsewhere." 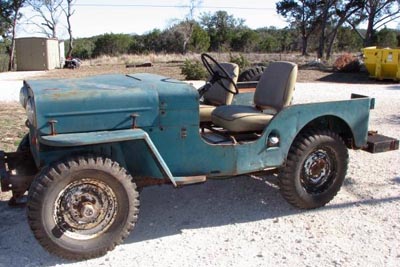 
A real surprise on the Bulletin Board was a posting from Larry: "You fellas won't believe this story, but last evening I had the chance to visit with Chet via telephone (he's only a little over 100 miles to the west of me) about his Jeep. Turns out that I went through school in southeast Houston with Chet's mother and uncle as I grew up only a few blocks over from them. I remember very well when Chet's grandfather (owner of a local laundry and cleaner's establishment) bought that Jeep and drove it to work on a regular basis (the business was only a few blocks east of his home). Chet's uncle used to drive it around the neighborhood from time to time, and as one of his friends, I remember riding in that Jeep."

The restored historical Texas town of Gruene (pronounced "green") was the perfect place for some first photos of Chet Couvillon's restored 1965 CJ-3B. Chet's 2010 restoration is the latest chapter in the Jeep's 45-year history in his family, and I'll let him tell the story. -- Derek Redmond 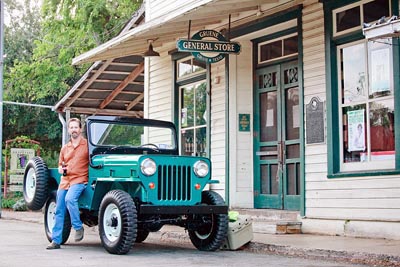 Everyone in my family simply referred to it as "The Jeep." We never knew what kind of Jeep it was and probably still wouldn't, had it not been for CJ3B.info. I turned to the internet in the mid-90's to find information about the Jeep. It was CJ3B.info that taught me more in one day than anyone in my family knew about the Jeep in the 40+ years we had owned it. 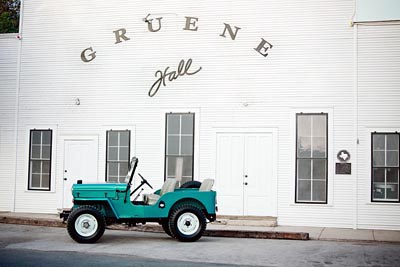 High hood Jeeps are part of Texas history, and as of 2010 can still be found in use on ranches and oilfields. (See Oilfield Jeep on CJ3B.info.)

This photo was taken in front of Gruene Hall, which is the oldest dance hall in Texas, built in 1878.

(Gruene Hall is still in operation too, and bands playing there during October and November 2010 include CJ3B.info favorites Tanya Tucker, Delbert McClinton and Lyle Lovett. Thanks to Caressa Vajdos for the photos taken in Gruene. -- Derek) 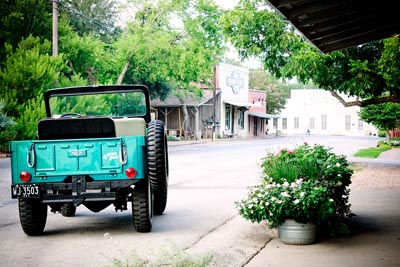 It was on CJ3B.info that I caught the bug, the Jeep restoration bug. Seeing all the pretty pictures of 3B's and how glorious they looked when new, made me nostalgic and somewhat sad to see what my 3B had become. To say I became "green with envy" whenever I saw someone complete a 3B restoration and bring their Jeep back to original condition was an understatement. My restoration bug started out to be just a minor fix up. Boy, I had no idea what I was in for! 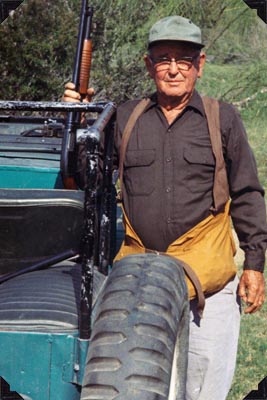 From as far back as I remember this Jeep has been a part of my life. It holds many special memories of family and friends from the past 44 years. My grandfather, George Chester Grimes (left, in 1975) bought this Jeep in 1964 from Woodies Jeeps in Houston, Texas.

A short 18 months later I was born and as you can see wasted no time in climbing behind the wheel (below, 1967). Ever since this first photo, I always remember happy times behind the wheel. Growing up, when fun was on the agenda, the Jeep was there. Spending summers on Galveston Island, going to "The Other Place" on the Comal River in New Braunfels. See a home movie clip of the family, including Dixie the dog, driving off to float the Comal River, on YouTube. 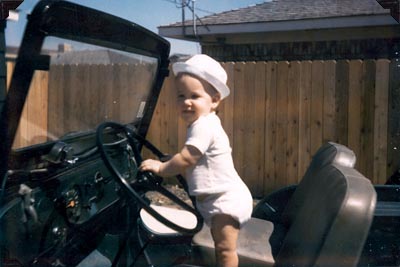 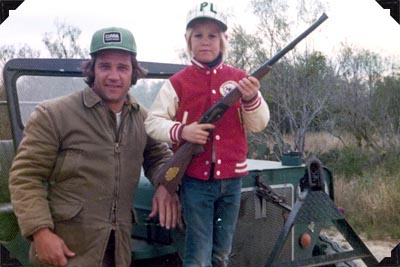 And of course hunting. This Jeep was purchased to be a hunting vehicle and spent most of its life either on a deer lease or being "flat towed" all across Texas to a deer lease (left, me and my Dad in South Texas, 1974). Doing hard time on deer leases take a toll on a vehicle and many things were added or removed to make hunting life easier. Bumpers were fabricated to hold extra seats, holes were drilled for gun racks, and a broken windshield was removed and discarded. 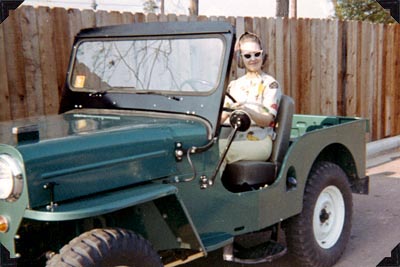 But I also had the photo of my Mom driving the Jeep when it was brand new, which has been posted on CJ3B.info for years. What started innocently enough as a plan to just fix the Jeep up and get it roadworthy, quickly became an obsession to return it to that showroom condition. 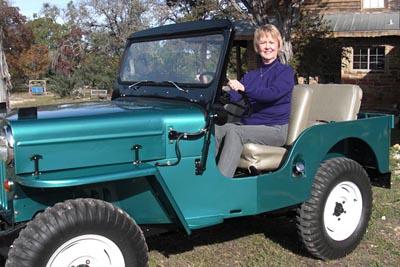 Searching for quality old parts I was introduced to my now favorite acronym, NOS (New Old Stock.) "Go NOS or Go Home" soon became my motto for the restoration, and it helped me get it to the point where Mom could sit in it again, looking exactly like 1965 (right). The only thing missing was the sunglasses. 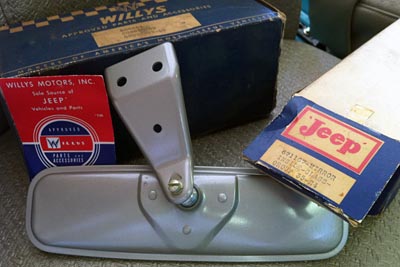 With the advent of eBay, Jeep restoration has become more accessible. I have come to realize that you can get anything you want with the internet and a credit card, including many NOS goodies (120K JPEGs):

During my restoration a few non-stock upgrades were also added (120K JPEGs): 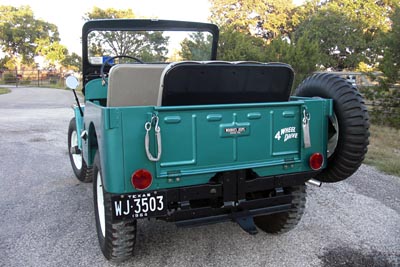 The many parts sources listed on CJ3B.info were consulted, and I was fortunate to find Vintage Jeep Parts in Beasley, Texas. Russell Anderson, his wife, and son Brad are the First Family of old Jeeps here in Texas. Sure they know old Jeeps, but more importantly, they take the time to understand the needs of the customer. Not only were they my primary part supplier, they also helped in the restoration. I figured I could tackle most of the mechanical stuff, but knew that body work and painting was not my cup of tea. Vintage Jeep Parts helped me order all the right parts, gave great advice along the way, and turned an MD Juan body tub into a work of art (170K JPEG).


What's that on the side of your jeep? 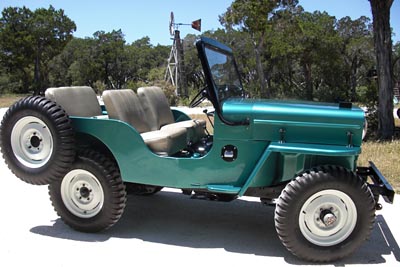 My Grandfather purchased the Jeep, but would often be found riding in the passenger seat. This led to a couple of non-standard 3B accessories being added on that side of the vehicle.

The Passenger Safety Rail for him to hang onto while he criticized your driving technique was added, but the second non-standard 3B accessory is my favorite. He would always start the day drinking Coca-Cola out of the small 8 oz. bottles, and would later switch to the "pop with the foam on top." Both of them would require a bottle opener, so he mounted one at a very convenient location: the cover plate for the fresh air style heater. 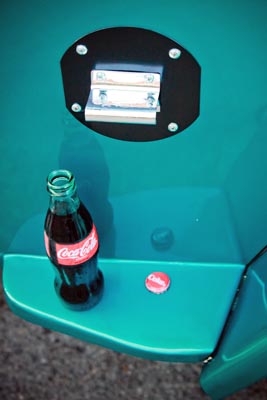 I did acquire a fresh air heater in great condition, but can't bring myself to remove the cover plate to install it. When it gets cold, I'll just put on a bigger coat.


As for now, I no longer chat with the UPS man every day, and the eBay purchases have slowed down to a trickle. I guess you could say my restoration has reached a comfortable plateau. I continue to check CJ3B.info for tips, advice, and to see all the great 3B photos that gave me the inspiration to tackle this project. Could someone restore a Jeep without CJ3B.info? Perhaps, but there is no way I could have restored my family CJ-3B to this level of satisfaction without CJ3B.info! -- Chet Couvillon

See photos of Chet On the Show Circuit in Texas.

Thanks to Chet for the great photos and story of the restoration. You can see the start-to-finish slide show on YouTube. Also his fun "Agent CJ-3B" video in HD or low-res. -- Derek Redmond