Charlie sent this story about his project, and I titled it "Charlie's Garage" because there are photos of the Jeep from just about every angle, so we also get to see just about every corner of his well-equipped and spotless shop. -- Derek Redmond 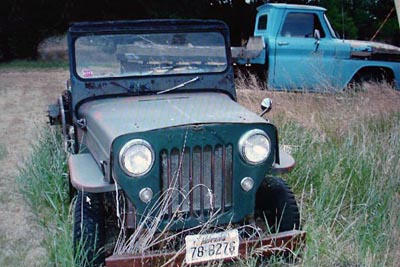 I had been eyeballing the Jeep on my cousin's farm in Western Nebraska for more than 8 years and finally talked him out of it, or he talked me into it, I don't know which. Gary and Naomi Bruns of Chappell, Nebraska were the second owners of the Jeep and they used it around their vacation home at Lake McConaughy which is also in Western Nebraska. Anyway, my cousin Gary let me have it and I brought it home to Holbrook, Arizona in June of 2007. 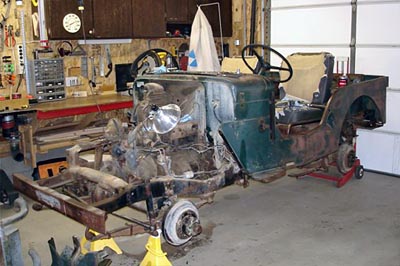 I waited about two weeks and then began to take it apart. The disassembly was nasty and dirty and not too much fun. I even managed to find a mouse nest in the bellhousing(50K JPEG). While working on it one day in my shop a mouse ran from the bellhousing to a far corner of the shop where I lost track of him. I told a friend who was helping me that it was a Nebraska mouse and he asked me how I knew. I told him the mouse was wearing a red sweater and saying "Go Big Red". 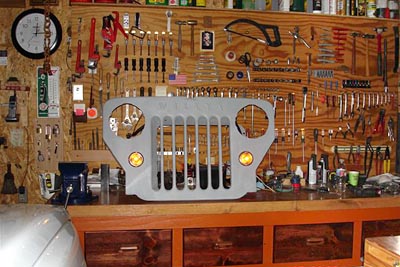 Things got better and I had the frame and some other parts sandblasted by Bebe Powdercoating in Taylor, Arizona. Another friend sealed the axles, transmission, and transfer case. 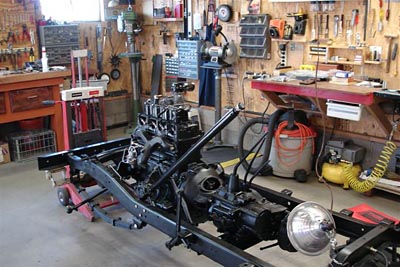 Still another friend helped me overhaul an F-head out of a '57 Jeep pickup. The radiator (70K JPEG) was re-cored and of course new hoses and thermostat were used along with a new water pump. I ended up using a new Solex carb but still have a little grief with it. I used a GM alternator and converted it to 12 volts. Also a starter button was installed on the dash with a solenoid on the inner right fender.

The original engine had sat out on the farm with the head off for about 25 years or so and the pistons were rusted in the block. It will be rebuilt and installed in the future. 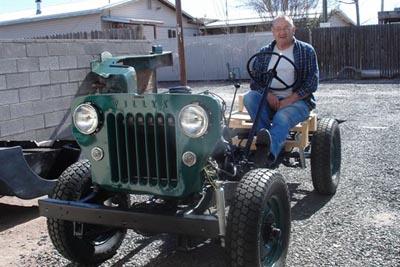 I spent the winter of '07 putting the Jeep together and spending a lot of money for parts replacements. All the brake and steering parts are new and I even learned how to ream the bushings in the Ross steering gear so the sector shaft fit properly. The Jeep drives fairly well considering the technology. 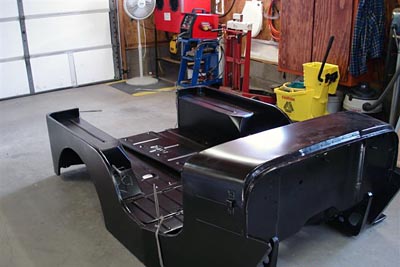 I did have to get a new tub for it but ended up taking the dash (70K JPEG) out of the original tub and putting it into the new one.

When I had a rolling chassis I tried to back it out of the shop and the clutch wouldn't disengage so I could put the tranny in gear. After pulling the tranny and transfer case (two times) it was discovered that the pilot bushing was too tight and it would not let the clutch disengage. 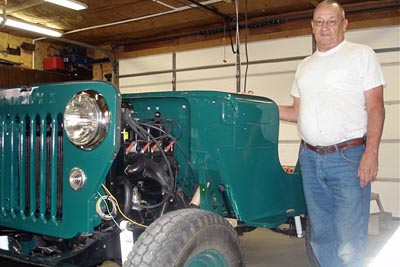 Then came the body work and painting. I now know that I am not a body man and have developed a great amount of respect for those who are. I did, however, buy an hlvp spray gun and painted the Jeep myself. It didn't turn out too bad. From there it was downhill. I put in new Classic Instruments, and a speedometer from Willys Overland. The dash looks great and it also works well, even put in an electric wiper on the driver's side. 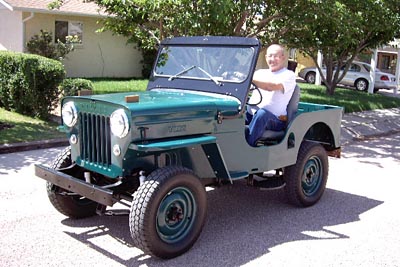 I had the rolling chassis working in May of '08 and got a surprise visit from Gary and Naomi. Gary drove the chassis up and down the alley behind the shop and had a great time. Two weeks after the visit Gary died of heart failure and did not get to see the finished Jeep. I think of him a lot while driving the Jeep.

The Jeep is very fun to drive and all the townspeople remark how nice it looks. It has been a great project. CJ3B.info has provided an enormous amout of good information, as well as my friend Colin Peabody of Phoenix, Arizona. Colin and I go back to 1968 when we both started the academy for the Arizona Highway Patrol. -- Charles Cleveland

Thanks to Colin Peabody for some of the photos, and to Charlie for sending the story. He sold the Jeep a few years later. -- Derek Redmond