Beryl Green Jeep is a Gem 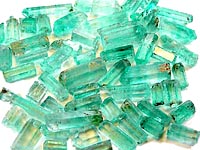 Ever wonder where Willys got the name Beryl Green for one of their mid-fifties paint colors? It comes from the beryllium-based mineral "beryl," which in its purest form is crystal clear, but takes on various colors from different impurities. The most popular colors are the greenish forms known as aquamarine and emerald. Brian Carpenter chose Beryl Green for the Jeep he has spent four years restoring and upgrading in his garage in Richmond, Vermont. The chemical formula for beryl is Be3Al2Si6O18, but for this gem of a Jeep the formula is CJ3B. Here's Brian's story. -- Derek Redmond 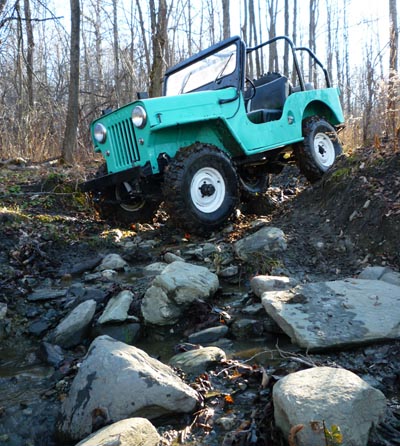 I have been working on the frame-off restoration of a 1955 CJ-3B, serial no. 57348-17385. My wife was pregnant with our first child at the time I bought the Jeep. She is now four years old, and this summer we plan on using the Jeep at last.

The paint is as close to Beryl Green as I could match using the paint chips on CJ3B.info. Honestly, even though my best friend saw it for the first time and instantly proclaimed it to be "Garden Hose Green," I really love it. The antique color makes it stand out without being overly flashy. 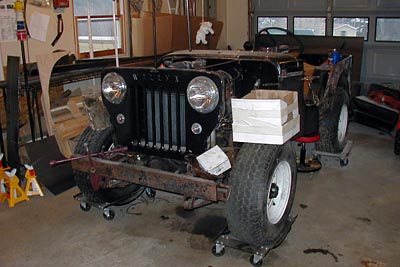 I bought the Willys in Huntington VT, from a fellow who was doing a resto job on a Model T panel truck. He wanted the space in his yard, so I bought the Willys, along with another rolling chassis and two extra motors. We had to cut down trees that had grown up between the leaf springs and the frame rails of the chassis, and through the steering wheel, in order to get it home. 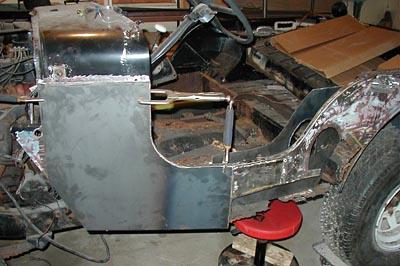 Working on the tub, I patched holes on the driver's side that first winter. It was horribly slow, so on the passenger side, I plated the entire panel with new sheet metal, bung welding it into place. I replaced the floorboards with reproduction parts, and got it reasonably solid. There are still a few holes under the rear seat and over the wheelwells, but I think that just shows its age.

My replacement panels were all made from plain sheet metal. It was a good source because so many of the panels are straight. I did buy the floorpan, though. 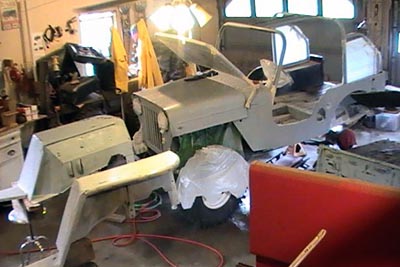 I painted it myself in my garage. You can see how I was planning to paint the windshield and roll bar by moving the hinge. Also, the fenders are bolted to the workbench for paint. 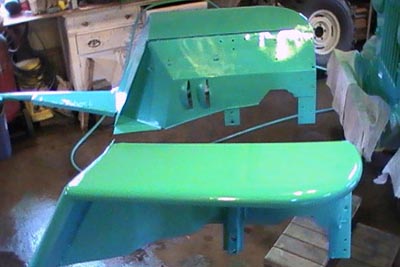 I made the front fenders from scratch with 1-1/2" x .120 wall tubing and a tubing bender, and 1/8-inch plate for the top. I built them strong enough to jack the vehicle up from them, though after I painted them, I will probably never do it. They have bars that tie back to the rear wheel wells like a rock slider as well. I don't think that they are going anywhere. The only thing I do worry about is scratches in the paint when I'm working on the Jeep. 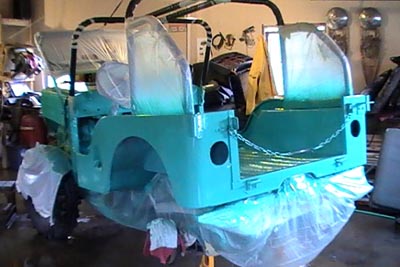 When the paint was done, I was pulling it outside for the first rays of sun and forgot to undo a shock cord that was attached to the footman loop on the front windshield. It stretched about 15 feet and then snapped back, breaking the windshield. That is the last major thing on my list, and will be the end of the restoration, hopefully sometime this year when tax money comes in. 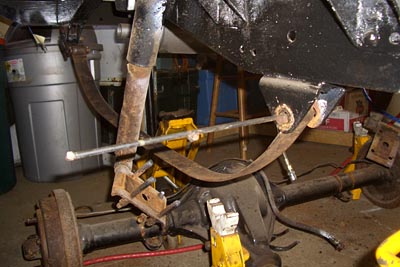 This was a weak attempt to re-arch the springs with a hammer. This shows the main leaf only. Man, those guys who did this on a regular basis to gain lift years ago really had to learn the right touch. By the time I finished with the rear springs, they were too short for the hangers, and provided about 8 inches of lift too. Giving up on that, I bought a 4-inch lift for a CJ-5 from Superlift, built my own hangers and mounted it under the Jeep. I had to whittle away a bit of the metal in order to get the u-bolts to work, but it is more than stiff enough.

With so little weight in the Willys, I am still using the stock shackles. I worried about snapping them back on themselves, but I can hardly get the springs to flex at all. 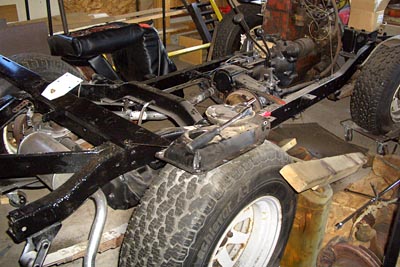 This is the frame after repairs and paint, looking towards the engine (140K JPEG). I worked for a year on the engine, and faced common problems such as breaking the last exhaust manifold bolt (and about four extractors), but I learned how to work on a points-type ignition. I went with the modern oil filter so that I could find replacements at NAPA.

I used a v-groove 95-amp alternator from a Ford Mustang, and fabricated my own brackets. I think that it technically is running backwards, but that hasn't proven to be a problem. I completely rewired the electrical using tube fuses in a block under the dash, though I still need to work some bugs out of the turn signal setup. 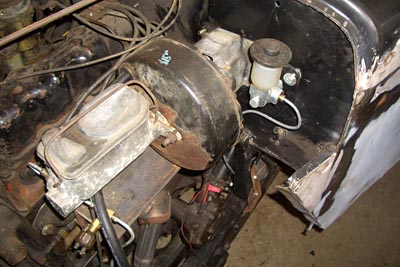 This shows the modern hydraulics and the vacuum assist for the brakes -- the booster was out of a salvage yard CJ-7. It runs off of the vacuum line formerly for the wipers (they became electric.) 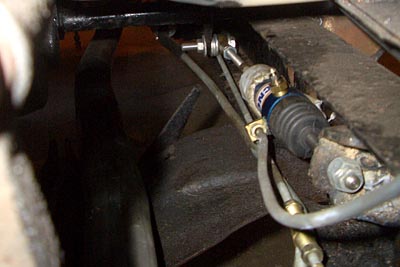 Here's the hydraulic clutch slave cylinder mounted to the driver's framerail as seen looking past the exhaust. I went with a full modern hanging pedal assembly out of that same CJ-7. I added a hydraulic clutch master cylinder off a Cherokee, and the slave I got from a racing store. It is a simple external pull-type slave, and it was easy to build into the existing cam assembly clutch linkage. 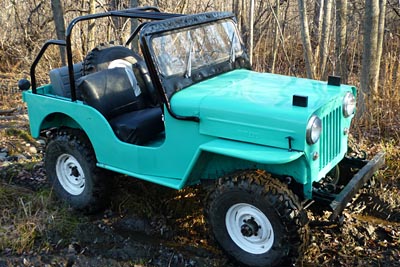 I built my own roll bar, tying it in to the cowl and the fenderwells. I plan to bring those mounts to the frame some day.

These photos were taken on a class IV (unmaintained) road called Hayden Hill Road, in Hinesburg VT, not far from my place in Richmond. I am running 34x9.5x15 Super Swamper LTB's. After these pictures were taken, I built a rear tire carrier with mounts for a high-lift jack and CB antenna. 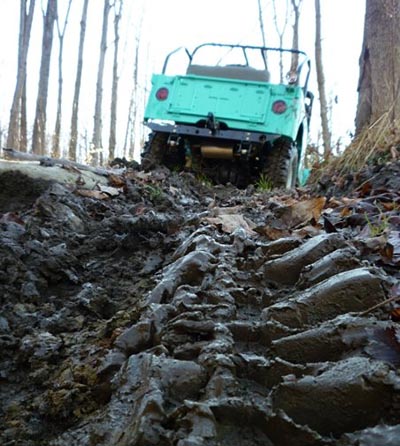 When I went to get it registered, the folks at DMV suggested its value to be $3500, and because of the 65-year-old girl's age, they offered antique plates. I refused the antique status because there have been enough upgrades to important systems that she is reliable enough to be used as a daily driver -- once I get that one turn signal to flash when the other one does.

I am so excited for the Willys to be running that I have thought about letting the registration on my XJ slip, and Jeeping in the Willys instead this year. My wife is worried about bugs and the rain without a top on the trail, though.

Thanks to Brian for the story and photos. -- Derek Redmond