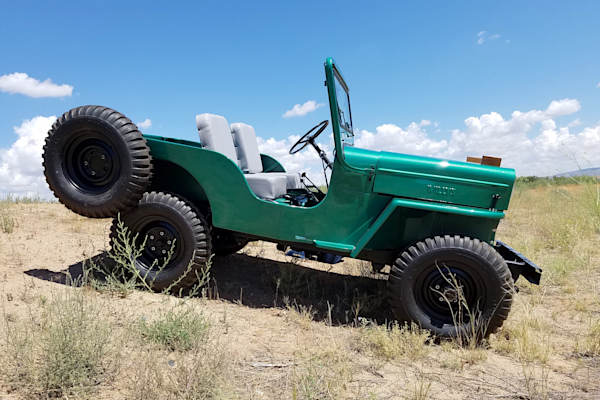 Randall Baldauf wrote in early 2019 to say that his father, Robert (Bob) Baldauf, had purchased a 1955 CJ-3B in 1957. After Bob passed away in 2002 in Wisconsin, Randall inherited the Jeep and brought it to Arizona.

Seventeen years later he was finally beginning a restoration, and in late 2020 he wrote again to say that the project was now 99% complete. And he sent some of his and his brothers' memories of the Willys. -- Derek Redmond 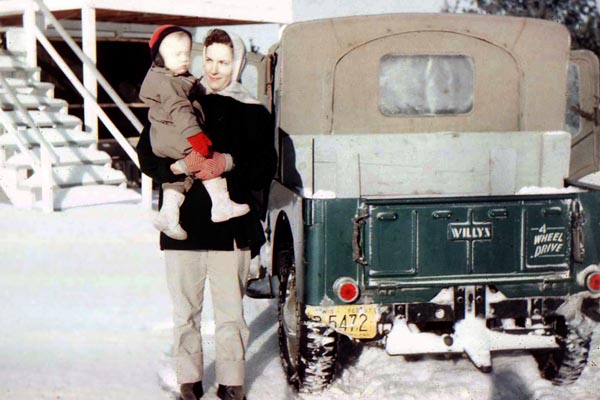 That's Mom and my brother Rob (Mom's favorite) in Wisconsin in 1957. Dad used the Jeep to drive from Chicago where he worked, to Northern Wisconsin where his family lived. Quite a ride every other weekend.

The odometer broke in 1959 with 41,000 miles on it. Dad put it through the ice on Trude Lake (Northern WI) one year, plowing us kids an ice skating rink. Boy, do I have memories of that Jeep!

My grandfather (Rudy Baldauf) bought a resort on Trude Lake in the late 40s, early 50s. He was my dad's father and that side of the family lived at the resort and pretty much worked it all the time, worked our asses off all summer and had the winters to try and keep warm. My aunt, Dad's sister, and her family lived in Chicago. They had four kids, our first cousins, and as they got older they would take turns coming up for the summer and helping out with the resort. They also grew up with that Jeep. The people that came up to the resort would all try to come up the same one or two weeks every year so it was like having a revolving different community every couple of weeks. Fishermen all summer, families after school till they went back, and hunters in the fall. Everyone knew that Jeep and probably had stories. 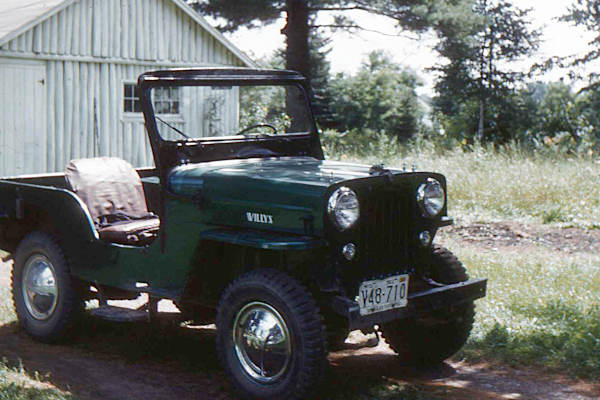 My brother Rob tells me, "I remember the hundreds of miles we drove bird hunting every fall. Gram would be dressed in warm clothes sitting in the Jeep waiting for us to get off the bus, because she loved to go for rides in the woods while we road hunted.

Garbage day at the resort would result in six or seven kids piled in the Jeep with the garbage, because everyone liked to go to the dump because there was always a chance of seeing a bear or skunk rooting around in the trash.

Dad used to plow roads all over the lake and a big ice rink for us to skate on. Once the front of the Jeep fell through the ice while he was plowing the rink. Took a while but we come-a-longed it out. Good times were had in that old Jeep."

My other brother Rick says, "Perhaps my fondest memories revolve around our grandfather. He taught me how to drive in this Jeep. We lived well off the beaten path -- gravel road about six miles to the closest blacktop. When I was about 11 and we needed to go to town for something, Gramps would let me drive till we got to the blacktop. I'll always remember that!

"Also, when I was old enough to hunt he'd drive the Jeep to a forest road and would meet the school bus on my way home. I'd exit the bus, jump in the back of the Jeep and he'd drive on these barely passable trails, both of us looking for ruffled grouse. When spotted, I'd jump off the back, load the shotgun and hopefully bag the bird. We'd do this 2-3 times a week during grouse season. Another great memory I'll forever be thankful for!" 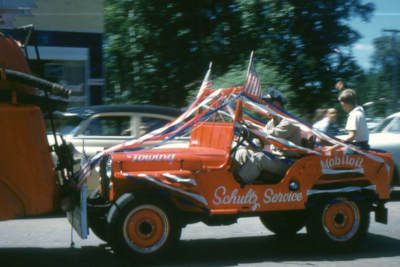 Here's a picture of Hibby Schultz's service Jeep. He owned the Standard service station and my dad used to help him out. He also stood up at our parents' wedding. I've got more pictures of his CJ-2A than I do of Dad's CJ-3B! 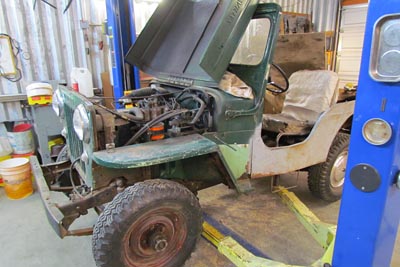 Dad was pretty proud of his Willys from the time he bought it till when he passed away in 2002. By that time the floorboards and Jeep sides had been replaced, crudely. The engine had been rebuilt decades before, seats were replaced (260K JPEG), and it had two 6-gallon boat tanks in the back for gas. I can remember him plowing with no top, no heater, 20 below after a storm. A hardier man than me. 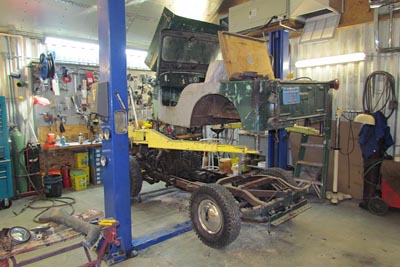 I bought the Bison lift in 2006, for $1400 delivered to the curb. The model number is TP9KAF. Its a 9,000 pound. If I had it to do all over I would get the 11K lift cause my Dodge Cummins is too much for it. Any vehicle has to be centered, weight-wise, or it will really struggle getting up in the air. I have replaced the seals in the same cylinder twice.

I'm a hobbyist, so the lift will sit for a month sometimes without use. But when I need it, it's awesome. If I was a professional I would get a high quality lift, but for the money it's been pretty good for the stuff I do. 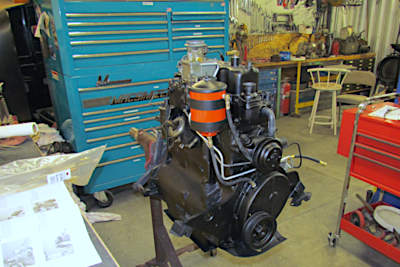 I rebuilt the rear end, front end, transmission, transfer case and engine. There were no issues with the motor, it probably had as many miles in reverse as forward miles. I took it all apart, checked it all out, new rings and bearings, new gaskets. Still drips. 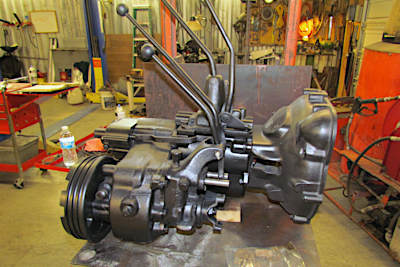 I'm not smart enough, or experienced enough to take everything apart at once so I would start and finish one component at a time.

There is no way, shape or form that I would have started on this project on just any old CJ-3B. If it wasn't my dad's pride and joy, I would've not even considered it. But it went pretty smooth. I did not do any body work or body paint. I've done enough of that to know I'm not good at it and I didn't want to be disappointed every time I looked at it. 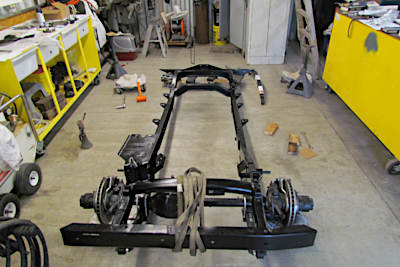 I stripped the frame, repaired what needed repairing, had it powder coated. New suspension kit.

I wanted to make this safer to drive so I purchased a front disc brake conversion kit and installed it. I was told I would have to purchase 'aftermarket rims' cause the 15" or 16" rims wouldn't fit with the 11" rotors. If you want to stick with the narrow rims and stock tires, good luck finding aftermarket rims. You can buy white spoked wide rims but nothing that keeps the stock look, and I searched. 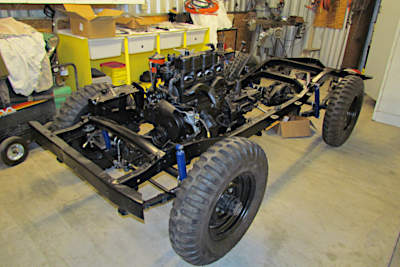 A friend told me about a custom wheel maker in Bellflower CA, Collins Custom Wheels, so I gave them a call and $510, and about two weeks later I had five primed, 5.5-inch-wide Jeep wheels at the door. Cost more than that to have them powder coated. So the rims, powder coating, tires (Coker), tubes and mounting were $1855. 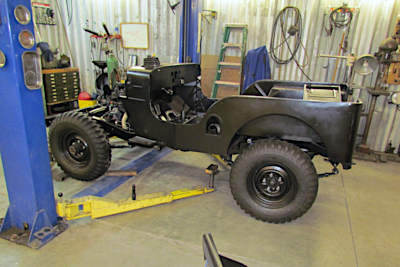 If I had it to do all over I would do the 11" drum brake conversion on four wheels instead of the disc brakes on the front. Chances are good I'm not going to take it up and down mountains, so self-adjusting drum brakes would have saved me the rims and powder coating. But right now it's a roller in the shop. 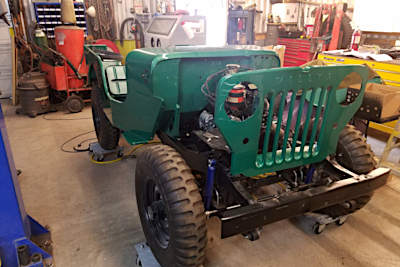 I ordered a complete grille to tailgate body kit. Everyone asks why I didn't put a straight front bumper on it. Cause Dad put every dent and bend and crease in it, that's why! 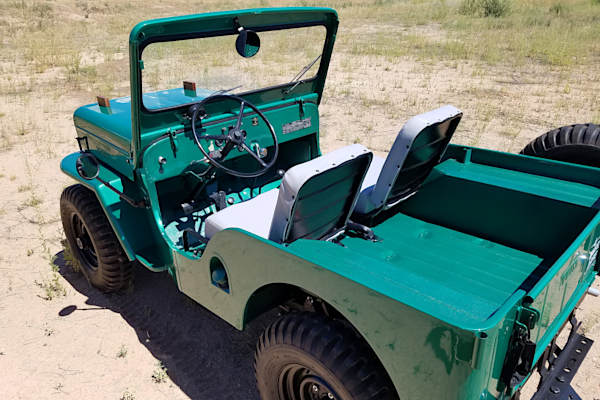 "October 2020, and the CJ-3B is about 99% done, if any Jeep is 99% done. I have the shift boots to do, and hook up the driver's side vacuum wiper. I ordered a back seat frame from Kaiser Willys about 2 or 3 months ago and am still waiting for it. After it gets here my wife Brenda will recover it, as she did the front two seats. She did a good job on them. 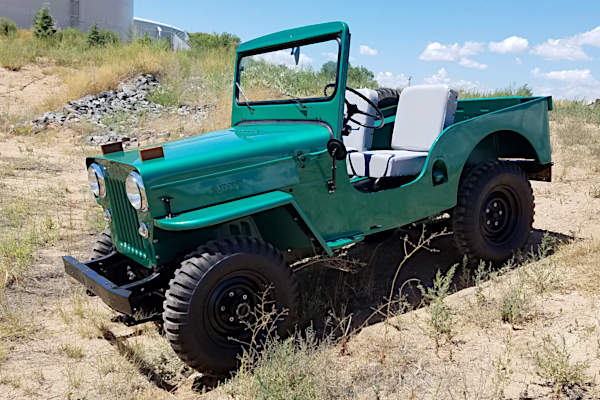 I purchased a rear brake drum conversion from Herm the Overdrive Guy and haven't found the time to install it yet. Other stuff keeps showing up. It's sitting in the garage under a car cover. Next big investment will be a complete canvas halfcab for it, like Dad had. Don't really need one in Arizona though!

Thanks to Randall for the story and photos, and brothers Rob and Rick for their memories. -- Derek Redmond