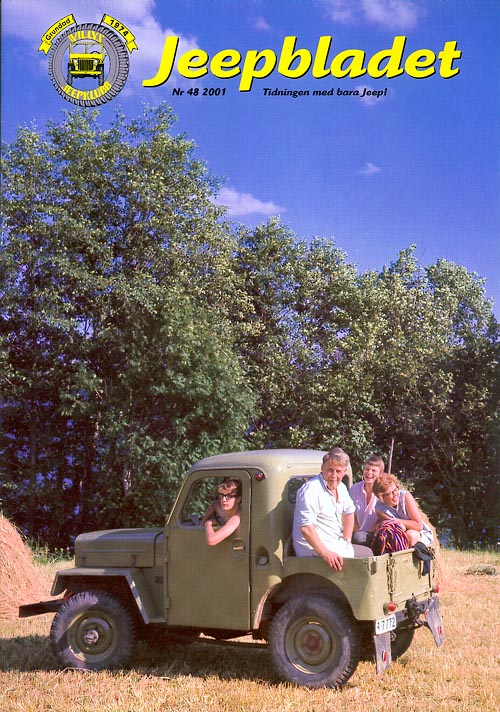 Jeepbladet, the magazine of the Willys Jeep Klubb of Sweden, is one of the most interesting publications in the world for a Willys fan, although it's entirely in Swedish. There are about 400 members in the club which was started in 1974, and it holds the archives from Scania-Vabis who imported Jeeps from the 1940's to the 60's. They have also published great full-color calendars.

There were only 317 CJ-3Bs imported into Sweden, but a few issues of Jeepbladet have featured restored examples.

Issue No. 48 (published in 2001) has an article about one of those elegant Swedish CJ-3B hardtops. This one is a 1954 halfcab with two-pane windshield, owned by Lars Hansson, whose father bought the Jeep in 1965.

The cover photo (above) and this beautiful photo of the winch in action (below) both date from the 1960s, and show the extended front fenders. The fenders have since been trimmed back to the original Willys size, and page 5 of the article (260K JPEG) includes some recent photos. 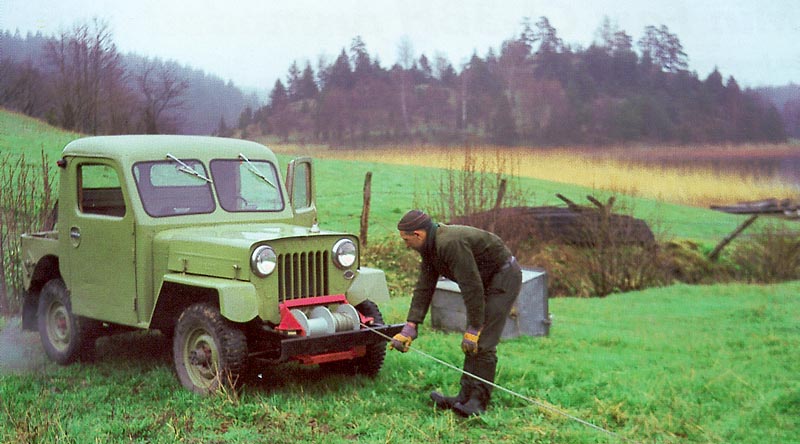 Unique CJ-3B with 5020 kilometers on the odometer (230K JPEG) is on pages 12-13 of that issue. The 1954 CJ-3B HL (long) was delivered as a fire Jeep to Svenska Flygmotor Aktiebolaget ("Swedish Aeroengine Company" or SAAB) on 31 August 1954, and restored by the second owner, Leif Lindstrom of Rackstad, Sweden.

Jeep Universal Model CJ-3B (220K JPEG) also from No. 45, is a history of the CJ-3B in Sweden. It includes photos of a CJ-3B as a forkliftat Sodertalje Central Station in 1955, and a CJ-3B stuck in the mud during a demo for the Swedish Army at the Scania-Vabis test track in Sodertalje in 1954.

Willys CJ-3B, 1954, Owner and restorer Holger Ahman, Solleron, Sweden (200K JPEG) -- from Issue No. 37 (1996): "The wooden top is made of oak by 'Onneboda sag och hyvleri' (Onneboda sawmill and planery). It's repainted in the original red color. The CJ-3B is very rare here in Sweden; only 8 are registered in Willys Jeepklubb's member register."

Thanks to Stig Edqvist for sending the issues, and Roger Bensgård for translation. -- Derek Redmond

See also The Jeep in Sweden on CJ3B.info.