Here's a Willys magazine advertisement that's a little different from most I've seen. It appeared in the August 1954 issue of Fortune magazine, and it was aimed at an industrial rather than a consumer audience. But it's clear that this ad was not aimed at the guy on the job, or the independent farmer -- this time the market was big business. The choice of Fortune, and the use of testimonials from large, respected companies, positions Willys as a major supplier. 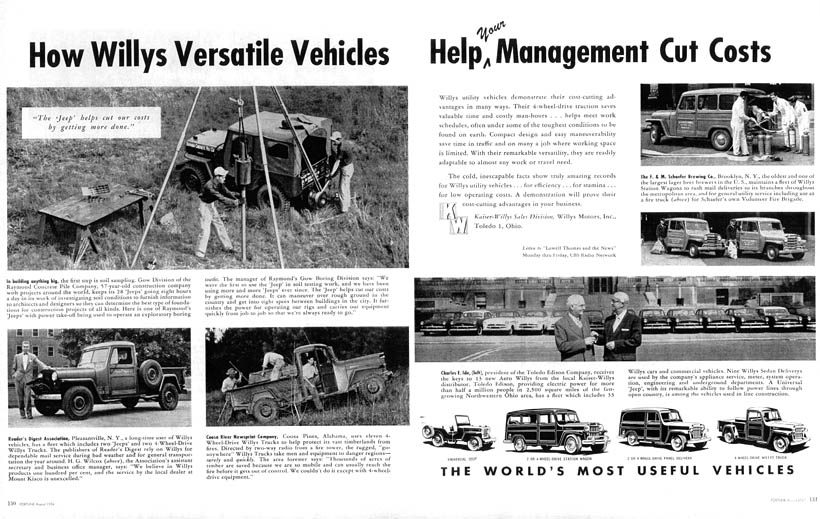 It's nice that the most prominent place in this ad is given to the CJ-3B Universal Jeep, something that didn't happen in Willys' more colorful ads in popular magazines, with their illustrations showing upscale ladies parallel parking Willys wagons. See a larger copy of the photo of a CJ-3B (60K JPEG) belonging to the Raymond Concrete Pile Company. The Jeep is powering a portable piledriver with its rear PTO. The text reads:

"In building anything big, the first step is soil sampling. Gow Division of the Raymond Concrete Pile Company, 57-year-old construction company with projects around the world, keeps its 28 'Jeeps' going eight hours a day in its work of investigating soil conditions to furnish information to architects and designers so they can determine the best type of foundations for construction projects of all kinds. Here is one of Raymond's 'Jeeps' with power take-off being used to operate an exploratory boring outfit. The manager of Raymond's Gow Boring Division says: "We were the first to use the 'Jeep' in soil testing work, and we have been using more and more 'Jeeps' ever since. The 'Jeep' helps cut our costs by getting more done. It can maneuver over rough ground in the country and get into tight spots between buildings in the city. It furnishes the power for operating our rigs and carries our equipment quickly from job to job so that we're always ready to go."

See more details on this Piledriver Jeep (and an animated version of the photo!) on CJ3B.info.

Other testimonials in the ad come from Reader's Digest, who use Willys trucks for dependable deliveries; Coosa River Newsprint, who use the trucks for forest fire protection; Schaefer Brewing who use station wagons for mail delivery (also fire fighting, 70K JPEG); and Toledo Edison with its fleet of Willys Aero automobiles. This range of real-world examples makes for interesting reading, a nice change from the kind of text usually found in Willys advertising, which at least from the perspective of 50 years later, often tends to be somewhat tired and clichéd.

Thanks to Steve Chabot for scanning the ad. -- Derek Redmond