One of the things you can rely on CJ3B.info for is the obscure stuff, right? Well, this item found by Gary Keating might be one of the most obscure. It's a trading card distributed in packages of coffee in Finland. 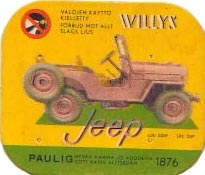 The card is from a 250-gram coffee packet sold in Finland by a company named Gustav Paulig Ltd., and 1876 is the year the firm was founded. Their packages had cards representing different makes of cars, on top of the coffee beans for kids to collect. Veli Kauppinen in Finland says they were very popular: "The children used to swap them during school hours, which did not actually please the teachers."

The card dates from the 1950s or early 60's. The Finnish explanation for the traffic sign in the top left corner is: "Use of all driving lights forbidden."

Thanks to Gary Keating for scanning the card, and Veli Kauppinen for the information on its origin. I guess this is one of the shortest pages on the website, but I thought the card deserved its own page. -- Derek Redmond

And see another coffee company using a CJ-3B in its advertising, in Respect the Bean on CJ3B.info.