Where a Man Belongs

Exploring the world... with a Camel 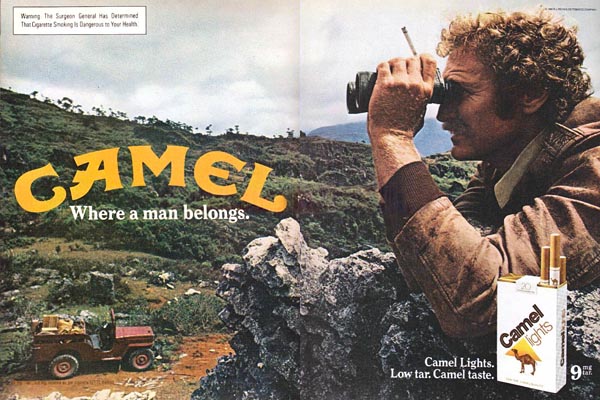 The perfect transportation for a cool guy exploring the world before his lungs give out -- a long-wheelbase CJ-3B.

Hard to know where this might be. Quite a few of the Willys 3Bs imported to Australia in 1958 were given extended frames and bodies before assembly, but the wheelbase and body don't really match on this one, so it could be homemade. Most other places where LWB high hoods were built, there would also be other details that would differentiate them from the Willys original. 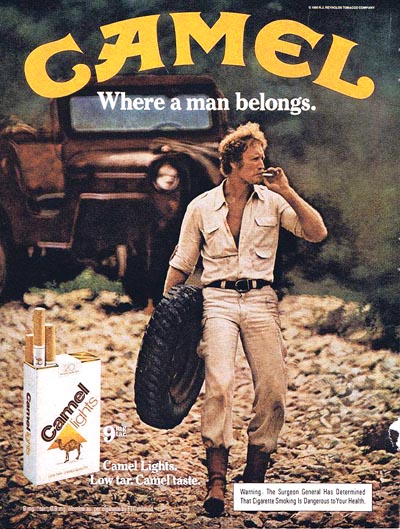 Looks like he has a flat -- where's he planning to walk to? Maybe down to the water to find the leak.

This 1980 ad campaign undoubtedly owes something to the "Marlboro Man" campaign which was so successful for the Philip Morris Company. By 1970 Marlboro became the best-selling cigarette brand in the U.S., replacing Camel which had been the top seller since before World War II.

These two ads were promoting Camel "Lights" which had arrived in a new, more modern-looking package. 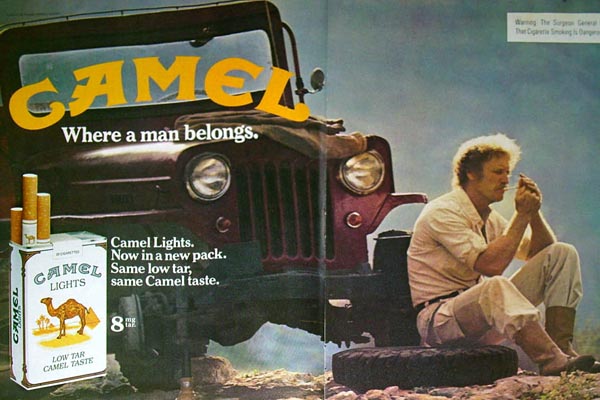 By 1981 Camel Lights had returned to the iconic Camel package designed by Fred Otto Kleesattel in 1913.

And our man had patched his tire and was taking a smoke break before putting it back on the Willys. Or maybe he had given up and was waiting for the Auto Club. 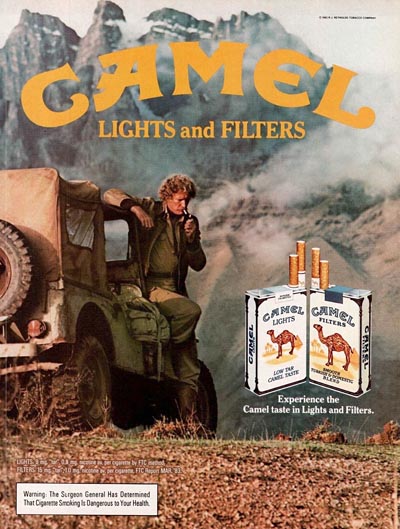 This one is from a few years later, in 1984 -- our man's hair is a little longer, and his "where a man belongs" slogan is gone. A short wheelbase Jeep this time, and it may not even be a 3B, but it looks like it could be.

There are other similar Camel ads with different Jeeps, not to mention Land Rovers, Power Wagons, airplanes, kayaks, etc. in locations around the world. But these are the only ones I have seen with CJ-3Bs. 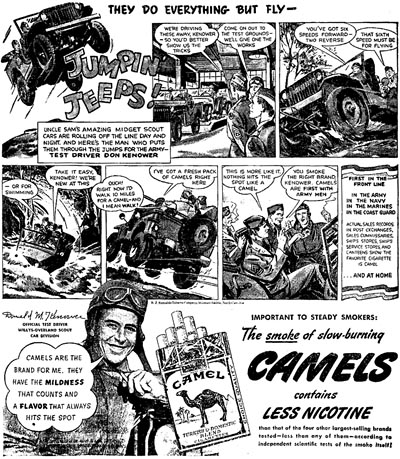 Camel's history with Willys actually goes right back to the Slat-Grille MB in 1942. This "Jumpin' Jeeps" ad features Willys-Overland Scout Car Division test driver Don Kenower, sharing some driving tips and smokes with a few GIs who are picking up jeeps from the assembly line...


Thanks to Dave Christians and Keith Minor. Please give me a heads up if you run across any more CJ-3Bs in Camel ads. -- Derek Redmond