"9000-horse Caddies with tail fins were blowing our Jeeps into the bushes. Dramatic, instant change was demanded. So Jeep, via the Instant Response Mode for which it was then famous, went into a crash schedule program -- for seven years. In 1952 the Jeep engineers unveiled their creation, the CJ-3B."

In July 1981, Granville L. King took a lighthearted look back at how the CJ-3B got its high hood, in a hilarious but insightful article for Pickup, Van & 4WD magazine.

I have excerpted some of the text below (or you can see a scan of the first two pages, 190K GIF). See page 3 at the bottom. -- Derek Redmond

Why the high hood? It was caused simply by a change in engines, nothing else. The original immortal had in it that side-valve flat-head "Go Devil!" engine. Although it only cranked out about what a Caddy wastes on air conditioning and body metal, it flat blew off the Fords and Bantams as it went through the War II proving grounds. At 60 hp it was a natural-born standout.

But in 1945, when the boys came marching home, they made certain irremediable mistakes; they built great highways and they got their states out of the mud. So things were not so close together as they had been in Dobbin's day. Everybody got rich and commuted 48 miles to work; the guys in the valley commuted to the coast and the guys on the coast commuted to the valley -- that sort of thing. And in a War II Jeep, you instantly could perceive a one mph headwind or a half-degree rise in highway grade. It seemed that impossible goals had been achieved in highway design; all of them were slightly uphill.

In the interim, 9000-horse Caddies with tail fins were blowing our Jeeps into the bushes. Dramatic, instant change was demanded. So Jeep, via the Instant Response Mode for which it was then famous, went into a crash schedule program -- for seven years. In 1952 the Jeep engineers unveiled their creation, the CJ-3B. They'd exchanged the "Go Devil!" L-head for a shiny new F-head. As a final, hopeful blessing, they called it the "Hurricane." 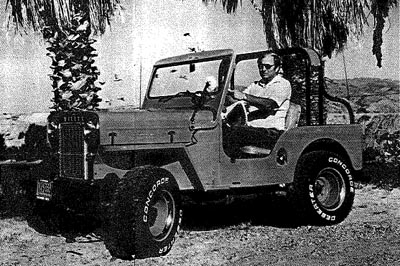 Even in the 1950s best-of-all-possible-worlds, this was perhaps not an optimum decision. Because the new F-head had precisely the same internal cubes as the old L-head, 134.2-cid. And awkwardly enough for men who worry about such things, the F-head had its intake valves in the block while its exhaust valves were in the head. Still, it had easily adjusted rocker arm assemblies on top, and via a compression increase, could zap out a pert 72 hp rather than the old 60 hp. This was Jeep's response to the horsepower revolution? It was an immediate success which we grabbed up with grateful tears in our eyes.

Still, how did this make the hood go up? Well, the F-head, with its rocker arm on top, was 4.5 inches taller than the old L-head. This put the carburetor about a 1/2-inch from the bottom of the low hood. So when you added in over-the-top carburetor linkage and a two-inch air cleaner hose, things began to poke out in the air. All of Toledo, Ohio -- Jeep's home plant -- went into deep shock; this could lead to the first sheet metal change in 11 years -- for that matter, the first significant change ever! Heaven only knows what might happen next; women might begin to vote or they might popularize this here radio stuff with pictures!

What was Jeep's decision? Of course, if a hood is too low, you simply make it unlower -- any fool knows that. So, with that ever-present torch, they took a horizontal cut under the hood and slapped in 4.5 inches of metal taken, possibly, from a General Sherman tank. A classic mistake was born!

Why a mistake? They didn't have to raise that hood! Adapters came out the same year that, along with a squattier carburetor in some cases and reversal of the carburetor linkage, dropped the F-head beautifully into the low-hood model.

And at the same time those Jeep engineers had in their very own production lines the timeless Continental Straight Six flat-head. They used it in two of their other vehicles and it had 50 percent more horses and was a near straight drop-in. Also the country fairly reeked with low-profile V-8s. Any of these would have let that hood stay where God 'n Man intended it to stay and given a significant horsepower increase at the same time.

So why not; why use a Hurricane which was more like a trade wind, with the lowest hp and cid of any American-built engine? Well, in addition to the fact that Jeep's four-bangers were in-house engines -- they'd have to go outside for anything else, including the Continental -- there was a feeling of "rightness" about it. It was that same feeling you got when Henry Ford said, "Any color so long as she's black!" These were the old days, the old ways.

Thanks to Danny Hartling for spotting this article, and to Granville L. King for a great piece of writing. -- Derek Redmond

Also on CJ3B.info, see our research into New Universal Jeep Designs, 1949-53, and Jeep Designers at Work.