Goes Anywhere, Any Time, In Any Weather! 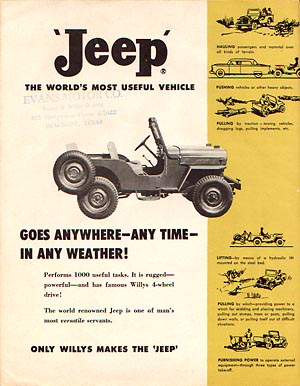 Probably the largest brochure Willys ever devoted to the CJ-3B, this was an 11x17-inch sheet folded into a four-page description of the features, benefits, applications and specifications of the Jeep, the "world's most useful vehicle." Much of the contents, however, was general material recycled from the promotion of the CJ-3A. And interestingly, the name "Universal Jeep" is never mentioned -- this publication seems ahead of its time at Kaiser-Willys, in referring simply to the "Jeep." 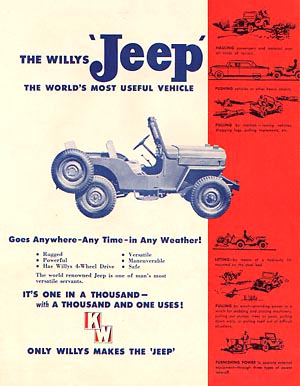 There were at least two versions of this brochure: W-201-5, the yellow version, and SD-201-4, in blue and red. Gary Keating has both in his collection, and he points out that aside from the colour, the only difference between the two is the different wording on the cover. The dates of publication are not identified, but since they apparently predate the arrival of the CJ-5 in 1955, likely dates would be 1953 and 1954. The yellow version seems to match the colour scheme of Kaiser-Willys brochure KW-1763, so it may be the 1954 version.

Mitsubishi in Japan also produced a Japanese version of the brochure (50K JPEG). 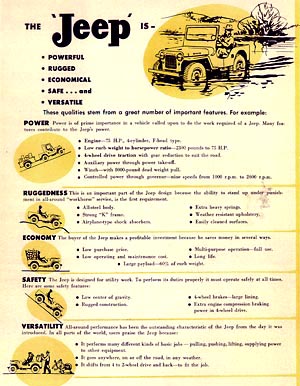 The second page features one of those Willys drawings of a Jeep up to its axles crossing a stream. This one seems to be a CJ-3A converted into a CJ-3B by erasing the top part of the grille, to allow room for the name "WILLYS" to be added. (No doubt the engineers in Toledo wished that changing the real 3A into the 3B could have been accomplished so easily.) The other little flatfender cartoons that illustrate this brochure have not been modified to look more like a 3B.

The rest of this page lists a number of features such as: 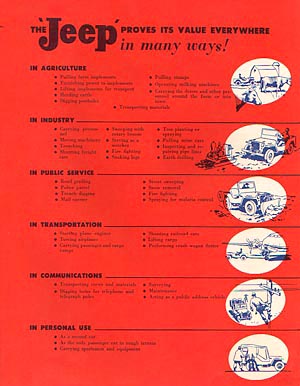 The third page is a list of jobs that a Jeep can do, presumably aimed at people like us who already own a Jeep and are trying to think of a line of work to go into. Here are a few ideas: 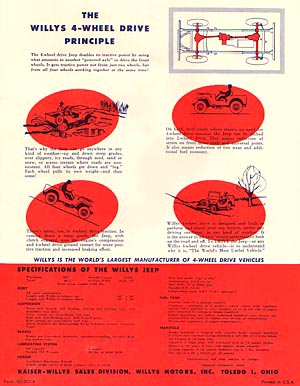 The back page is the obligatory description of "The Willys 4-Wheel Drive Principle":

"That's why the Jeep can go anywhere in any weather -- up and down steep grades, over slippery, icy roads, through mud, sand or snow, or across terrain where roads are non-existent. All four wheels get down and 'lug.' Each wheel pulls its own weight -- and then some!"

There is also a list of specs and dimensions in small print, including this description of the PCV system: "Crankcase ventilation is a positive sealed system with ventilator suction valve attached to valve chamber cover on left side of engine and connected by tubing to intake manifold."

Thanks to Gary Keating and Steve Chabot for sending the brochures. See Makoto Hirakawa's website for the rest of the Mitsubishi version of the brochure. -- Derek Redmond

Last updated 23 May 2001 by Derek Redmond redmond@cj3b.info
https://cj3b.info/Literature/BrochureW2015.html
All content not credited and previously copyright, is copyright Derek Redmond