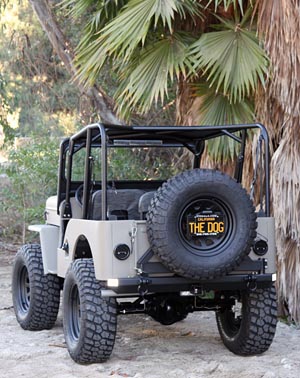 As of late October 2009, the first ICON CJ3B prototype left the plant in Van Nuys CA, where it was designed and built. This all-new CJ3B, nicknamed "The Dog" by custom 4x4 manufacturer ICON, was headed for the SEMA (Specialty Equipment Market Association) show, November 2009 in Las Vegas. (See SEMA 2009: Debut of the ICON CJ3B on CJ3B.info.)

Many web bloggers commenting on the vehicle have made enthusiatic remarks but balked at the hefty estimated price tag. However, ICON's target market is probably not the people who typically post comments on blogs. As Larry said on the CJ-3B Bulletin Board: "I'd think they could sell some, just like New Holland is starting to do with the new 'Boomer 8N' Ford tractor replica (somewhat look-alike anyway) for about the same amount of money (with a front end loader.)"

ICON won't have to sell a whole lot of CJ3B's to consider it a success. Owner Jonathan Ward and his team currently turn out only a couple of dozen hand-built vehicles per year, although the Dog will be faster to build as well as cheaper than their ICON FJ40 series (100K JPEG).

Despite hints that the first batch of Dogs would have the traditional Willys radiator guard, the prototype is complete with ICON's new grille. In these first photos, the only detail missing is ICON's lizard logo (80K JPEG). 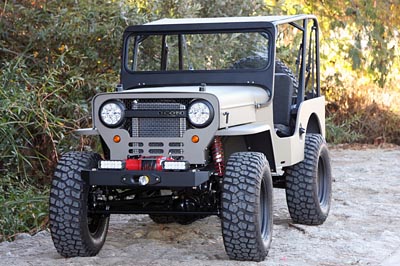 Copperswilly wrote on the CJ-3B Bulletin Board: "I like the idea of bringing out a relic and redoing it, but the front end looks too Landcruiser to me. Jeeps are supposed to have slat grilles; they have been that way from the git go and need to stay that way."

But although ICON has copyrighted the name "CJ3B," their hands are tied when it comes to the trademarked Jeep grille, so they've chosen a front end design that echoes the Landcruiser look of their FJ40.

Jonathan Ward admits, "A lot of forum guys hate the grille panel, which is understandable I guess. We did make the design so that one can choose the original or ours though."

Behind the grille is the turbocharged GM Ecotec 2.4, producing 260 HP and 240 ft.lbs. of torque. This has also been the subject of some debate around the web. One reader at Inside Line remarked, "I don't think I would have chosen that engine. Keeping a turbo in the boost while rock crawling or trail running is annoying, and out of the boost it will likely be short on torque.

"A small diesel would be perfect; maybe a call to VW for a 2.0 TDI would be in order. The 3.8 V6 from the Wrangler would be a good choice too. A lot of people whine about it but it has a wide torque curve, good power, it's compact and very durable. It's been around so long it's cheap to make too. In a light Jeep it would do great."

Ward has said ICON is considering a diesel and an all-electric version. 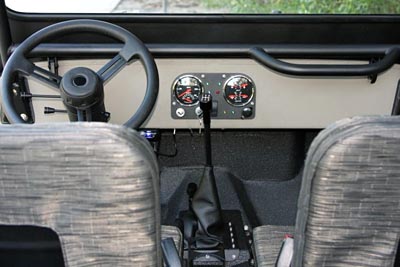 The dash features Auto Meter gauges (MPH, RPM, oil pressure, fuel, temperature and voltage.) There is also a 12-volt marine-rated power port, and three-position illuminated locking differential switch. The parking brake and submersible high beam switch are on the floor, and the Hellcat 16" steering wheel is on a custom tilt/collapsible column. 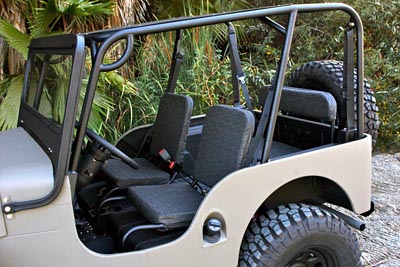 The seats are upholstered with Chilewich marine-rated UV-stable vinyl. The alloy canopy laminated with the same vinyl, and the rear-view mirror, are attached to the chrome moly steel roll cage (170K JPEG).

The prototype's body is powder coated in Mocha Tan, but ICON plans to offer other colors. Here's how I think the blue one (200K JPEG) might look. 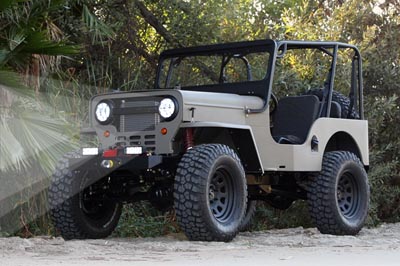 The LED headlights and off-road lights are a 21st-century touch that has grabbed attention, so I enhanced them for our cover page.

CJ-3B Bulletin Board moderator Oldtime summed up many Willys owners' ambivalent feelings about the Dog: "It is devoid of the classic nostalgia that many of us 'po folk' are seeking. And I think most folks want the experience of building their own. But it certainly appears to be a well thought out re-invention."

ICON plans to market a kit version, so I wonder how long it will be until somebody puts one together and substitutes a Willys grille?

Thanks to Jonathan Ward and ICON for the photos. See their retrospective look at the Dog as one of their Past Projects. -- Derek Redmond

Also on CJ3B.info, see the Computer Assisted Design and the Prototype Construction of the 2010 ICON "Dog", and its debut at SEMA 2009.