Yellowstone National Park in Wyoming is the world's oldest national park, created in 1872 in a region once described as "the place where hell bubbles up." Geothermal features such as the Old Faithful geyser, are evidence of one of the world's largest active volcanoes. Another fiery feature of Yellowstone is its sporadic severe wildfires. 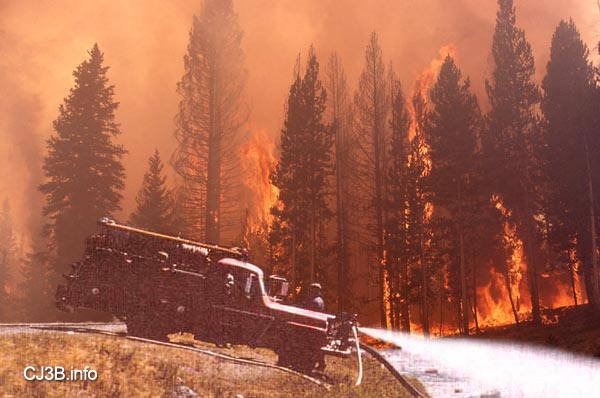 Yellowstone Park Fire Department owned five Willys fire trucks, according to its website. This composite illustration shows one of the Willys trucks, with an NPS photo of a recent fire in the background. The foreground is an NPS photo taken in the Madison River Canyon showing the vehicle and crew pumping from the river while involved in suppressing the North Fork Fire of 1988, one of the fires which destroyed over 1.2 million acres in Yellowstone that summer. 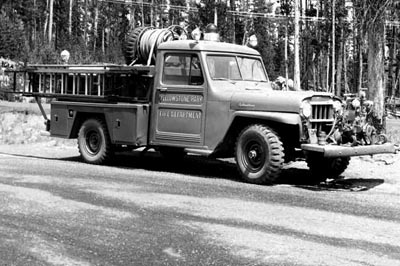 I think we now have photos of all five of the trucks. I don't recognize the apparatus manufacturer who built the body on this late-1950s Willys truck lettered for the Yellowstone Park Fire Department, or the truck above which has the chrome trim of a post-1960 Willys. 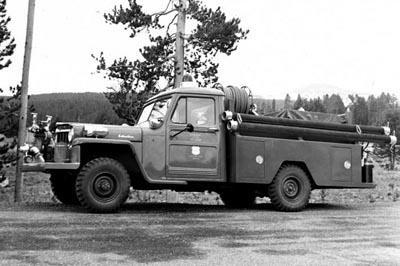 This 1950s truck lettered for the Department of the Interior, National Park Service, was almost certainly built by Valley Fire Truck. 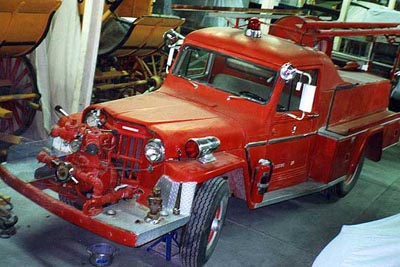 A 1960 Willys 6-226 Commando Fire Truck built by Howe has been preserved in the park's Historic Vehicles Collection (80K JPEG). It has the distinctive streamlined bodywork of Howe Willys Fire Trucks.

It has a 500 GPM Waterous Model CF-3 pump and 150 gallon tank, and the body was modified at some point to carry breathing apparatus on one side. This vehicle was last stationed at the Tower Junction area, and participated in fire suppression efforts at Grant Village during the forest fires of 1988. It was removed from service in 1996. 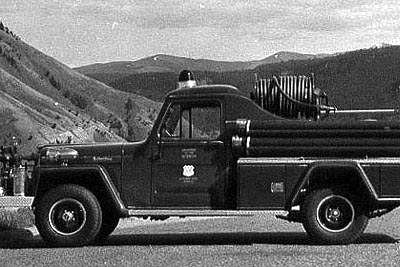 This NPS archival photo shows a pre-1960 Howe, lettered for the Department of the Interior. It is likely the 1957 Willys listed as Howe serial no. 10126 in the Howe Fire Apparatus Jeep Production List. The list also shows serial no. 10743, a 1960 truck, as being shipped to Yellowstone -- probably the truck in the collection. 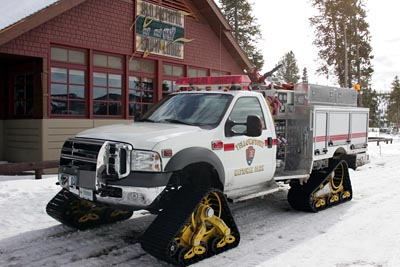 Two of the five Willys/Howe trucks were still in service as of 2004, at the south and east park entrances. According to Emergency Vehicle Technician/Fire Mechanic E. Johann Anderson, a third was being refitted as a light-duty rescue truck. One truck had its pump removed and was sent to Grant/Kohrs National Historic Park in Montana where it served as a flatbed work truck.