Well into the 2010s, the Warren Township Fire Department in Trumbull County, Ohio, had a vintage Jeep in each of its three fire stations, to respond to brush and grass fires. One of those Jeeps, a '62 3B, was sold several years ago. 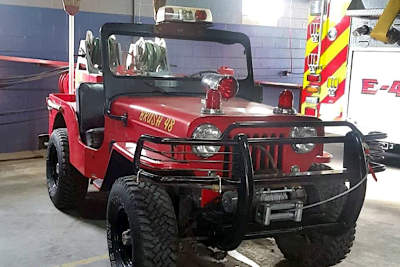 Bought by Warren Township in September 1962, this Willys CJ-3B carrying serial number 57348 91456 was built in late July 1962, and would actually be part of the 1963 model year. It has only 8,254 miles on the odometer, and has been meticulously maintained and updated over its years of service. Thanks to Warren Township Fire Chief Randy Daniels for the photos. 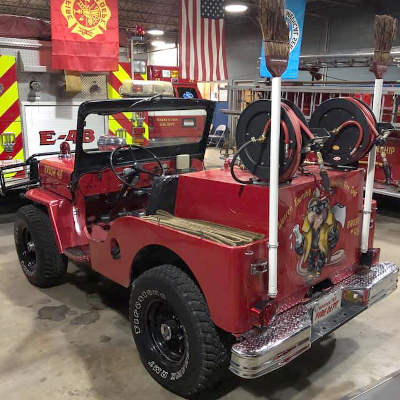 The wheels and tires have been upgraded, and some time after the above picture was taken, the garden hose reels were replaced with these more serious booster reels.

According to the March 2020 listing, the water tank holds 50 gallons, the winch and 4x4 are fully functional, and Brush 48 will be sold with lights and siren, but without the radio. 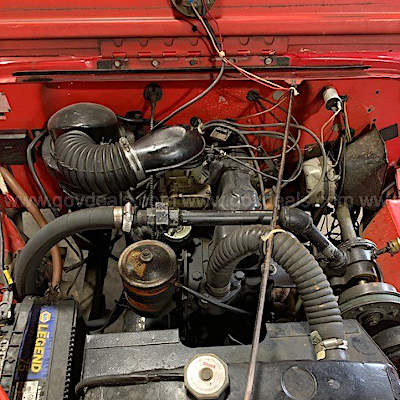 A photo of the engine compartment reveals that a belt-driven pump is located under the hood. This is one of a number of differences between Brush 48 and Brush 47 (seen further down this page) which had a portable pump powered by a two-cycle engine. Possibly they were converted and equipped differently by the crews at their respective stations, or possibly the under-hood pump on Brush 47 was later replaced.

This photo also shows the wiring to the siren at the rear of the hood. 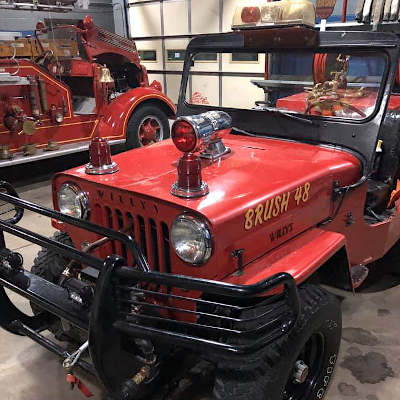 The front brush guard is also unique to Brush 48, as is the position of the red flashers at the front of the hood.

Seen in the background here is the 1942 Mack which was the volunteer department's first piece of apparatus. For a better look at it, see a 2018 apparatus lineup (450K JPEG) including Brush 48 and 49. 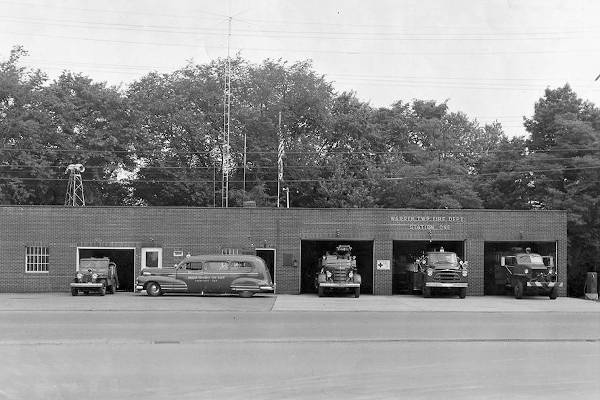 The CJ-3Bs were apparently not the Department's first Jeep purchase. This photo of Station One, circa late-1950s, shows a Willys CJ-3A in service, as well as a 1942 Buick ambulance, the Mack, a new International pumper and a military surplus tanker. (Station One was later renumbered as Trumbull County Station 47.) 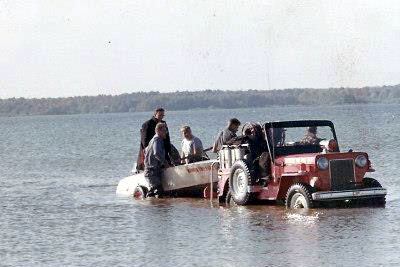 Brush 47 was the slightly different sister vehicle of Brush 48, also acquired by Warren Township in 1962. It has already been sold.

Thanks to the Department for this great action shot of Brush 47 back in the day, handling boat launching duties, possibly at Mosquito Lake, northeast of the city of Warren. 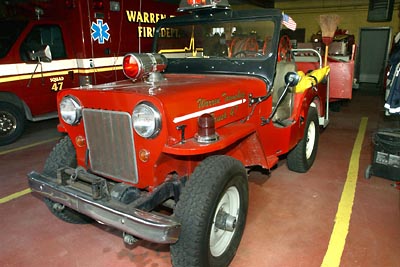 Brush 47 was still in service when these pictures were taken in 2005. Although the Jeep was in beautiful condition with 4,246 miles on the odometer, it worked hard when needed. Photographer Bob Christy said, "Note the dent to the bottom front corner of the hood. One of the firemen said they just run over anything they encounter in the woods." 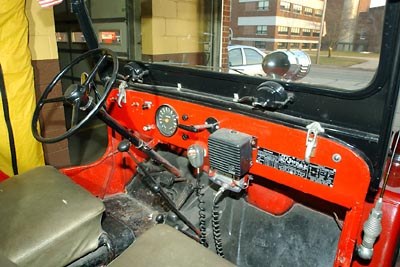 The interior view indicates that aside from the installation of the 2-way radio, the Jeep was pretty close to stock. These pictures will be of interest to anyone trying to restore early-60's-vintage seats.

Bob says, "The PTO lever can be seen at the corner of the passenger seat. The lever is bent down like a few others I've seen. The PTO is a dual output, single lever." 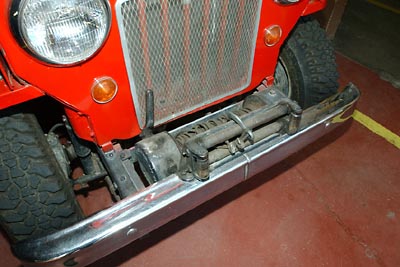 The 8,000 lb. PTO winch was nicely installed. Note the chrome bumper which was cut and welded back together.

See also a close view of the hood (60K JPEG) showing the detailing including handles replacing the original hood blocks. 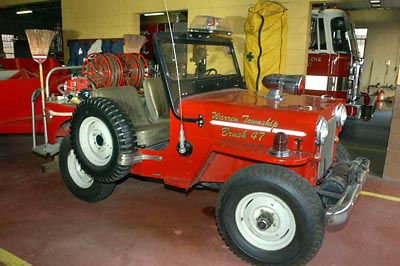 An unusual modification is the location of the spare tire, apparently moved forward to improve access to the two-cycle gas-powered pump in the rear, which supplies the two booster reels. The pump and reels ride on top of a water tank, and fire brooms and a step and handrail have also been mounted at the rear.

A similar spare tire mount on Brush 48 has since been removed. The mini light bar on top of the windshield was the latest improvement in making both Jeeps more visible, supplementing the siren and flashers. 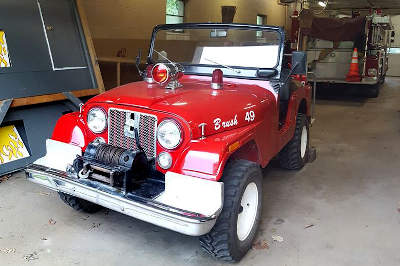 In 1968, Station 3 was built at Brookside, and a few years later the Department acquired a third Jeep, a 1973 AMC CJ-5. When the station was renumbered as Trumbull County Station 49, the Jeep became Brush 49. 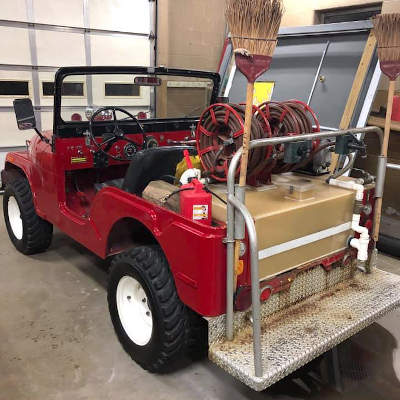 Like Brush 47, Brush 49 utilizes a portable gas-powered pump mounted on top of the 50-gallon water tank, on the passenger side. But for some reason the CJ-5 didn't get a light bar added to the top of the windshield. The odometer shows 5,160 miles.


Thanks to Bob Christy for finding and photographing Brush 47, and Randy Daniels and Warren Township for the photos of Brush 48 and 49. -- Derek Redmond