There are many fire companies with Jeeps in service for brush fire suppression, but there aren't a lot of places where you will still find Jeeps filling a regular role in fighting structural fires. The oceanside boardwalk area of Wildwood, near the southern tip of New Jersey, was one of those places until recently. These Jeeps are now retired. 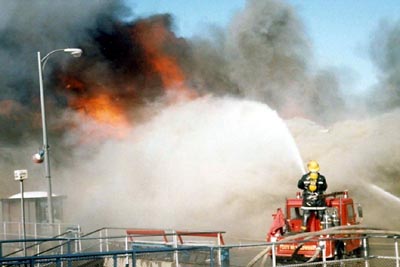 City of Wildwood Fire and Rescue is a combined career/volunteer organization which utilizes a range of modern apparatus in protecting a diverse community with 5,200 permanent residents and some 250,000 visitors every summer. Jeeps have long provided a way for the Department to get firefighters and equipment onto the narrow streets and wooden boardwalk of the picturesque beach area. In particular, deck guns capable of producing large streams are essential when fire strikes any of the bigger buildings such as oceanfront hotels which serve the tourist industry. 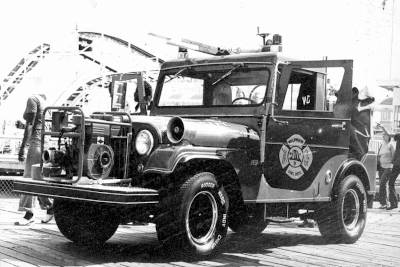 An important piece of apparatus in Wildwood for many years was a 1956 Willys CJ-5 used by the lifeguards of the Wildwood Beach Patrol until 1975, when it was converted with a 250 GPM front-mount pump (right) by the Volunteer Fire Company. It's seen above in action in 1982 at Boardwalk and Lincoln Avenue.

See also a right side photo (60K JPEG) showing the gas-powered pump under a weatherproof cover. 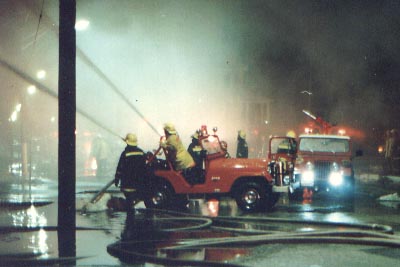 Wildwood's Willys was replaced in 1996 by CJ-8 Scrambler F-396, on the right in this photo taken at an overnight fire at the Seaville Hotel at Maple and Ocean Avenue. On the left is a CJ-5 belonging to North Wildwood Fire Department, laying two master streams onto the involved structure. 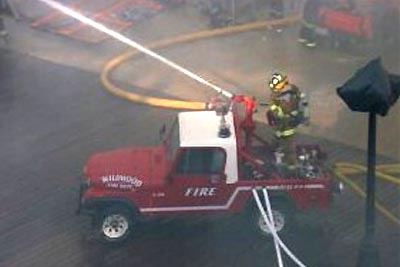 F-396 is seen here in action at Cedar and the Boardwalk. This fire had been set by two children in a four-storey sprinklered building that was shut down for the winter. Some eight fire companies took six hours to bring it under control, and two days to put it out completely. 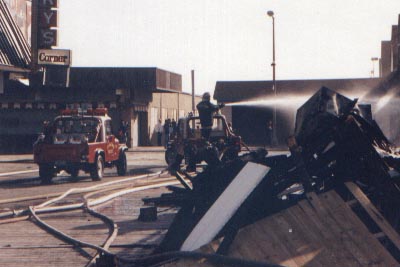 This photo was taken at the scene the next day. As F-396 hoses down the rubble, Wildwood City's second Scrambler continues to stand by. F-395 carries a large generator and four 1000-watt lights which had been used overnight. That Jeep also came to the Fire Department from the Wildwood Beach Patrol who used it as a beach rescue vehicle.

In another photo, a television news crew covers the aftermath of the blaze, with a front view of the two Jeeps (30K JPEG) making a good backdrop for the interview.

Fires such as this prompted a 2004 Federal Emergency Management Agency report which expressed concern with "the seasonality of the businesses there and the fact many of them remain closed during the off-season. This gives the local fire department only a limited window during which they can inspect and discover code violations." The report commended Wildwood for their aggressive fire code inspection program, and specifically mentioned the Jeeps: "Two vehicles, modified because of previous fires and difficulty with access, also helped in suppression efforts." 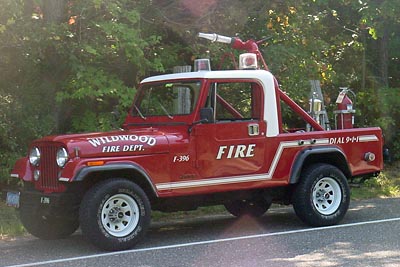 F-396 was completely refurbished by members of the Wildwood Volunteer Fire Company in 1996 to replace the retiring 1956 Willys. See a photo of its original paint scheme (100K JPEG).

See also a front view (80K JPEG) and a rear view photo (80K JPEG) which shows how it is set up to lay hose and be supplied by pumpers located at a distance from the fire. 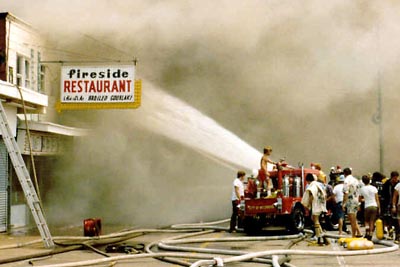 A photo of Wildwood's Willys CJ-5 at the scene of a blaze at the aptly named Fireside Restaurant is one of many shots of the WFD and NWFD in action taken over the years by Edward Snyder of capepics.com. In the larger copy of the photo (90K JPEG) it's obvious that this was a summertime fire.

Thanks to Greg Neill and Matthew Woolston of Wildwood Fire and Rescue, and Edward Snyder. -- Derek Redmond