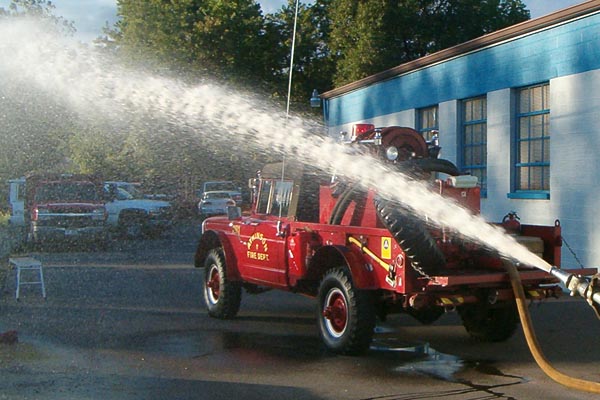 Fire truck conversions of the 1-1/4 ton Army surplus M715 were done in a number of ways (see Kaiser M715 Fire Trucks) but the quickest was to slide a skid-mounted tank and pump unit into the bed of the truck as soon as the olive drab paint had been covered with a coat of red.

Most of these 4x4 trucks riding on Dana 60 and 70 axles worked mainly as brushfire rigs using light hose and a cargo of tools such as saws, brooms and backpack tanks. But as seen here, a 250 GPM pump in the back, powered by a Briggs and Stratton gas engine, could put a pretty good stream through a 2-1/2 inch hose.

Here's a look at two examples of the Jeep five-quarter truck, retired from the fire service and sold in online auctions during 2006: 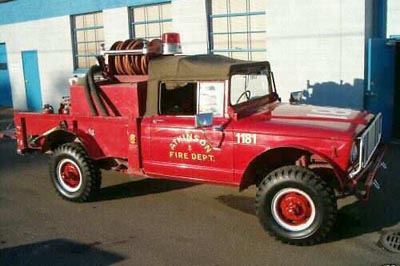 Atkinson Fire Department Unit 1181 (seen being tested above) is a 1967 Kaiser Jeep M715 with only 13,426 original miles when it was retired and sold. It was in military service at Fort Bragg, North Carolina until the early 1980's when it was assigned to Civil Defense and acquired by Atkinson NC. 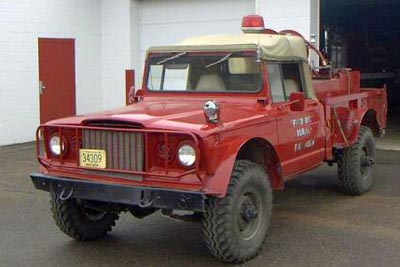 This '67 M715 with 14,557 miles was sold by the Frederic, Wisconsin Fire Department in 2006 after being retired from the Frederic Rural Fire Association.

The significant number of these trucks now being retired from their second careers, reminds us that the large government contract to build them kept Kaiser Jeep profitable in the late 1960s as the company tried to adjust its marketing to the new recreational 4x4 market, and finally sold the Jeep name to American Motors. 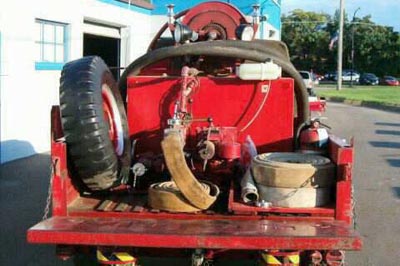 Behind the 250-gallon tank in the former Atkinson unit, there's enough space for a hose bed as well as the pump. The complete tank and pump skid unit is now for sale by the new owner, who really only wanted the heavy-duty truck itself. 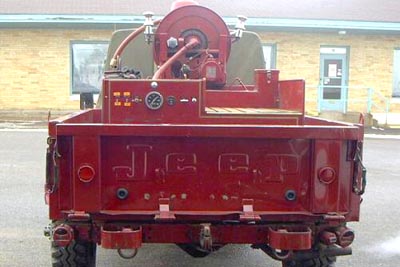 The Frederic truck has a lower and longer tank, with hose bed above and pump on the left. See the hose connections on the rear of the tank (50K JPEG). 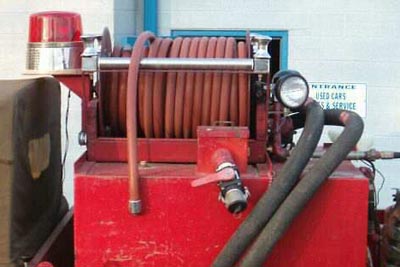 The Atkinson tank has a similar booster reel on top. The Federal Signal CJ184 4-bulb revolving light mounted right on the reel makes this package ready to instantly turn any heavy-duty pickup into a capable piece of fire apparatus. 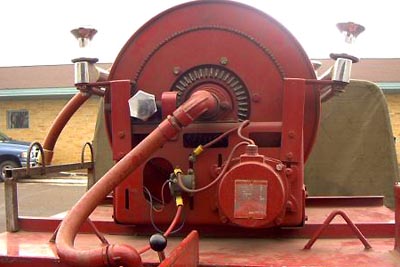 The Frederic tank and pump is also independent of the truck itself, with lifting rings between the reel at the front and the pump at the rear. The Hannay electric reel has a 1/2 h.p. motor and carries 200 feet of 1-inch rubber hose. 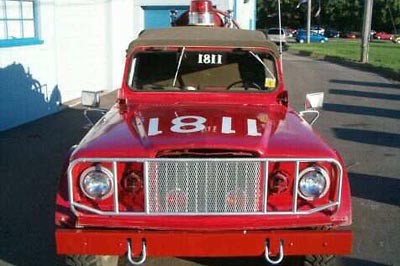 Both of these Jeeps have their original canvas tops. The original blackout lights of the Atkinson truck are still in place, inboard of the headlights. The red warning lights mounted in the grille and on the tank are 12-volt, as is the electric start for the pump, but the rest of the truck is still on the 24-volt military system.

The cab interior (120K JPEG) has been painted red and has new canvas covers (150K JPEG) on the original seats. The engine compartment (150K JPEG) has not been repainted. 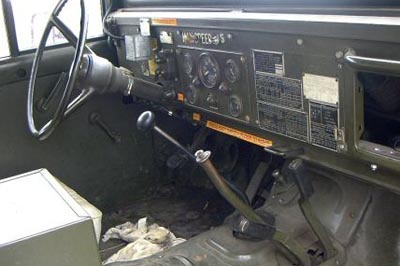 The Frederic truck might be easier to restore as a military vehicle, since it retains its original olive-drab interior (although the seats have been replaced.) The orange labels explain the sequence of military switches necessary to start the truck, including the ignition foot switch.

Thanks to the Frederic Fire Department. Also to Gary Cahill in Ohio, and Jeff, for the Atkinson photos. -- Derek Redmond