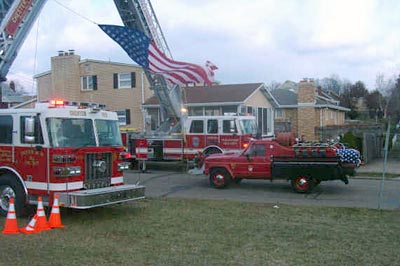 In 2007 we became aware of this 1963 Howe/Willys J-200 Jeep Gladiator fire truck when it was purchased by John B. (Jack) Stankiewicz of Weirton, West Virginia. It was obviously a rare and perhaps unique fire truck, and Jack put a great deal of time and money into getting it roadworthy. He was hoping to have it repainted in 2008, but unfortunately Jack became ill and passed away at the age of 70 on 2 December 2008. The Jeep was called in to duty once again to take Jack to his final resting place on 7 December. It was the largest firefighter funeral in the city of Weirton's history.

In this photo, trucks from Follansbee and Chester WV hoist the flag above the funeral procession in a cold wind. 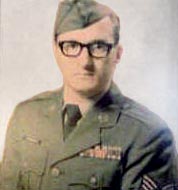 Born on 23 February 1938 in Wheeling WV, Jack attended Oklahoma State University and served in the United States Air Force in Japan and in Vietnam where he received the Air Force Commendation Medal. He served as Hancock County Deputy Director of the Office of Emergency Management and held a life membership in the Weirton Heights Volunteer Fire Department where he was Honorary Life Chief. 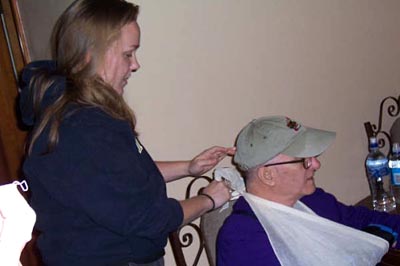 Jack was a founding member of NOVASAR (Northern Ohio Valley Area Search And Rescue) among other emergency services organizations in Ohio and West Virginia. He and his K-9 companion Rudy were active in search and rescue, and as can be seen in this photo where he plays the role of victim, he was also active in training. His family has suggested that contributions in Jack's memory could be made to NOVASAR. 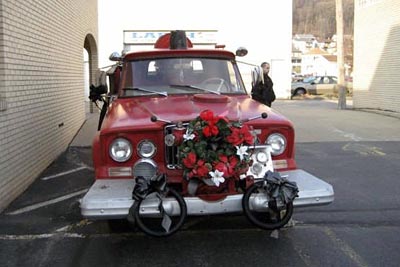 The J200 is dressed for its last call, with a Christmas wreath on the Waterous pump and funeral wreaths on the tow hooks, in this photo taken outside the funeral home. 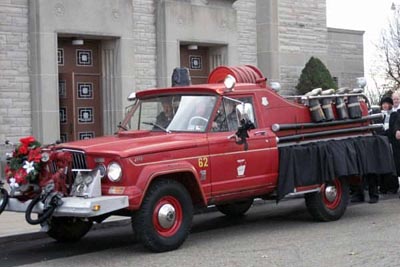 Funeral services were held at Saint Joseph the Worker Church in Weirton. 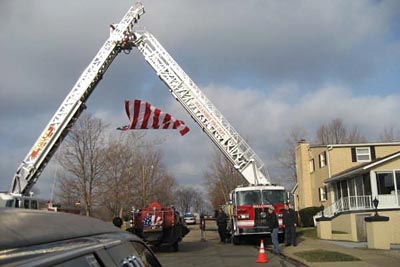 This letter from Sharon Davis Green in the Weirton Daily Times described the funeral:

"As I watched from my window this morning, homebound with a nasty cold, Jack's funeral procession made its way slowly towards his final resting place. His casket, draped in an American flag, was carried on the back of a fire truck and dozens of search and rescue and fire personnel, dogs and vehicles followed along with many family members and friends. It was magnificent.I could just imagine Jack's delighted grin as he watched from his new office in heaven as surely God has put him in charge of the search and rescue of lost souls. He's just the man for the job." 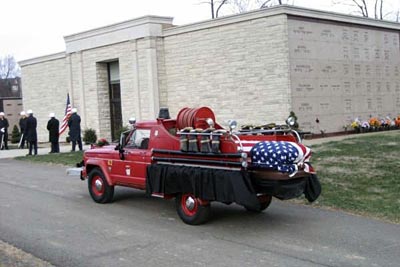 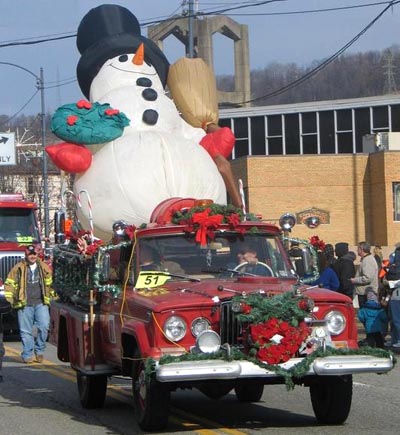 Jack's brother Joe Stankiewicz is seen driving in this 2008 Christmas parade photo. The Jeep was escorted in the parade by the Western Pennsylvania Firefighters Honor Guard Scottish Band. Joe says, "Jack was sick at the time but did get to watch the parade from his hospital bed. His grin was from ear to ear."

Joe subsequently rebuilt the pump, which was demonstrated at a muster held in Jack's honor in Wheeling, WV in August 2009.

See more photos of the Howe Gladiator Fire Truck on CJ3B.info, including the pump in action at that 2009 muster.


Thanks to Joe Stankiewicz for the photos. -- Derek Redmond