It's surprising that the 101-inch wheelbase CJ-6 wasn't more popular as a fire truck, with a rear storage capacity greater than the short-wheelbase Jeeps which were commonly used as a platform by manufacturers such as Howe Fire Apparatus. 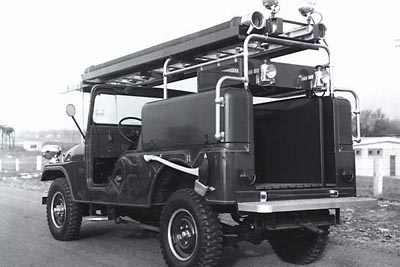 This picture found by Steve Hagy is the a rare factory photo of a CJ-6 converted by Howe, who built hundreds of Jeep fire engines from the 1940's through the 1960s.

Unlike the other CJ-6 conversions seen here, this unit follows the same basic configuration as the earlier Howe flatfender Jeeps, and probably has a front-mounted pump. See also a 1960 Howe CJ-6 on Fire Island NY. 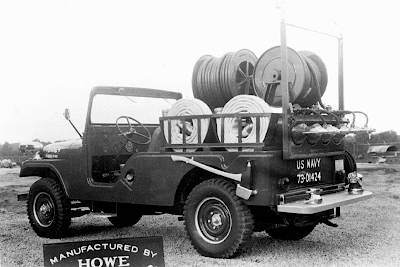 Another Howe photo shows a CJ-6 built for the U.S. Navy in a very different configuration, with a full load of carbon dioxide cylinders. Presumably this was an airfield crash truck, but possibly it also had a front-mount pump, which would explain the rolls of large-diameter hose. 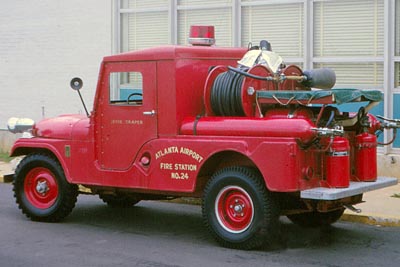 This CO2 unit at the Atlanta Airport also packed a lot of cylinders and booster hose into the longer body of the CJ-6. Like the Howe unit above, it looks like it also carried water and a front pump. 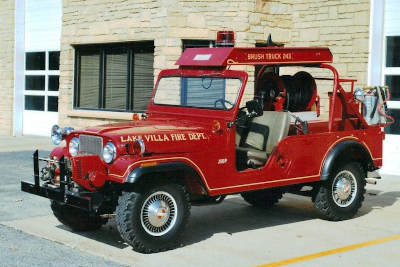 This 1963 CJ-6 belonged to the Lake Villa Fire Protection District in Illinois, which was incorporated in 1936, and as of 2021 staffs four full-time fire stations. The 6 had an overhead compartment that resembled the Howe ladder racks, but held fire brooms. Lake Villa also had a matching CJ-7 (170K JPEG). 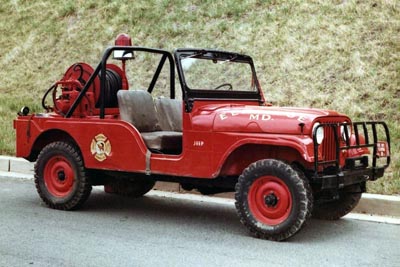 A 1964 CJ-6 used as a brush truck by the Elkridge Vol. F.D. in Maryland made use of the space in the back to carry water and a large booster reel, while maintaining a low profile for stability. Photo by Johnny Floyd II of Royal Blue Ltd. in Laurel MD. 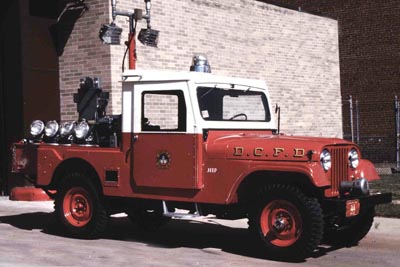 This Washington DC floodlight unit is a 1966 Jeep with extra stowage space added. The photo taken by Charles Marcus in 1983 is from the collection of the late Richard M. Adelman. 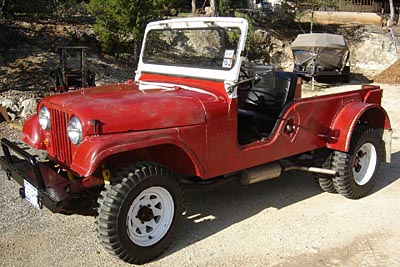 CJ3B.info has found the true story behind this 1964 dual-rear-wheels CJ-6, described in a 2006 online auction as a factory-built DRW. It was indeed registered originally in 1964 to the Beaumont Fire Department, home of the Fire Museum of Texas, but it was actually converted into a dually by the BFD.

Lt. Rhett Snyder (Ret.) writes, "That Jeep along with another just like it was built in 1964 by my grandfather, Owen C. (OC) Johnson, Chief Mechanic and Fleet Supervisor for the BFD. Over his many years there, OC built quite a few interesting things, some of which are now in the museum in Beaumont. Pete Shelton (Chief) and OC put together the fire museum; one of their crowning achievements." 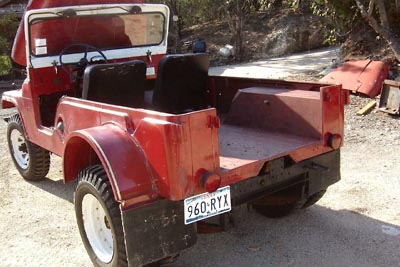 Rhett also says, "The four-wheel drive on this Jeep is in fact not functional, and the front driveshaft was left out because of the gearing differences between the front and rear wheels due to the conversion. As of today, I just found this Jeep and purchased it to bring it back into the family. Now I am trying to find the winch, pump, and all of the parts that were removed from it sometime around the time of the sale." 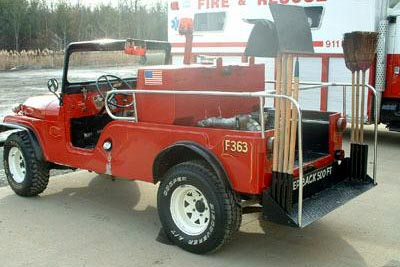 This 1959 Willys CJ-6, serial no. 57748-16903, was purchased on 23 July 1959 as a brush fire trunk for the Palmyra Township Fire Dept. in Ohio.It was offered in an online auction in 2005 with 5050 miles on the odometer. Features include helper springs, heavy-duty clutch, master battery disconnect switch, and front-mounted Ramsey winch. The fiberglass-wrapped steel tank supplies a 5 HP Briggs and Stratton-powered pump. 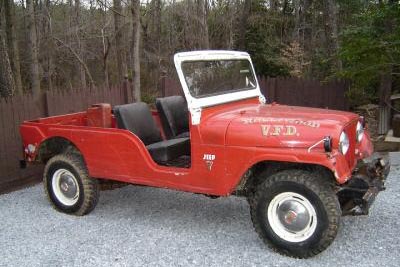 This 1964 Jeep belonged to the Hollywood, Maryland Volunteer Fire Dept. The Jeep no longer carries any equipment, although a power take off drives a Ramsey front winch. The engine was replaced in 1990, but the rare original hubcaps are a nice feature. 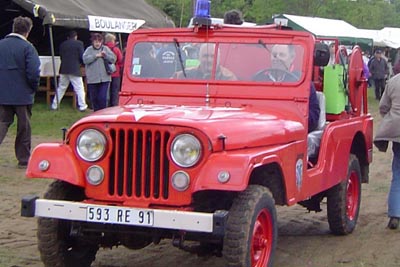 Unfortunately we don't have any information on this CJ-6 photographed by Jacques Dujardin at a car show in France in May 2006. It appears to make good use of the large rear bed of the 101-inch wheelbase Jeep. See also a CJ-6 of the Paris Fire Brigade in Hotchkiss CJ-3B "Light Tank Trucks". 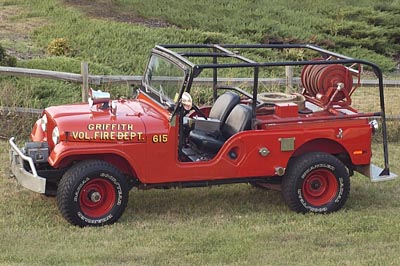 This 1968 Kaiser CJ-6, serial no. 8405-01750026, was delivered new to the Griffith Volunteer Fire Department in Winston Salem, North Carolina, where it served until 1998. This unit has a 120-gallon tank, with plumbing built into the body. The Dauntless 225 V6 runs through a T14 transmission, DANA 18 transfer case and Warn Overdrive, with rear PTO, dual exhaust, 31x10.5x15 A/T radials on 8" wheels and an 8000 lb. electric winch on the front. Not surprisingly, owner Worth Sparks doesn't mind taking it out on the trail (80K JPEG). Thanks to Worth and photographer Andy Sagcac. 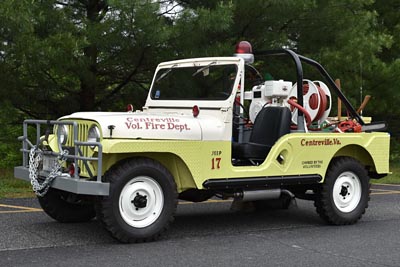 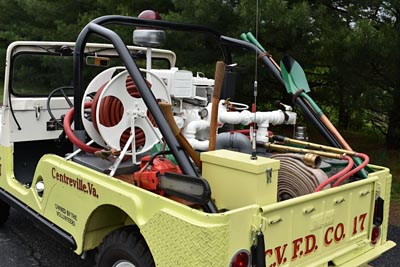 Thanks to the Old Dominion Historical Fire Society and photographer Mike Sanders. 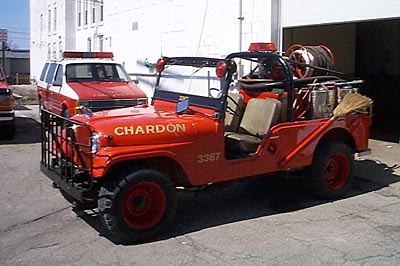 Chardon, Ohio is in the heart of the "snow belt" south of Lake Erie, but Truck 3367 of the Chardon Volunteer Fire Department sees most of its action in summer, not winter. This heavily-armed grassfire truck is a recently-refurbished 1964 CJ-6.

Chief Engineer Mike Homovec has done some impressive plumbing on this unit. It has a 150-gallon tank, 132 GPM draft-capable pump, 150 feet of 1" forestry hose, and lateral spray nozzles to "spray on the fly". There are sprinkler heads at front, rear and sides, so it can spray the ground around the Jeep while moving.