CJ-3A Universal Jeeps were turned into "factory" Jeep Fire Engines by both Boyer Fire Apparatus and Howe Fire Apparatus, although they are harder to find than CJ-2As or even CJ-3Bs. In Europe there were some interesting CJ-3A fire trucks built by Kronenburg in the Netherlands.

But there have also been some interesting conversions done by individual fire departments. Here are a couple of those unique CJ-3A conversions. 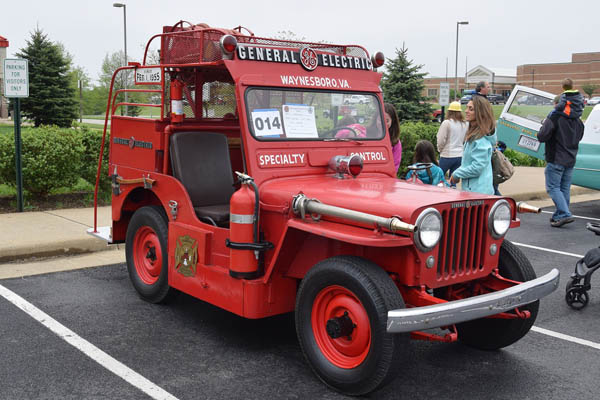 Here is a unique Jeep pumper which has been seen at various fire apparatus musters since it was donated in 2002 to the Old Dominion Historical Fire Society (ODHFS) in Virginia. It's a 1951 CJ-3A which was bought as a stock vehicle by General Electric in 1953, for its new Specialty Control plant in Waynesboro VA.

It's seen here in April 2016 in Winchester VA, prior to the annual Apple Blossom Firefighters' Parade. Photo by Jack Sullivan for ODHFS. 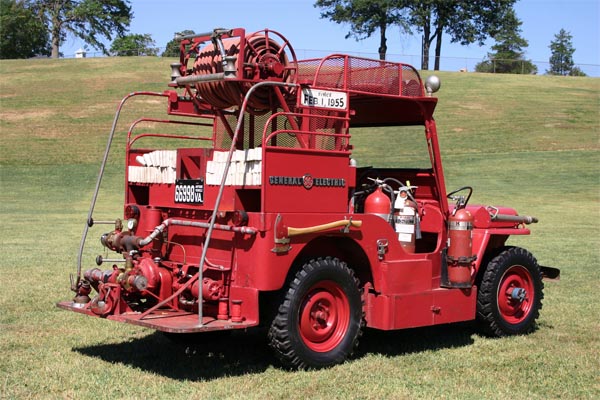 The General Electric shops converted the stock 3A into a high-pressure mini-pumper, which went into service in February 1955. The 250 GPM pump was rear mounted, and in addition to a 50-gallon water tank there was lots of room for equipment storage. The Jeep was not required to carry ladders or suction hose, and apparently was not expected to do much off-pavement driving, allowing some low-slung storage lockers. This 2010 photo is by Mike Sanders. 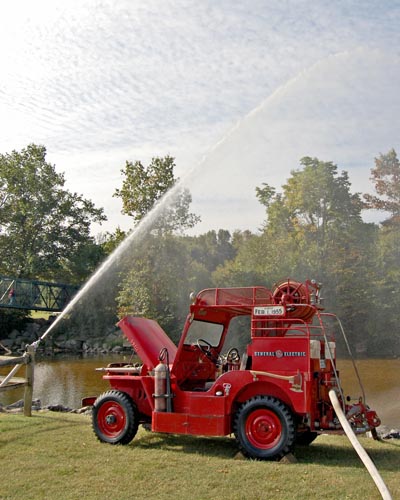 The ODHFS is the Virginia Chapter of the Society for the Preservation & Appreciation of Antique Motor Fire Apparatus in America (SPAAMFAA). Their 2010 Statewide Muster was held at Ridgeview Park in Waynesboro, where Jack Sullivan took this great photo of the Jeep drafting from the South River. 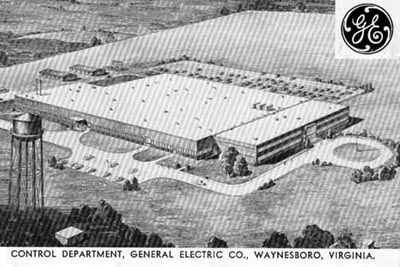 The former Waynesboro airport had been acquired by General Electric in 1953, for a new plant which was part of the Corporation's effort to decentralize from the northeast to other parts of the US. Construction began immediately, and it produced a building boom in the rest of Waynesboro, to accommodate workers and their families. (Wikipedia)

The Specialty Control Plant produced relays, control systems and other products for aerospace, military, industrial and computer applications. This postcard is courtesy of USGen Web Archives. 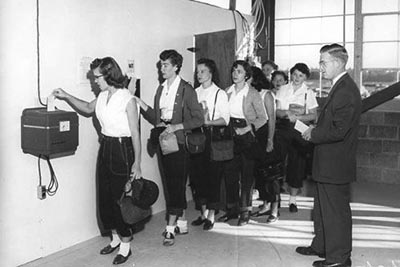 By the summer of 1954 production of photoelectric devices was begun with the hiring of a few women from the local area, and by the end of that year there were 400 employees. Employment peaked at 3200 during the late 1970s, but some departments were transferred to other plants, and GE sold the facility to Genicom Corporation in 1983. The property now leases space to smaller businesses. The building was added to the National Register of Historic Places in 2012. 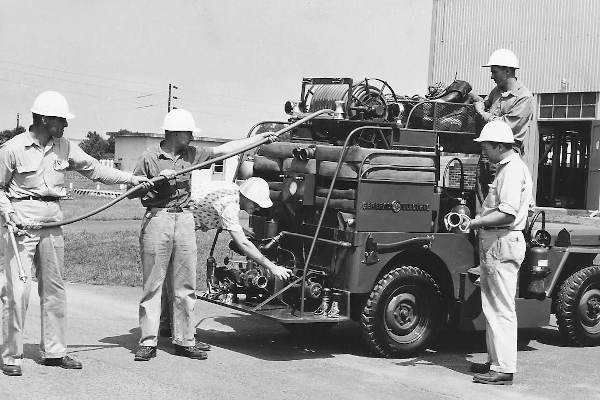 GE employees pose with the new Jeep and its high-pressure booster hose in this archival photo. It shows features no longer present on the restoration, including an upper level hose bed with 4-inch hose, and rear-facing red warning lights. See also a front view (300K JPEG) showing where those hard hats were stowed. Thanks to Bob Simmons for the photos. 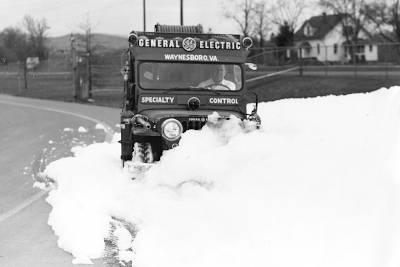 Bob also provided this shot of foam training. Foam generation and multiple CO2 extinguishers were both important capabilities in the industrial environment. The foam was generated by a foam nozzle with a pick-up tube using five-gallon cans of foam. 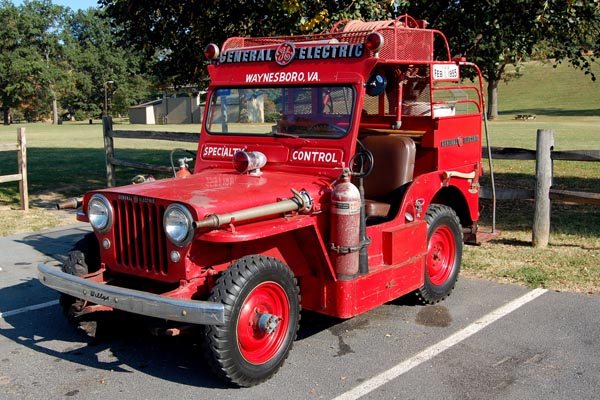 Luckily this unique piece of apparatus was saved when the GE plant closed. The ODHFS brought the Specialty Control Fire Jeep back to Waynesboro for their 2010 Statewide Muster, and in this photo by Jack Sullivan the "Willys" stamping in the front bumper is clearly visible. The GE shop used the chrome rear bumper from a Willys station wagon as a nice finishing touch for their Jeep. 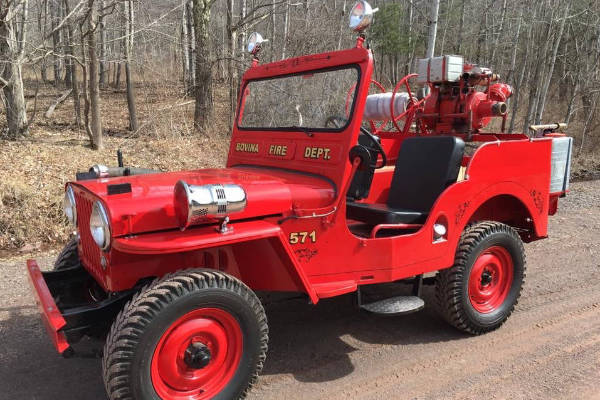 The Bovina Center Fire District was organized in 1949 in Delaware County, New York, and a few years later the BCFD purchased this 1951 Willys CJ-3A. They set it up to get a removable portable pump to a river or pond where it could supply water to a tanker or a fire scene in the Catskill Mountains around Bovina Center. 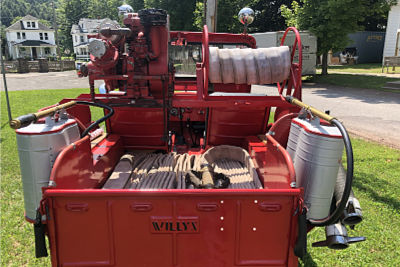 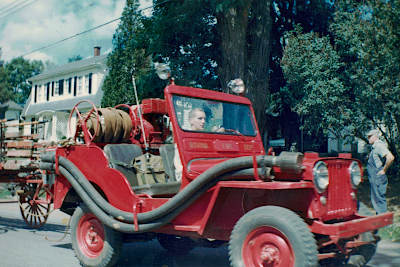 In 2021 Chief Brown found this photo showing the 3A in a parade in 1964. Suction hose is carried on the passenger side. 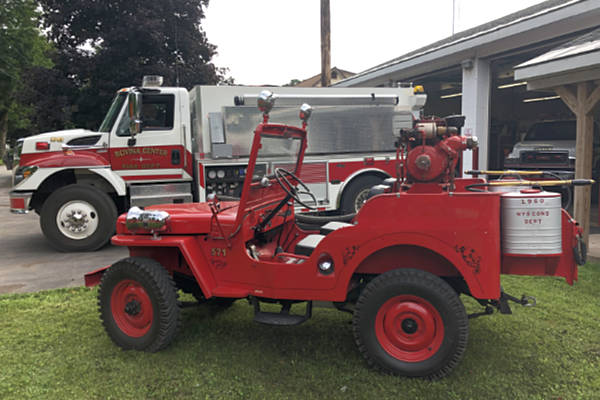 Jeep 571 served until the mid 1990s, when it was taken out of service and stored on a local farm. Around 2014 it was given a full frame-off overhaul and brought back as a parade vehicle, and it's pictured here with the Department's 2010 International/Alexis.

Note: Chief Brown says he is trying to locate the axe holder that would have been on the driver's side. 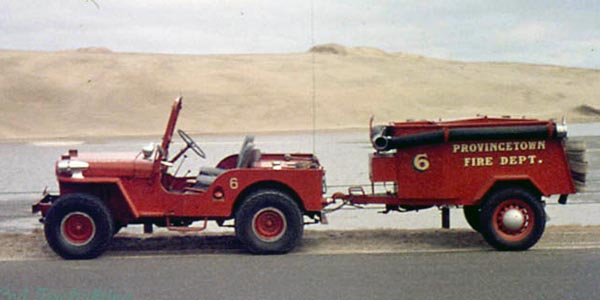 Provincetown, Mass. Engine No.6, circa 1950. This CJ-3A with a pump trailer was in service into the 1970's. Jim Fairweather found the excellent page of Provincetown FD history at CapeCodFD.com, which says the trailer may have been built by Maxim during WWII, and was probably 500 gpm. 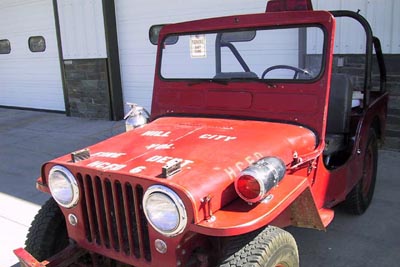 Rus Curtis spotted this CJ-3A still in service with Hill City Fire Department in South Dakota. Rus notes: "The HCFD said they've owned it since 1951. They used to use it for brush fires but use it now to run errands." See a rear view photo (80K JPEG) which shows the Jeep serving as a hose wagon. 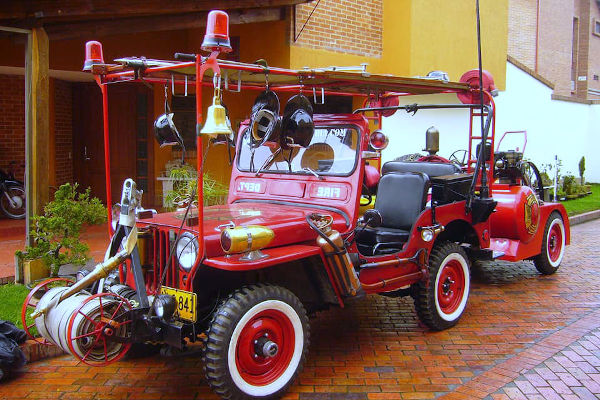 Carlos Edwin Cepeda Cardozo in Colombia built this parade Jeep. He's in Chia, just outside Bogota, and spent three years on the project, including the trailer. The body suggests a CJ-3A or M38, but Carlos says that underneath it's a 1946 CJ-2A. 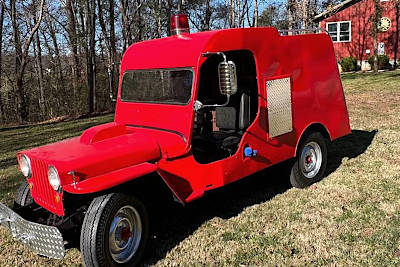 I would really like to discover the origins of this CJ-3A with a deluxe fire engine body. It has been through a few variations, including being painted as an ambulance (see Willys Ambulances on CJ3B.info.) It was modified at some point with an F-head engine. See also the cab interior (190K JPEG). 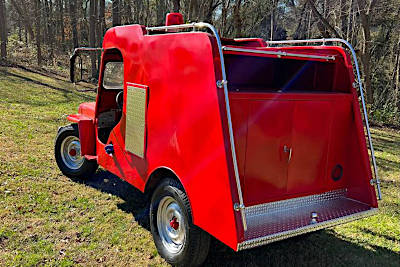 The bodywork certainly appears to be something beyond what most fire departments would be able to do, but as far as I know it is unique. I don't know if it ever had a pump or a water tank. As of 2022 it has been painted in red once again, and offered for sale on Facebook.


Thanks to Jack Sullivan and James Fairweather. -- Derek Redmond