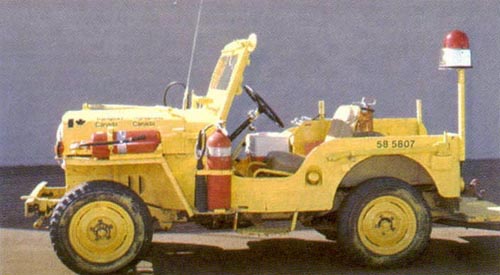 This 1959 CJ-3B (S.N. 5734851142) was perhaps unique in Transport Canada's fleet of vehicles when it was retired from the fire department at the airport in Calgary, Alberta. It had long been the airport's first response unit for emergencies in the parking garage because of its small size.

The Jeep had a large rear step added, and carried CO2 and dry chemical extinguishers, fire axe, and first aid and other equipment. In this photo it appears to have been given a pretty quick repaint. 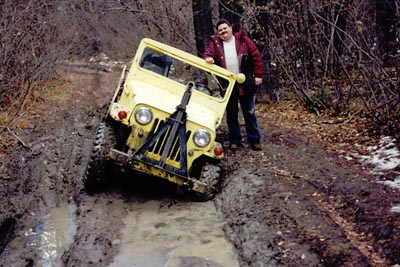 The Jeep was sold to a dealer in Calgary, and subsequently to Mike Lemmer, with all the fire equipment and toolboxes removed. Mike found it to really be in very original condition under the yellow paint, with only 8900 miles on the clock. He says it purred like a kitten, and he had some fun with it, and then decided to restore it and paint it red. 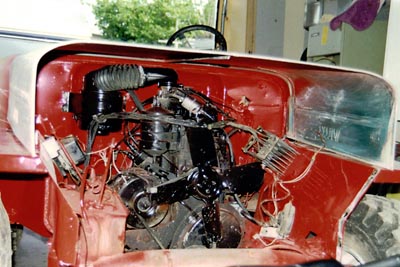 The Jeep was equipped with a heavy-duty generator and rectifier (mounted on the left fender) to run the radio and lights. After painting the engine compartment (60K JPEG) Mike snapped this photo from an unusual angle with the grille removed. 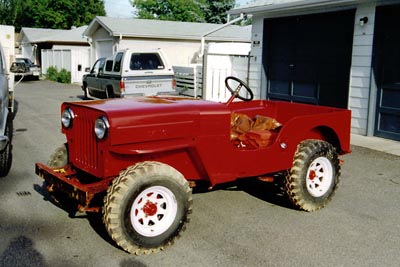 Mike replaced the steering wheel and tried some different wheels and tires. Since the Jeep had only a driver's seat, he also decided to put in a new pair of seats. Other than that it was pretty much stock. 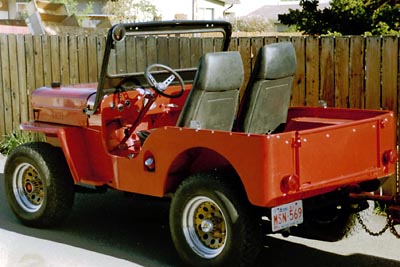 A tailgate was built from scratch to replace the long-lost original. Mike says, "It was built out of a couple pieces of pipe, some square tubing pieces, a piece of flat panel -- I think it was 1/8" -- and a couple of small pieces of solid rod for the hinges. I thought it didn't turn out too bad."

Thanks to Mike Lemmer for taking the photos. He subsequently sold the Jeep to a new owner who took it to the west coast, and as of 2006 it belongs to Jim McCormick and is back in Calgary (see 1959 Owners' Photos). -- Derek Redmond