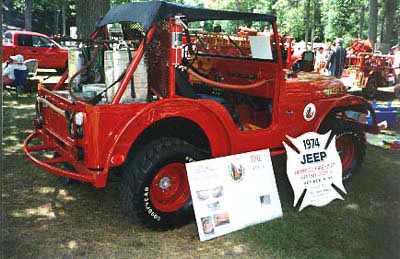 This brushfire Jeep, formerly in service with Henrico (Virginia) Fire Company Station 4, was retired in 1998. Four Jeeps were purchased in 1974; as of 2001, two are still in service (repainted in yellow/green) at Stations 11 and 14. This Jeep is now owned and displayed by the Jones family, who live in Henrico County.

The photos were taken by Tom Edwards at a national fire truck convention in Liverpool NY in August 1999. Owner Bill Jones mentions that the Jeep has won numerous awards at shows, including the Millville Muster's prestigious Richard Gardner Memorial Award two years running. 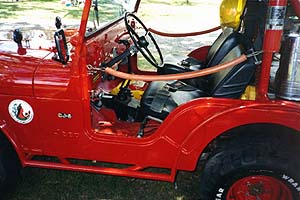 The pipe frame around the body was installed to protect the body from heavy brush. Brush Jeep 4 accumulated 18,000 miles in its 24 years of service. 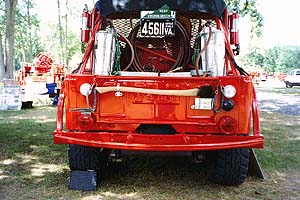 As well as a load of backpack tanks, extinguishers and other equipment, the Jeep carries a low-profile water tank which fills the rear cargo area. The relatively small size of the tank keeps the Jeep agile in the bush. 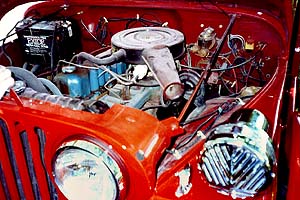 The stock inline six-cylinder engine runs a belt-powered pump when required. The full-size siren warned people well ahead on the winding roads in the Virginia hills. 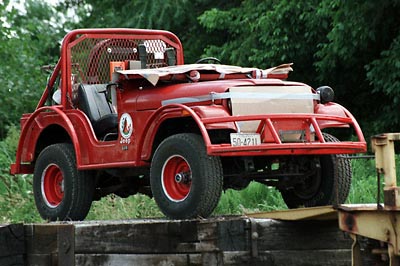 The Jeep's last in-service call was a big one: it travelled by train to Florida to help fight wildfires there in the summer of 1998. Joe Mahoney caught this photo of the Jeep prepped for the trip and ready to roll. Brush Jeep 4 was retired shortly after returning to Virgina, and Joe comments, "Nowadays, it can be seen leading many local parades in and around the Richmond, VA area."

Thanks to Tom Edwards for the display photos, Joe Mahoney for the train photo, and Bill Jones for further information on his Jeep. -- Derek Redmond