Bill Prince recently posted some of his photograph collection on the M38 and M38A1 group on Facebook, with pictures of various stock Willys vehicles and winches, body extensions and other equipment made by Koenig Iron Works in the 1950s. Christián Podlesker thought the photos should be archived where they could be referenced online, and he contacted Bill to get the background on the photos. Here's the story and a selection of the photos. -- Derek Redmond 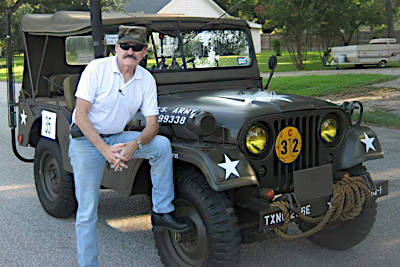 After several years at ILC Space Systems, where he worked designing the thermal blankets for the Space Shuttle solid rocket boosters, and the ground support equipment covers for the SRBs, Bill Prince joined Rawson-Koenig (formerly Koenig Iron Works) in Houston, as Design Mechanical Engineer. He worked there for a little over a year from 1993-94, followed by some contract engineering work, and finally fifteen years as Safety Engineer for the Space Shuttle main engines. 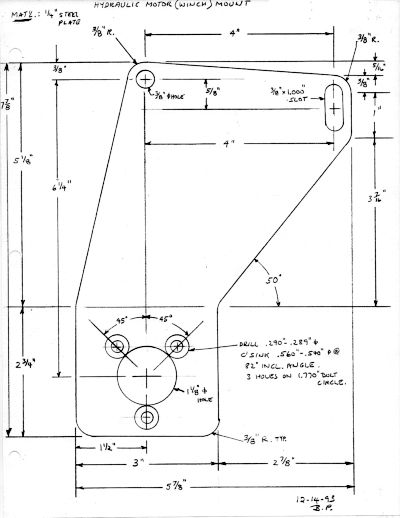 Here are a couple of Bill's original sketches from Rawson-Koenig.

Koenig Iron Works had been bought out by a truck tool box manufacturer in Fort Worth by the name of Rawson, becoming Rawson-Koenig.  The Rawson family was and still is the owner. Richard Koenig, grandson of the founder of Koenig Iron Works, was still working there when Bill joined the company, and Bill regrets not having had the time to ask Richard about the history of the company and products, as he grew up in the business and was the one who knew about the past. 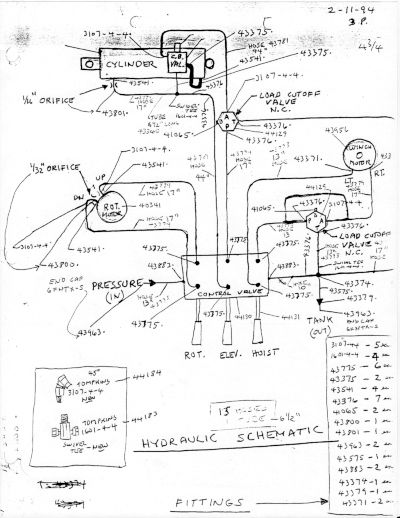 Rawson-Koenig produced service bodies, cranes, winches and tool boxes.  During his time there as Design Mechanical Engineer, Bill was involved in designing, testing, and making changes and improvements to cranes. See for example this schematic for hydraulics. He also wrote a Table of Operations for assembling the winches, whose design was the same as it had been for decades.  Bill remembers that there was one technician, who had been there for a long time, who was the expert at assembling the winches.


Bill says that he acquired a hundred or so of these photographs, which were 30 to 40 years old at the time, from a 55-gallon drum full of old photos.  On one particular weekend, he helped with cleaning out the Engineering offices, and the company owner had decided what would be discarded; hence the barrel full of photographs.  Bill did not have much time to pick through the photos, and not much room to store them, but he managed to save a small number of them before the rest went out with the trash. 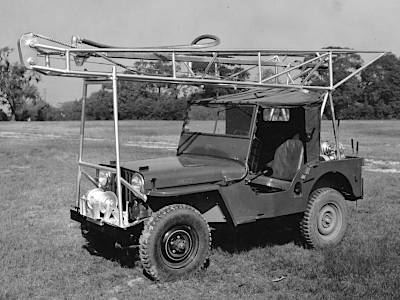 Most of the photos appear to date from the mid-1950s. This is perhaps the earliest one, shot by Litterst Commercial Photographers in November 1946. Somebody's CJ-2A has been custom fitted with multiple winches and some kind of drilling rig. 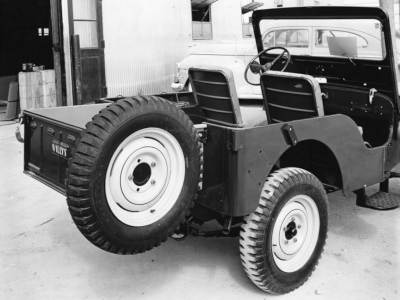 Long-wheelbase Universal Jeeps would not be available until the debut of the CJ-6 in 1955, so for a few years Koenig sold a lot of body extensions. This demo installation on a brand new CJ-3A included moving the spare wheel bracket (but not the vibration dampener) to the extension. 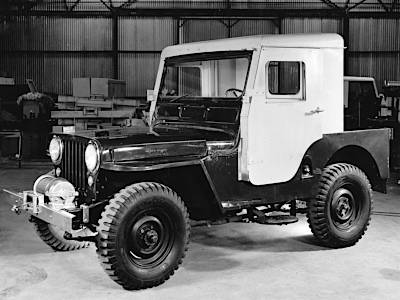 Another CJ-3A, with winch and Koenig Jiffy Cab installed, was photographed in front of a stack of the fairlead bumpers. This picture, with the background airbrushed away and the hardtop colored red, appeared in a Koenig brochure (150K JPEG). 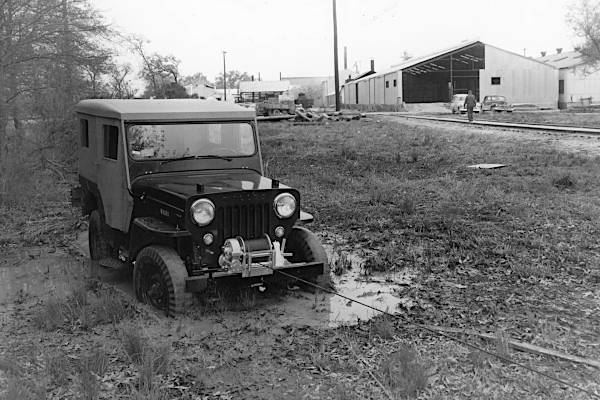 The corrugated steel building where the CJ-3A above was photographed, is probably the one in the background here. When the new high-hood Universal Jeep arrived in 1953 for test fitting and photo shoots, somebody had the idea of taking it out back to the mud hole for some action shots. 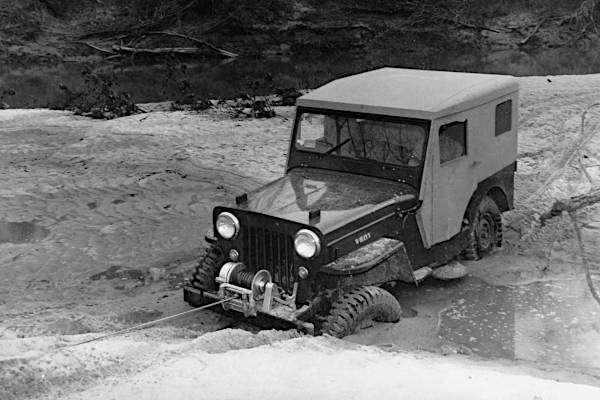 The photos show off the Koenig Standard Cab as well as the winch. The CJ-3B was undoubtedly Woodstock Green, so the top was probably light green -- beautiful combo. 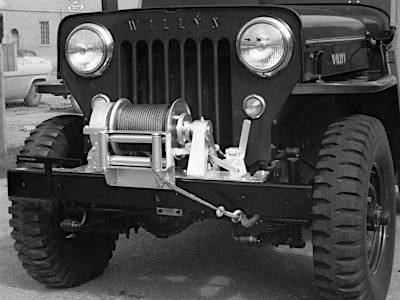 Here's a closeup of the same Jeep before they got it muddy, or maybe after they cleaned it up. This picture is dated 7 March 1953, so this is an early 1953 CJ-3B. Notice the license plate bracket and the missing footman loop at the top of the radiator guard. 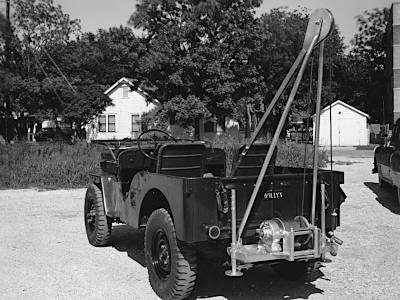 Probably the same Jeep once again, this time with the hardtop removed and a rear-mounted hoist installed. This picture was used for a few years on the winch page (100K JPEG) of the Jeep Specialized Vehicles and Equipment catalogue. 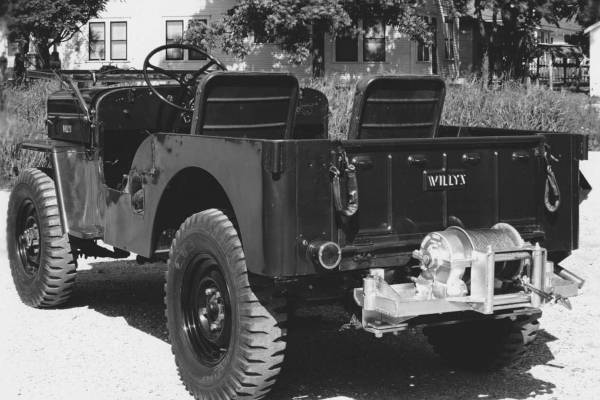 This is a closeup from the same photo shoot, of the Koenig 100 winch on the hoist platform attached to the drawbar. Other interesting details are the single ALA taillight, and the lack of a "4 Wheel Drive" stencil on the tailgate. 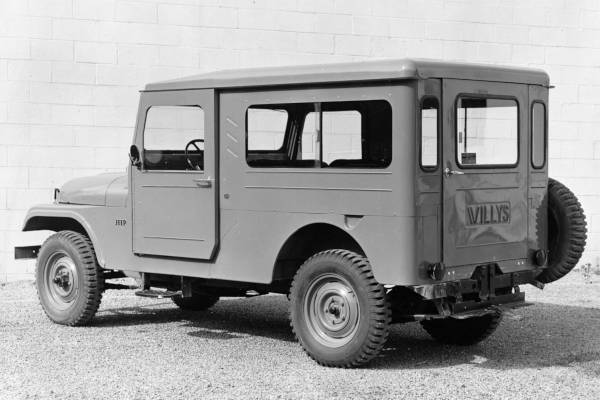 The Willys stamping on 1950s tailgates apparently inspired Koenig to put the trademark on the rear door of this classy steel top. They got the "W" right, but not the "Y" or "S".

This top may be a prototype that didn't go into production, but it's painted to match the CJ-6. Maybe Transport Yellow or Diamond Blue? 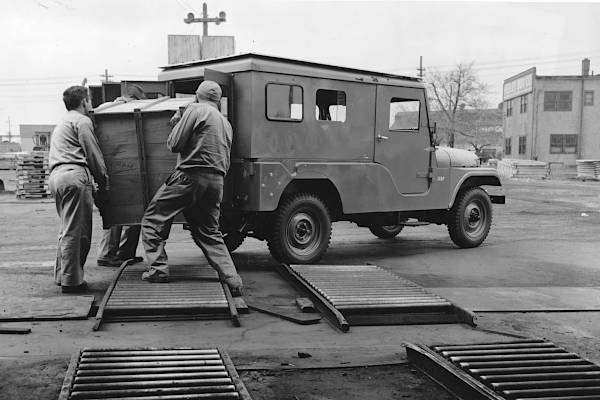 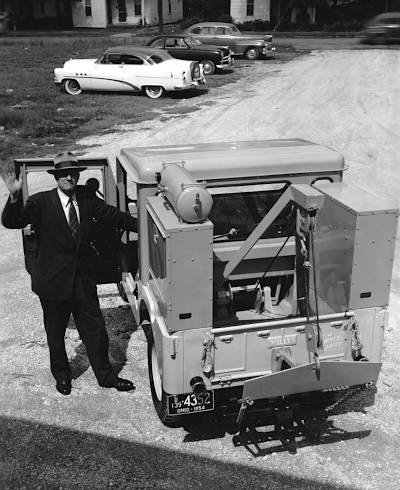 Also in Toledo, judging from the 1954 Ohio plate, is this full-service wrecker powered by a center PTO winch. The Jeep is a very early CJ-5 with ALA taillights, and possibly this potential customer has parked his Buick to take a look at the nifty little wrecker, complete with air tank. 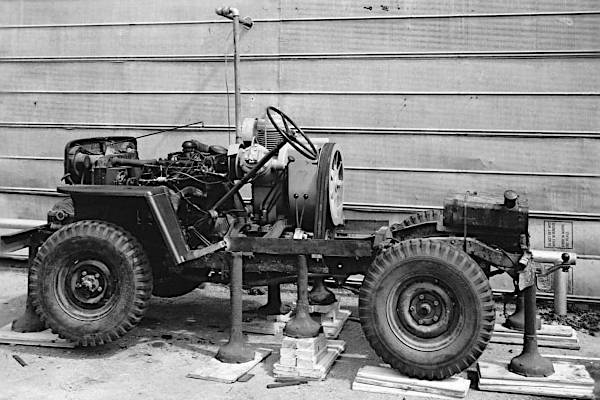 If your shop needed a reliable compressed air system to fill up a portable tank, this would be one way of setting it up! A rolling CJ-3B chassis, supported on jack stands made from axle housings, runs a compressor from the center PTO. The gas tank is moved to the rear to make room for the frame holding the compressor. We don't know if this is part of the Koenig plant, but the Jeep does have a winch on the front. 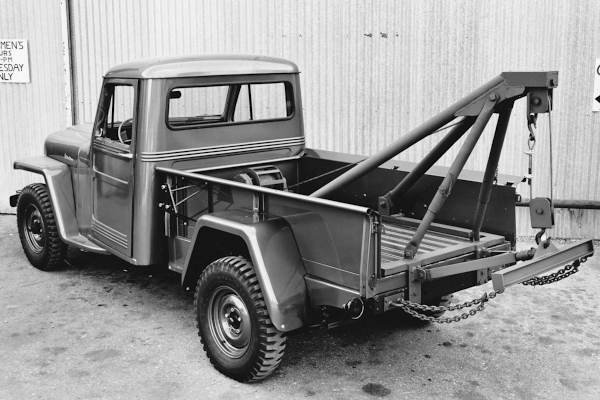 Here's a more basic wrecker, but it looks pretty nice on a brand new late 50s Willys pickup. No license plate or spare tire, and the four Goodyear NDTs are barely dusty. 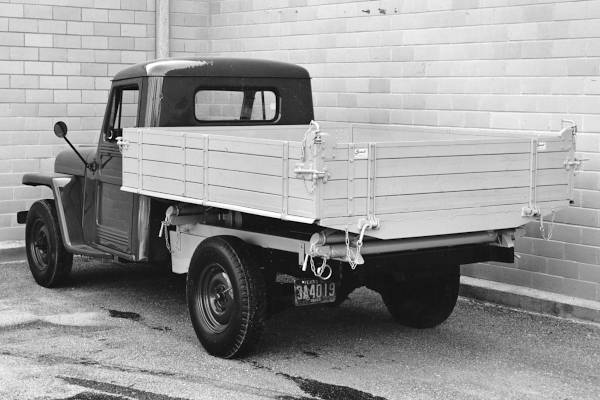 This 1956 truck has a dropside body similar to an Australian ute. It appears to have been manufactured by Servicall, so possibly Koenig made some of the components. See also the body sides folded down (300K JPEG). 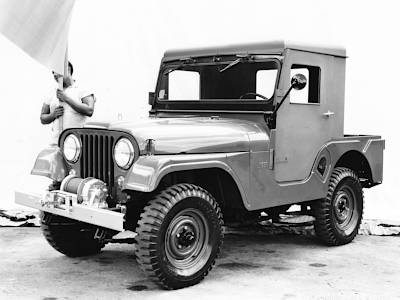 As soon as the Willys CJ-5 hit the market, Koenig started doing promotional photos of its equipment installed on the new Jeep. It's not clear why they took this one while the guy was standing in the background. 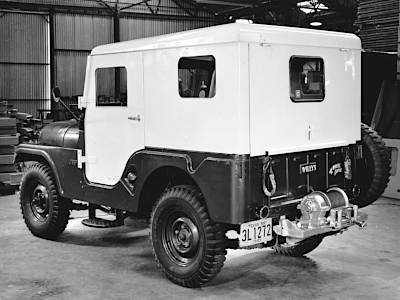 Back inside the Koenig warehouse for this shot of a 1955 CJ-5 with a full cab and a rear winch on a hoist platform. 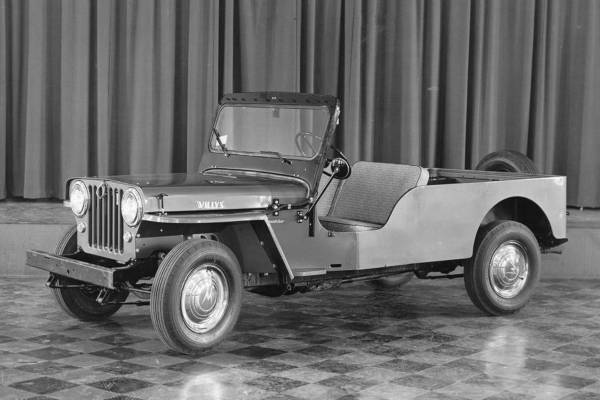 Bill Prince comments that some of the photographs were sent to Koenig, as well as other service body and winch manufacturers, directly from the vehicle manufactures like Willys, to inform them of new or changed vehicles and information on them such as truck CA (cab to axle) dimensions, so that accessories could be revised.

This December 1958 photo was clearly taken by Willys to show off the concept of a DJ-3A with twenty inches added, but in the end it didn't get past the concept stage, so Koenig didn't need to make a hardtop for it. 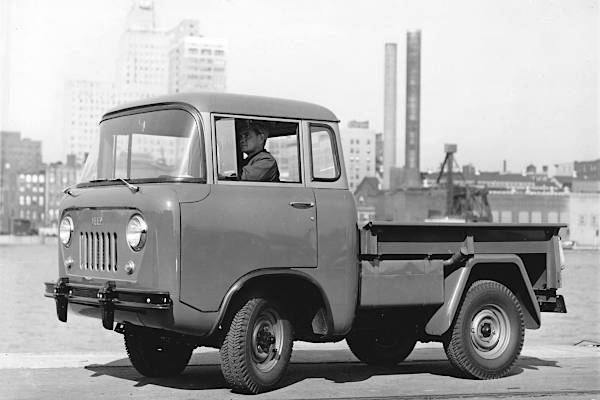 Here's a nice Willys photo, this time showing off a vehicle that was actually in production. The new Forward Control FC-150 posed on the Toledo waterfront, probably in 1955. 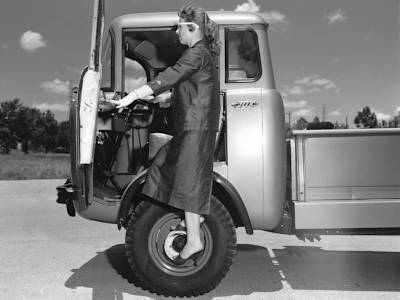 Other photographs were taken for Koenig by a well known industrial photographer in Houston by the name of Lawless & Son, featuring Koenig's equipment such as winches, cranes, and service bodies. In this case, a 1958 idea that didn't really take off, for a Forward Control step. They may have got the idea from a Unimog, and a similar step was later used on the Land Rover Forward Control. See a closeup of the step (80K JPEG). 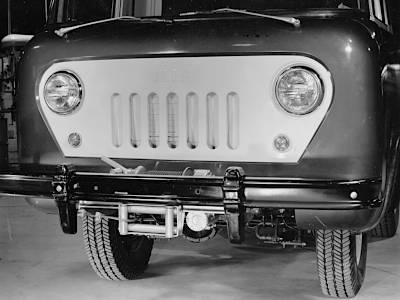 Another Lawless & Son photo shows a low-profile winch installation on a narrow-track FC-150. 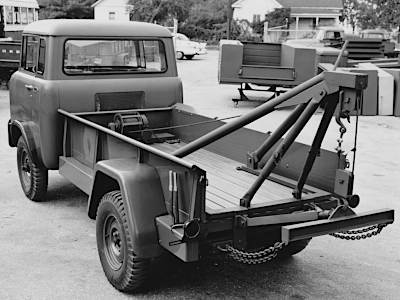 One more Forward Control, an FC-170 wrecker, with remote control levers for the center PTO winch. No photographer credit on this one, but it's clearly taken at the Koenig yard in Houston, with a service truck body in the background. 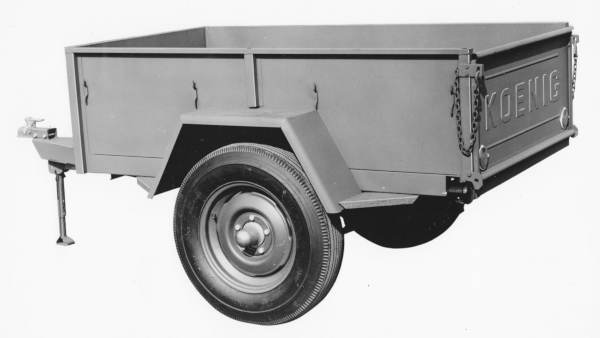 Koenig is not well known as a manufacturer of Jeep trailers, so it's interesting that Bill's collection of photos includes a couple showing trailers.

One of the most surprising pictures is this one of a display of all the parts of that went into a Koenig trailer. 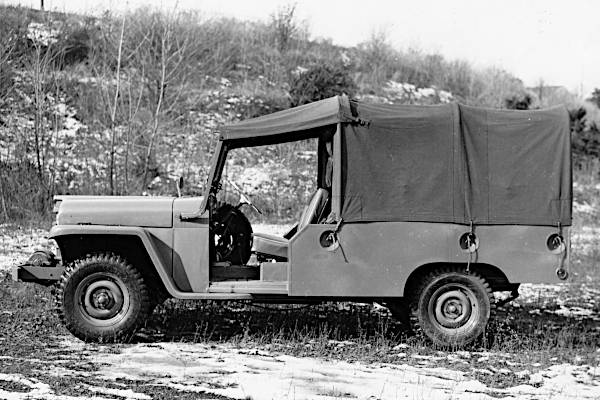 Finally, one of the more rare Willys vehicles: the Cargo-Personnel Carrier. It was advertised as the perfect truck for moving crew or equipment to industrial projects such as pipeline construction, but the foreign military market may have turned out to be where most were sold. Apparently the limited demand and the overall length of 191" meant Koenig did not invest in doing a hardtop for the CPC, but they were happy to put a winch on it.


Thanks to Bill Prince for saving the photos, and Christián Podlesker for interviewing Bill for this article. -- Derek Redmond

Return to Unusual Photos or to Jeep History on CJ3B.info.