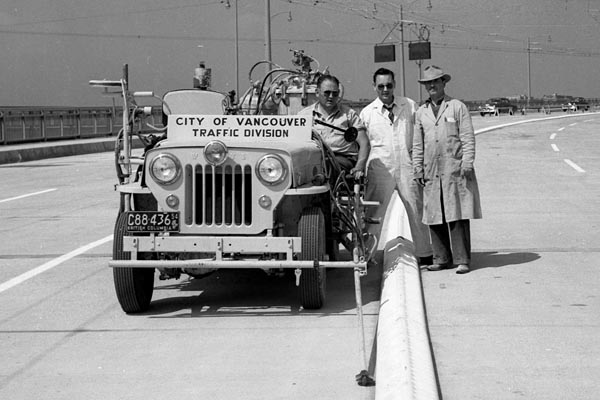 A City of Vancouver CJ-3B and three Traffic Division employees were photographed later that year by Lew Parry as they painted traffic lines on the bridge.

Federico Cavedo found the photo in the City of Vancouver Archives. See also a wider view including a better look at the electric trolley bus wires (130K JPEG). 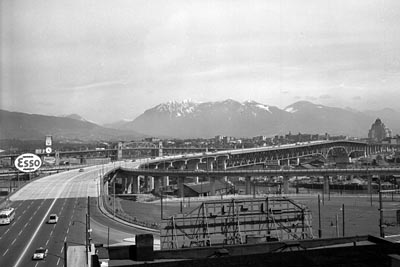 The Granville Street Bridge dominated the skyline of Vancouver, and many people still feel that it's too big. SpacingVancouver.ca comments, "It was out of scale with its surroundings when it was built, and it is even more so now that the area is becoming residential neighbourhoods. A massive 27-metre high eight-lane concrete monster, it is probably the most pedestrian- and bike-unfriendly bridge in the City of Vancouver. Of course, sidewalks were merely an afterthought in an age when streetcars were being taken off the roads, cycling was only for weekend pleasure, and everyone was expected to eventually own a car."

This May 1955 Lew Parry photo, also from the city archives, shows a trolley bus coming off the bridge. 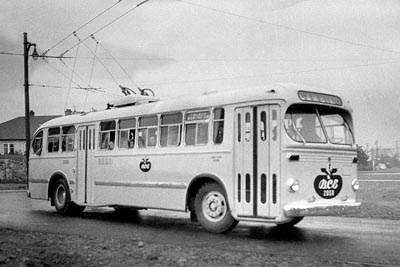 Vancouver's trolley buses, operated by British Columbia Electric Railway (BCER), had begun running in August 1948, and by 1955 when the last streetcar line closed, BCER had 327 Brill trolley buses on 19 routes. As of 2013 there are still 262 newer buses on 13 routes (Wikipedia). The city archives has many pictures of the trolley buses, including this 1948 photo by Walter E. Frost, of yellow-painted Brill 2050.

But there are no other photos of the CJ-3B that painted the lines on the street. 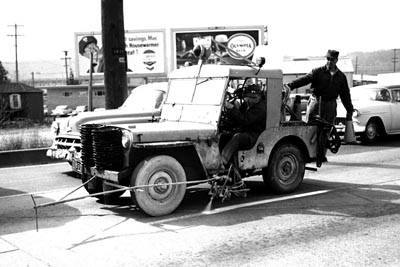 I hadn't previously seen any photos of these line-painting Jeeps. Perhaps they were built on the west coast, because Federico found some similar photos from the 40's and 50's in the Seattle Municipal Archives, including this CJ-2A in action on 27 March 1958 at 1st Ave. S. and E. Marginal Way in Seattle. 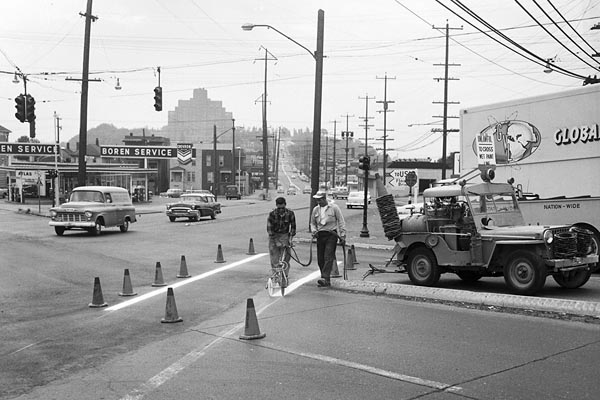 The CJ-2A could also be used with a hand-operated sprayer, seen here painting a crosswalk at 12th and Boren in Seattle on 8 September 1958.

A sign mounted on the roof of the Jeep reads "Unlawful to Cross Wet Paint Line." 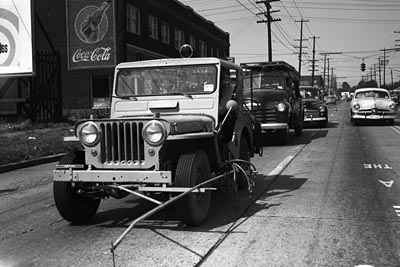 Maybe this CJ-3A should have been carrying one of those signs. The large version of this photo from 23 April 1951 clearly shows that cars (possibly including the one carrying the photographer) have been driving over the fresh paint.

This picture also comes from the Seattle Archives, so the city apparently had at least two of these Jeeps. I would be interested to see photos from other cities, particularly any with CJ-3B line-painting vehicles.

Thanks to Federico Cavedo for his research, and to all the municipal archives and archivists who work to preserve the records of our past. -- Derek Redmond