The CJ-3Bs of Davis Scenic Tours 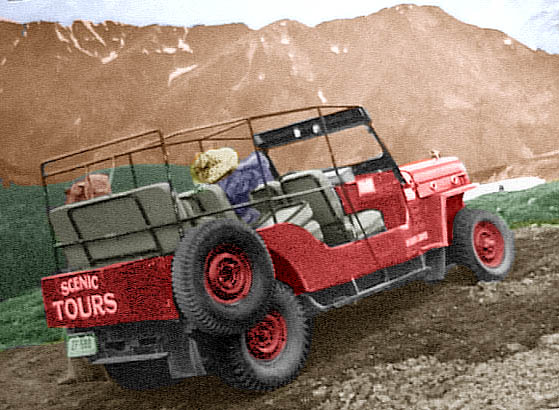 San Juan Scenic Jeep Tours, the oldest and largest of the 4x4 tour businesses in Colorado. They offer Jeep rentals to explore the hundreds of miles of trails in the Ouray area, and guided tours in their custom-built open Jeep vehicles. "We drive, you look" has been their motto for over 50 years, and most of that driving has been in Jeeps.

The photos seen here are my colorized versions of a couple of black & white (130K JPEG) archival photographs of a CJ-3B belonging to San Juan's predecessor Davis Scenic Tours. The Jeep may actually have been green (40K JPEG) rather than red. 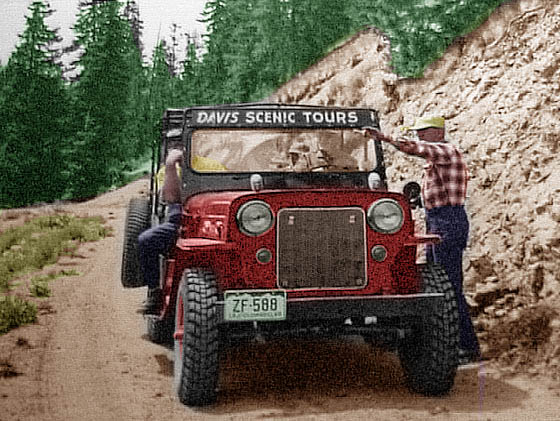 According to David Fetherston, in Jeep: Warhorse, Workhorse and Boulevard Cruiser, the tour business was started as Davis Scenic Tours in 1946, by Buddy Davis. The company was bought in 1959 by Francis "Bernie" Kuboske, who renamed it San Juan Scenic Jeep Tours, and modified a CJ-5 as his first new vehicle.

These photos suggest that Davis Tours had stretched CJ-3Bs which continued in use after the firm was bought by Kubeske, because the Colorado plate here appears to be 1960-61. The portholes in the side of the hood are possibly vents, or just a decorative touch inspired by Buick. The hood blocks also appear to have been modified. 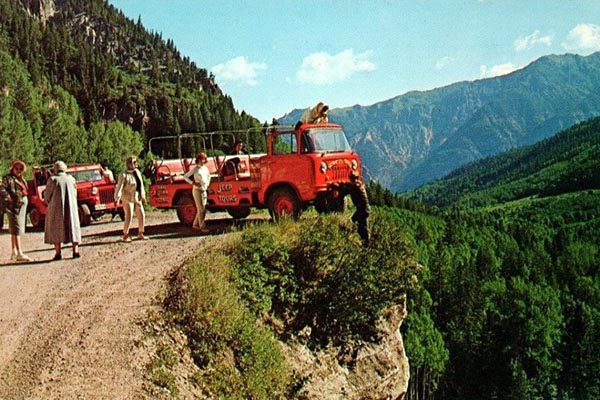 A 1966 postcard shows an FC-170 at a spot called "Drinking Cup" on Camp Bird road outside of Ouray, where miners reportedly stopped to water their mules at a natural spring. In the background is a CJ-3B in San Juan's all-red paint.

Thanks to Craig Brockhaus for the postcard. See also his restoration of the San Juan FC-170. 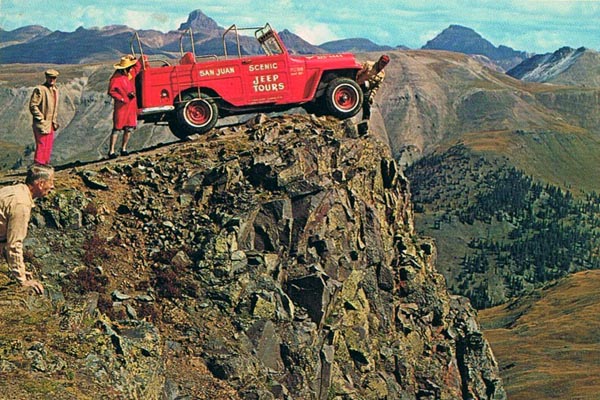 Another 1960s postcard shows a modified Willys wagon posed at "Ooh Aah Point," one of the most famous scenic lookouts in Grand Canyon National Park. This spot is no longer open to vehicles, but you can hike there on the South Kaibab Trail. 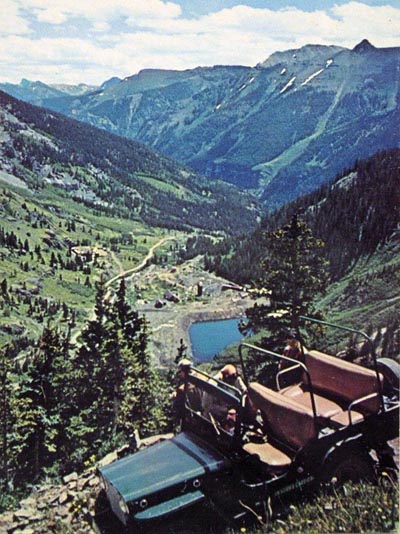 Here's an earlier color postcard showing a CJ-3A, on a trail above the historic Revenue Silver Mine, southwest of Ouray. This picture suggests that the flatfender Jeeps used by Davis Scenic Tours were in fact green. The 3A has the same vents in the hood, and a rear body extension to accommodate luggage and lunch.

That first San Juan Tours CJ-5 as seen in Fetherston's book was also green. Most of the later San Juan Jeeps were red (until rival companies started painting their vehicles red, and San Juan switched to yellow.)

I'll have to keep looking for a true color photo of a Davis Tours CJ-3B. 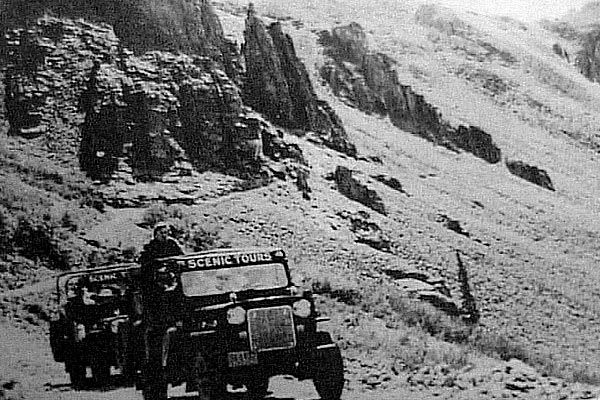 Some of the grayscale archival photos I have seen are poor reproductions, but still the breathtaking scenery is obvious. And travellers today see the same scenery, although from slightly newer, stretched Jeep vehicles. 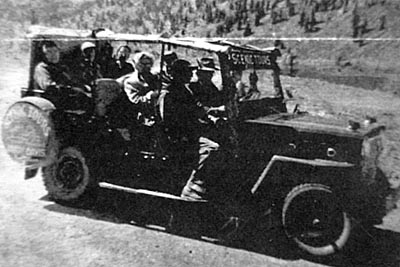 The mountain trails around Ouray, Colorado are now also travelled by other 4WD tour companies. The original San Juan Scenic Jeep Tours is at The Historic Western Hotel lobby in Ouray, Colorado.

Thanks to the former online Jeep magazine JJournal.net for finding the archival photos. -- Derek Redmond

Elsewhere on the web, see the history of Buddy Davis and Bernie Kuboske in Genesis of San Juan 4x4ing.