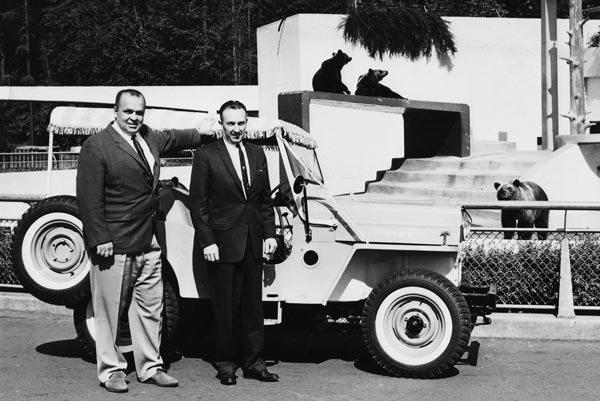 Like our July 2013 cover page photo of the 1961 Beach Car in Australia, this photo of a Surrey-style CJ-3B in front of the bear enclosure at the Portland Zoological Gardens in Oregon, tells us a bit more about a part of CJ-3B history that was unknown until recently. This picture reveals a third example of a CJ-3B built to look like a two-wheel-drive DJ-3A Surrey.

The photo raises more questions than it answers, but I hope we'll be able to track down more information. Here's what we know so far:

Paul Barry of Willys America received the photo among items from Robert "Bob" Jarvis, former owner of Jarvis Jeep in Portland, who is seen on the left in the photo. Paul is hoping Bob or his sons may remember more details, but they do recall that the Jeep was blue. Tropical Rose was the most popular and distinctive Surrey color, but that shade of reddish pink usually looks darker in black and white photos (130K JPEG), so this picture confirms that the lighter Cerulean Blue (110K JPEG) was probably used on this Jeep.

Staff at the zoo, now known as the Oregon Zoo, have dated the photo as shortly after 1959, when the zoo had moved to new grounds which still appear very fresh in the image. The second man cannot be identified as a zoo employee, and the Jeep does not show up in any other photos in the zoo's archive, so apparently it was not purchased by the zoo.

Perhaps this was a "safari" promotion by Jarvis Jeep. Does it show Bob presenting the Jeep to a contest winner? Lucky guy...

This example is a more accurate replica of a Surrey than the pink CJ-3B found in Ohio (see High Hood Surrey on CJ3B.info.) Body color windshield frame, windshield straps, side steps and whitewall tires are all details which make it more convincing. But it is missing other Surrey features found on the Australian "beach car" such as chrome bumpers, and rear-mounted spare with striped cover.

The biggest question is the same one raised by the Australian example -- why go to the trouble of turning a CJ-3B into a Surrey, instead of just buying a less-expensive two-wheel-drive DJ-3A Surrey? Hopefully we'll uncover some answers.

The Oregon Zoo is one of the oldest zoos in North America, although it has had some changes of name and location. The original Portland Zoo was established in 1888 with bears and other animals collected by Portland pharmacist Richard Knight. It grew to over 300 animals in the 1890's, but declined in the first half of the 20th century. 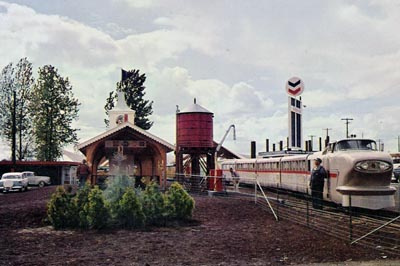 The city and other donors provided funding to rebuild as the Portland Zoological Gardens in 1959, including the famous Zoo Railway. The Zooliner (left) and two other trains still carry vistors through the zoo and to nearby Washington Park, and it is the last operating U.S. railroad with its own authorized railway postal cancellation. Postcard courtesy of Lost Oregon.

Undoubtedly the city of Portland would have been excited about the new zoo in the early 1960s, so it would have been a great place for a Jeep photo op. Stay tuned for further information.

Thanks to Paul Barry and Colin Peabody, and Michael Durham of the Oregon Zoo. -- Derek Redmond