This is the most heavily customized CJ-3B I've run across, and it appears to be mechanically very capable as well. It was sold in 2000 by Tara Beeman of Boise, Idaho, whose father built the Jeep.

Mick Lee wrote in 2005 to say, "The yellow quad-headlight Jeep resides at a automotive restoration and sales facility on Hwy. 43 about 75 miles south of Green Bay, Wisconsin. The guy is asking like 25,000USD for it. It is beautiful -- I looked at it when I was driving my 1980 CJ-7 up to Boy Scout camp from Chicago." 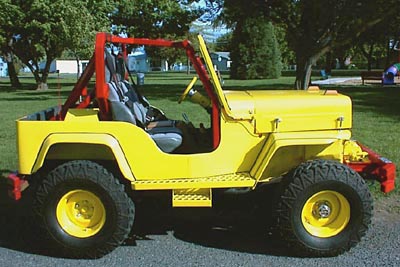 Tara says, "This Jeep is a 1954 CJ-3B high hood Willys and was fully customized by my father, but when finished was only used minimally. This great Jeep has won 1st place in both of the roadster shows that it has been shown in. It was put in storage for the last 5 years but was occasionally started, and it runs great. The engine is a 6-cyl Buick motor (70K JPEG) out of a late 1970's Jeep -- it has been rebuilt and has less than 100 miles on the engine. It has engine headers with a Cherry Bomb muffler and the original transmission to match the engine." 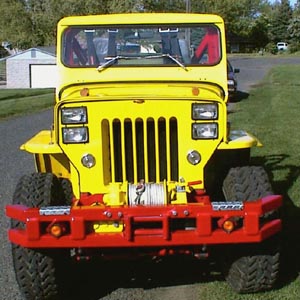 "The frame has a 3-inch lift and also a 2-inch body lift (50K JPEG). Everything on the frame is rubber mounted. The tires are Mickey Thompson 35x11-5 Baja Belted. The power brakes and power steering are Chevrolet, and the quad shocks (60K JPEG) are Monroe. The front-mounted winch has a 4-ton capacity. Quad square headlights adorn the front instead of the large round original headlights. There are minimal chips to the paint that have been touched up." 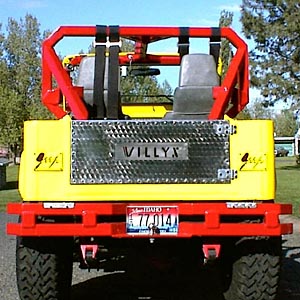 "The dash, firewall, and tailgate are jeweled stainless steel. The 3-inch square tube front and rear bumpers match the six-point 3-inch square tube roll bar that is mounted into the frame not the body. The custom 14-gallon fuel tank has an explosion-proof fuel cap and is no longer under the driver's seat. The running boards and fender flares are completely custom built. The taillights illuminate the word 'Jeep', and the brake light in the tailgate when lit says 'Willys'. This Jeep also has a 2-inch hitch ball." 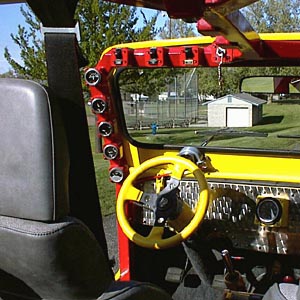 "All of the Warner gauges, Kenworth rocker switches and the ignition, are mounted into the roll bar. The steering column has a tilt and telescoping action, and a matching yellow Grant steering wheel. The Jeep now also has hanging brake and clutch pedals. The handmade oak console (70K JPEG) cradles a waterproof Jensen cassette stereo that is powered by an Acoustic Power Logic 360-Watt amp. Mounted into the roll bar are the midrange and tweeter speakers, then mounted in the rear fenders are the 12-inch Kicker woofers. The interior is all done in light gray upholstery. The highback bucket seats are embossed with the Willys symbol, and have 5 point Pyrotect race car safety harnesses. The shift covers are genuine moosehide."

Thanks to Tara for the photos. -- Derek Redmond