Not long after three Boy Scouts returned from driving a CJ-3B from Brazil to Alaska and back in Operation Pineapple, another group of Brazilian Scouts decided to launch their own year-long Jeep trip. The name they gave it was a bit of a mouthful: "The Baden-Powell Jeep Willys AfricaEuropeAmerica Expedition."

This trio of Scouts was Gabriel Paula Fonseca Jr., Everardo de Mello Nogueira and Paulo Pinheiro de Andrade. Through a family friend who owned a Willys dealership they managed to get an appointment with Hickman Price, Vice President of Willys Motors in the U.S., who was in charge of Willys-Overland do Brasil. He immediately agreed to lend them a Jeep, and it was again nicknamed Verde Amarelo ("Green & Yellow.") This time it was a Brazilian-built CJ-5, but topped with the same steel hardtop used on Operation Pineapple's CJ-3B. 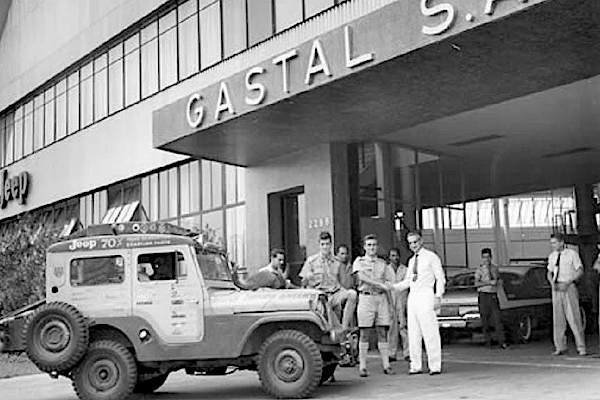 The Scouts worked at the Willys plant for two months to familiarize themselves with all parts of the CJ-5. Their Jeep was proudly labelled as containing 70% Brazilian-made parts, some of which were installed by the Scouts to replace imported parts.

Shortly before their departure from Rio de Janeiro, they posed for this photo at the Gastal S.A. Willys dealership, well known for the large "W" on their building (70K JPEG).


The Baden-Powell Expedition left Rio on 22 February 1957, crossing the Atlantic on board a Dutch ship sailing to Cape Town, South Africa. From there, the Scouts' first stop was Mafeking (now called Mahikeng), where Colonel Baden-Powell had become a British national hero in 1900, during the Second Boer War. The siege of Mafeking was a 217-day battle (October 1899 to May 1900) in which Baden-Powell's troops successfully defended the town against a large Boer force. 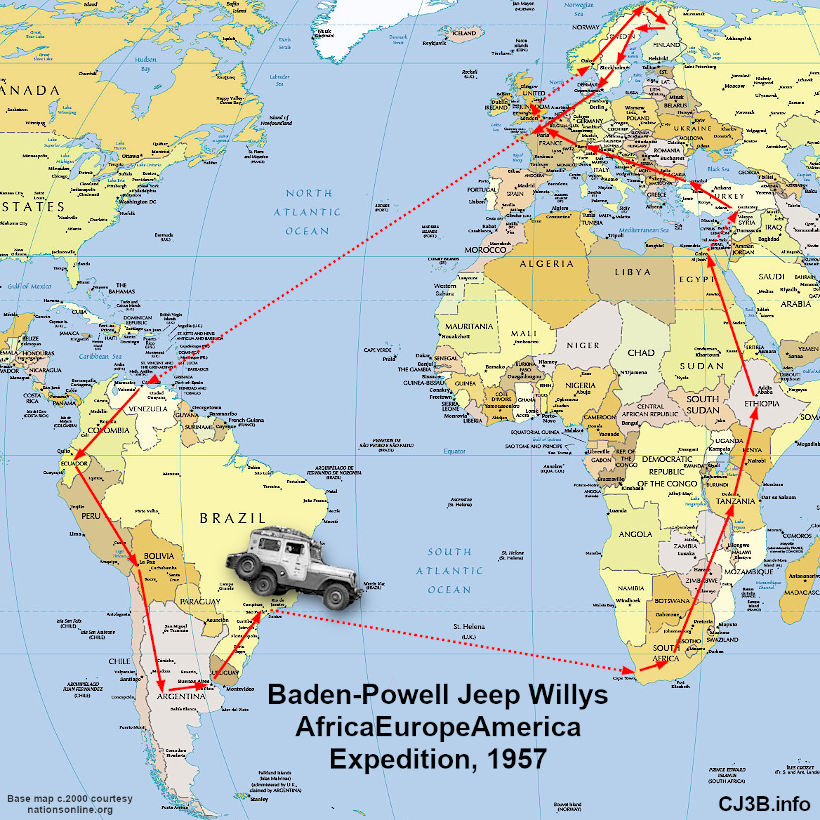 Gabriel, Everardo and Paulo drove across 35 countries during exactly one year of travel. They reported that the Jeep consumed about 15,000 liters of gasoline, twelve tires and dozens of inner tubes. Every two hours on the road, the three took turns at the wheel. 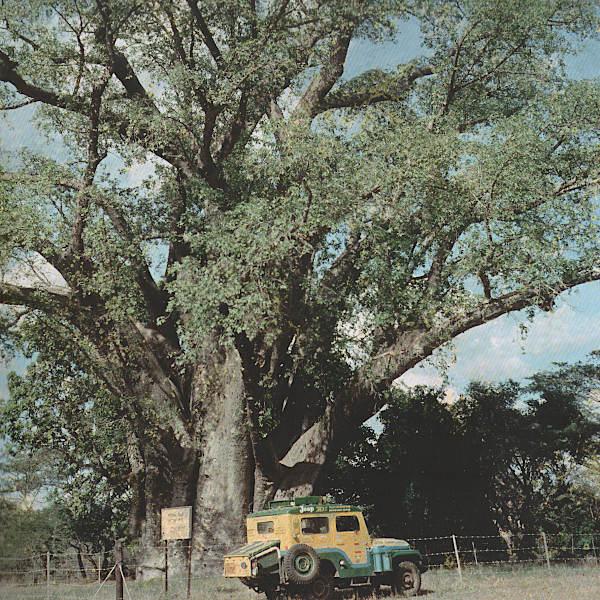 In Southern Rhodesia (now Zimbabwe), Green & Yellow posed for a photo in front of the massive baobab tree known as "Big Tree at Victoria Falls," which as of 2021 is still a tourist attraction, measures some 73 ft. (22 m) around, and is estimated to be up to 2000 years old.

Further north, in Tanganyika (now Tanzania), they climbed 6,000 meters up Mount Kilimanjaro, reportedly the first Brazilians to undertake this trek. Attempting to do it too quickly, they suffered mountain sickness (lack of oxygen) but one of them eventually made it to the top. 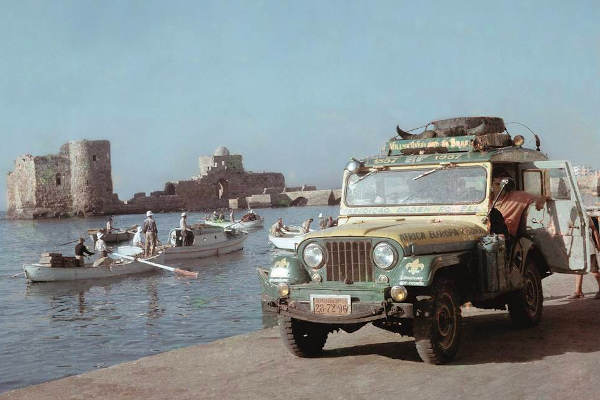 The plan to head north from Egypt into Israel was foiled by the tense standoff between those countries following the 1956 Suez Crisis (see UN Jeeps in the Sinai Peninsula, 1956-79 on CJ3B.info.) So the Scouts and their Jeep had to travel by ship across the Mediterranean to Beirut. 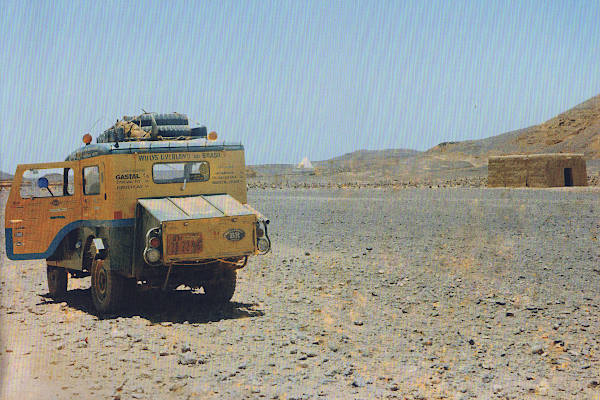 Still ahead was the drive through Europe and another boat trip across the English Channel, to reach the World Scout Jamboree (750K JPEG) in England.

Gabriel later told Rio de Janeiro newspaper Correio da Manhã, "On the afternoon of July 31, with incredible punctuality for such a long trip so full of unforeseen events, we arrived with a great deal of noise and bursting with satisfaction at the Brazilian camp at the Jamboree in Sutton Coldfield. The emotion that we felt at that moment was the best thing of the trip." 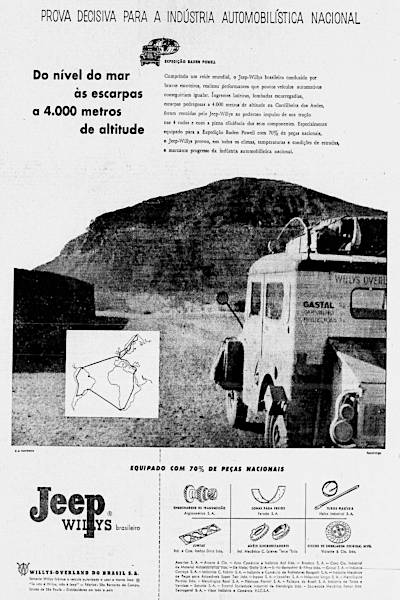 After touring Scandinavia and sailing back to South America, the trio followed the Pan-American Highway south to Brazil. As their homecoming approached, Willys-Overland do Brasil ran this newspaper ad on 15 February 1958 promoting the locally-made parts, with a photo taken in the Andes. The heading reads, "From sea level to escarpments at an altitude of 4,000 meters."

Another ad on 13 February (420K JPEG) was headed, "Mud, asphalt, snow and sand across 3 continents."

"Yesterday the Green-Yellow Jeep arrived in Rio around 11 AM, with the three Scouts who traveled about 56,000 kilometers in an excursion that lasted exactly one year. 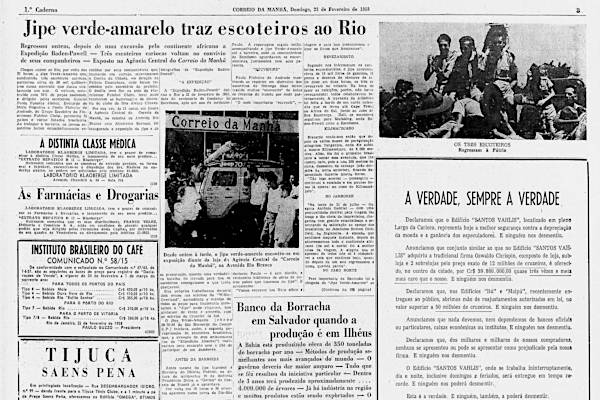 "The vehicle, built with 70% of national pieces, and driven by Scouts Gabriel Paula Fonseca Jr., Everardo de Mello Nogueira and Paulo Pinheiro de Andrade, from the Scout Group of the Fluminense Football Club, traveled 35 countries and several Brazilian states. The young Scouts were enthusiastically received by their companions who, forming a procession, crossed the City Center in the direction of Palacio Guanabara, where they were received by the mayor's secretary." 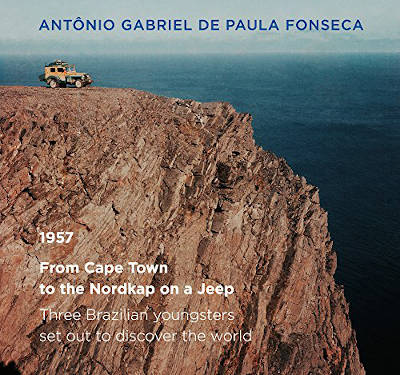 Not surprisingly the trio had some hair-raising adventures during their year on the road, and they are well recounted in a Kindle e-book published in 2018 by Antônio Gabriel de Paula Fonseca. Available in English and Portuguese versions, the e-book is called 1957: From Cape Town to the Nordkap on a Jeep: Three Brazilian youngsters set out to discover the world. Loaded with photos of the trip, it's available at Amazon.com.

See also the inspiration for this trip: Operation Pineapple.

See the history of Jeeps in Brasil on CJ3B.info.