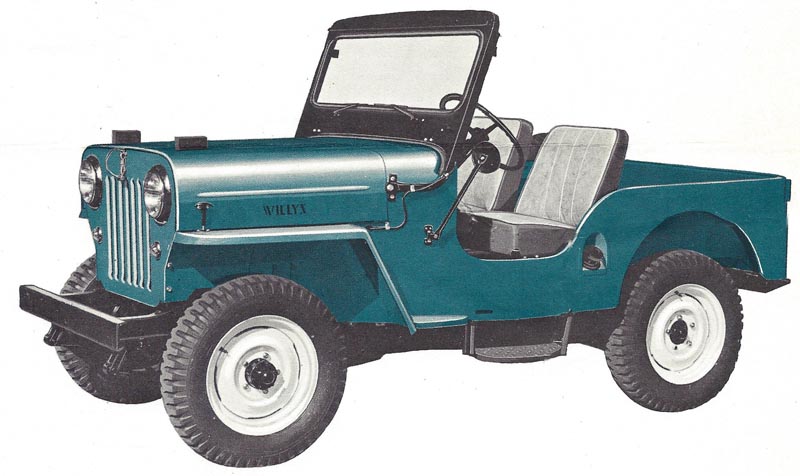 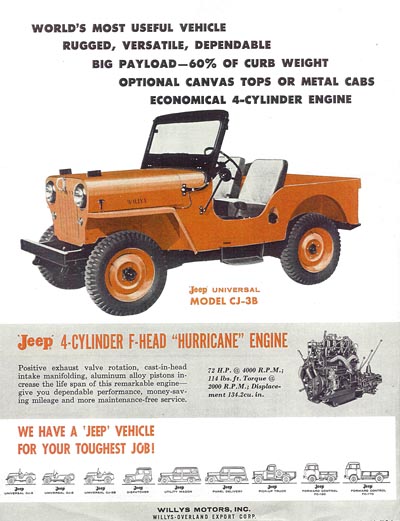 Willys Motors "Form No. 600-08" was an advertising brochure for the Jeep Model CJ-3B, printed in the late-1950s. The centerpiece of the folder was this classic retouched factory photo, tinted a color closer to "Peacock Blue" than to any green paint actually used on the CJ-3B. There was also an orange (Transport Yellow) version of the brochure, with slight differences from the blue version (160K JPEG) in some illustrations and text.

The interior of the brochure had a brief description and illustration of the Hurricane engine (50K JPEG), as well as a drawing of the full line of Jeeps. The blue brochure included two more Jeep models in the lineup than the orange version -- the DJ-3A Surrey and the FC-170 stakebed truck (see below). 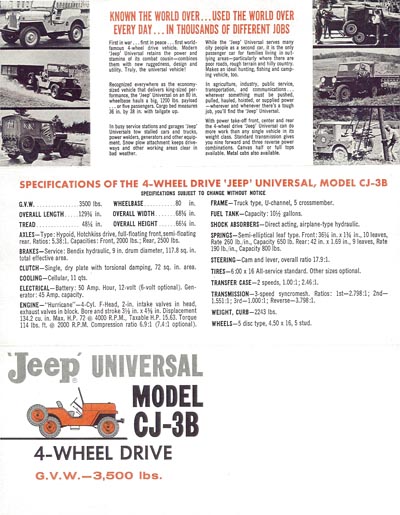 The other side of the folder featured a side view drawing of the CJ-3B (170K JPEG) and a summary of CJ-3B specifications.

The text in the blue version was headlined, "Economy-size chassis... King-size performance." The first paragraph was re-written from the slightly awkward orange version, and went on to say, "Known and used the world over, the 'Jeep' Universal CJ-3B combines 4-wheel drive experience with modern styling and design(!) New color and trim options; traditional ruggedness, power, dependability."

This publication was replaced with an all-new folding brochure in 1962. The new brochure included drawings of the Wagoneer station wagon and Gladiator truck introduced that year.

Thanks to Steve Chabot for the orange brochure. -- Derek Redmond

Last updated 15 May 2017 by Derek Redmond redmond@cj3b.info
https://cj3b.info/Brochure3.html
All content not credited and previously copyright, is copyright Derek Redmond