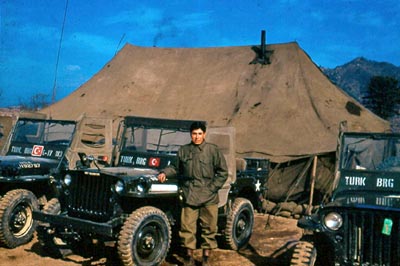 Like many American allies during the Cold War, Turkey received Jeeps, among other military equipment, from the U.S. Mutual Defense Assistance Program.

This photo (right) shows Willys MB's attached to the Turkish Brigade in Korea. The picture (photographer unknown) may have been taken during hostilities or after the armistice, as some Turkish troops served in Korea through the 1960s. The jeeps are actually U.S. Army vehicles with temporary Turkish markings stencilled on the windshields. 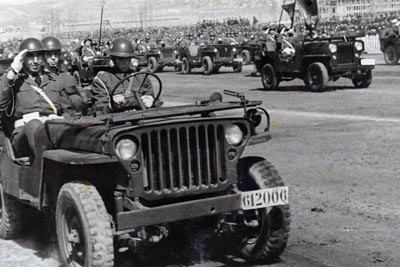 Serhat Güvenç located a parade photo taken on 3 April 1955 in Ankara. A single CJ-3B stands out among the parading MB's, although this was about a year before the Tuzla plant in Turkey began to assemble CJ-3Bs for the Army (see below). Serhat speculates, "Since the registration number of the MB in the photo suggests that it belonged to the Air Force, that service might have commissioned some examples of the CJ-3B before the Army could get its Tuzla-assembled militarized CJ-3Bs. Another explanation might be that it is the CJ-3B presented as a gift to Turkey's President when he visited the Jeep factory in Toledo back in 1954. Of particular note on this sole CJ-3B is that it is missing the spare tire which was normally mounted on the right hand side of the vehicle." 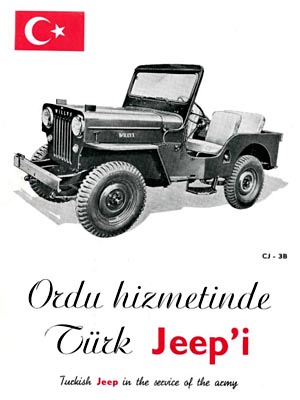 In the mid-1950s, Türk Willys Overland, Ltd. was formed by Willys Motors and distributor Verdi Ticaret Limited of Istanbul, and built a Jeep factory at Tuzla, near Istanbul. According to this 1960 publication (left) promoting the Tuzla plant, 1600 military CJ-3B Jeeps had been assembled at Tuzla by 1960, from parts supplied under U.S. military aid. This was in addition to over 2000 civilian Jeeps, including CJ-3B and CJ-5 models.

The booklet was titled "Turkish Jeep in the service of the army," although the illustration on the cover was clearly the civilian 3B. Text on page 5 states that the CJ-3B, "renowned as the most efficient and rugged vehicle, is being used by the armies of the world since the Second World War."

Thanks to Serhat Guvenc for scanning the booklet. See photos from the booklet in Tuzla Jeeps in Turkey on CJ3B.info. 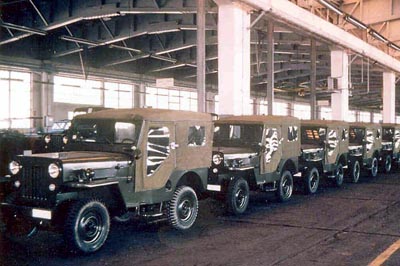 This photo found by Tony Phillipson, General Manager of the Rahmi M Koç Museum in Istanbul, shows military CJ-3Bs at the Tuzla plant. Seen in the background is what appears to be perhaps the front grille of a CJ-3A.

According to research by Tony Phillipson, "In 1972, following a military coup, the factory came under the control of the Turkish Armed Forces and was renamed '1013 Ordu Donatim Ana Tamir Fabrikasi' (1013 Military Equipment Main Repair Factory). The plant still exists and is presently under the aegis of the 'Ordu Donatim Malzeme Lojistik Müdürlügü' (Military Equipment Supply Logistics Directorate)." 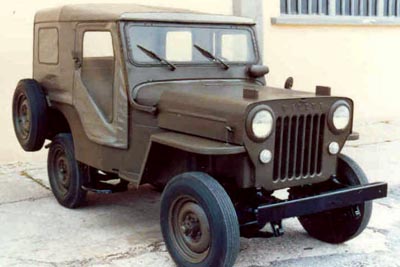 The externally-mounted windshield wiper motor never appeared on CJ-3Bs built in the U.S., but it did appear on Kaiser Jeep CJ-5s starting around 1969. This suggests the Tuzla CJ-3Bs may have been built into the 1970's. 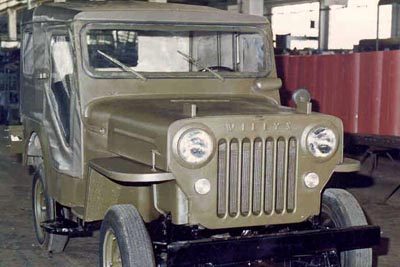 These factory photos also suggest the 3B was built with either side-mounted or rear-mounted spare tire, and that it may have been finished with various slightly different military paints, although it is difficult to tell because of the varying lighting conditions for the photos. They all have full canvas tops. 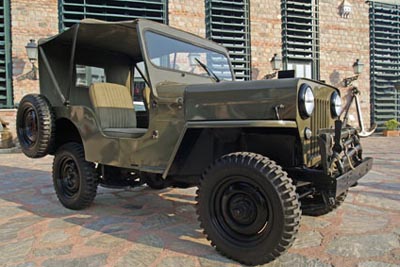 Also on CJ3B.info, see detailed photos of this Restored Tuzla Jeep in the Rahmi M Koç Museum, with a simple military-style canvas tilt roof. The Hurricane engine found in this Jeep can be dated by its engine number to 1953, so CJ-3Bs were perhaps built at Tuzla for two decades.

A full set of shovel, axe and pickaxe is mounted behind the front bumper. 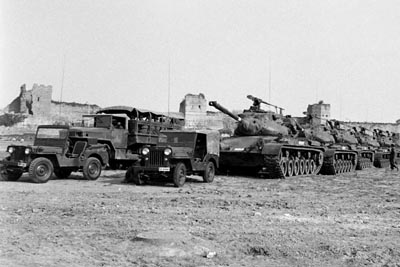 A CJ-3B is seen here in May 1960, at the head of a column of Turkish tanks. It does not have the external wiper motor seen on the later Tuzla 3B's, nor does it have military accessories like the blackout lamp or front-mounted tools.

Beside the 3B is what appears to be a militarized CJ-3A. (I have not seen any specific reference to 3A's being built at Tuzla, although the assembly line photo above shows what may be a 3A grille in the background.)

These photos were taken by LIFE magazine photographer James Burke during the meeting of NATO foreign ministers in Istanbul, Turkey in May 1960, a period of high tension in the Cold War. 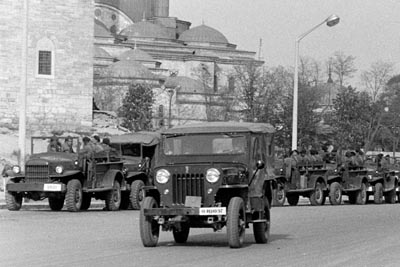 In actual fact, the Turkish army was mobilized in May of 1960 not to protect NATO ministers from the Russians, but to protect the repressive Turkish government from student protests. The CJ-3B passing a convoy of troops in this photo, looks like it has a general's star mounted on the front bumper. The ventilating windshield with top-mounted wipers is a feature that suggests this Jeep may not have been a Tuzla product.

Two more Jeeps with ventilating windshields (140K JPEG) are evident in a shot of troops on standby. Other photos from the LIFE archive include a fleet of Jeeps and trucks waiting behind Istanbul's magnificent 16th-century Bayezid Mosque (100K JPEG). 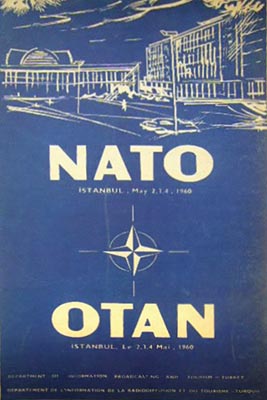 The Turkish Department of Information, Broadcasting and Tourism produced this guidebook (left) for the 1960 NATO foreign ministers' meeting. One subject that was likely discussed in the back rooms, was the disagreement between NATO members Greece and Turkey over the Mediterranean island of Cyprus.

See Turkish Invasion of Cyprus, 1974 for photos of Turkish Army CJ-3Bs in action in Cyprus.

In 2011 we learned that The Last Turkish Army CJ-3Bs were just going out of service. 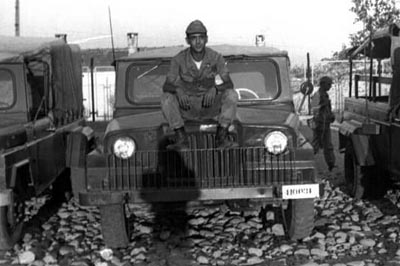 The Tuzla plant went on to build other Willys vehicles for civilian and government use, and in the Kaiser era produced this simplified version of the Gladiator truck for the army.

Historic Military Vehicles Directory by the late Bart Vanderveen includes this photo of the Turkish Gladiator, and mentions the existence of a 1.5-ton DRW version. The bodywork was apparently designed by Kaiser to be simpler to produce overseas than the standard Gladiator sheet metal. (But American-built Gladiators were also exported to Turkey by Kaiser Jeep International Corp. in the 1960s.) 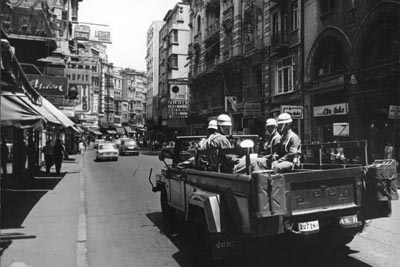 With rear fender extensions, this appears to be the dual-rear-wheels version of the truck, photographed in Istanbul in 1966 by Wolfgang Sievers. (Photo from the Wolfgang Sievers photographic archive at the National Library of Australia.)

This Kaiser photo of the simplfied Gladiator was taken at a display promoting the licensing of "Xport Low Investment" versions of Gladiator and CJ models, which could be built in overseas facilities with less investment in tooling. 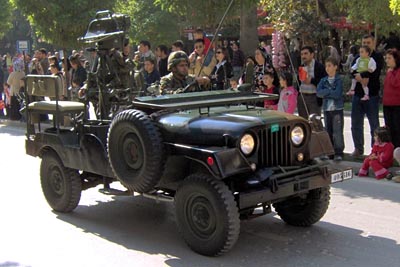 The Tuzla factory is no longer building variations of the CJ-5 and CJ-6 for military use, but these parade photos from DefenceTalk.com were reportedly taken in 2010.

This long-wheelbase Jeep carries a Milan anti-tank missile launcher, and has the front-mounted pioneer tools. See a left side view (110K JPEG) of this configuration. See also a slightly different version of the same vehicle carrrying a TOW missile (120K JPEG). 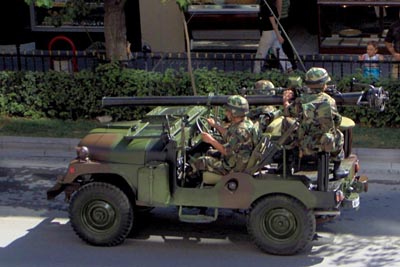 A variation of the CJ-5 is set up as the classic 106mm recoilless rifle platform, with the gap in the front windshield. See also a right side view (130K JPEG). 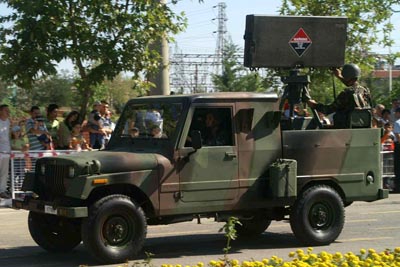 Another Turkish-built vehicle currently in use by the army is known as the Tayfun (40K JPEG). It's obviously Jeep-influenced, but whether it's built at Tuzla is unknown. 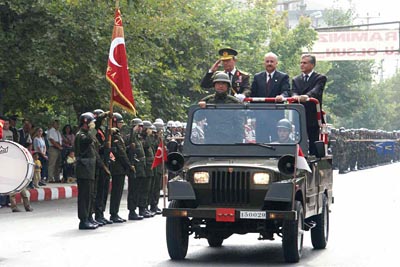 Here's another interesting Jeep photographed by Serhat. Apparently the ceremonial vehicle of the Commanding General of Army Corps V, it's an unusual configuration of the Tuzla-built long-wheelbase YJ. Seen here in 2002, it's flying the national flag and the flag of the Corps Commander, as he salutes the Unit Colors of an infantry regiment. 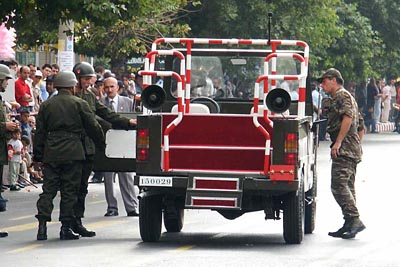 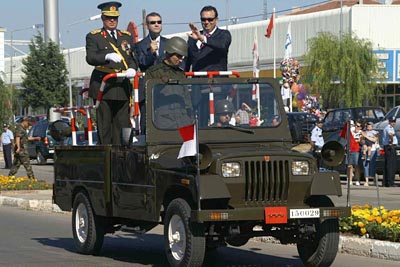 A front view of the same Jeep in 2006, carrying a new Commander.

Parade appearances may be the final duties for the Tuzla Jeeps, as Serhat notes that "Sadly, the Jeep has lost its reign to Land Rover with the Turkish Army."

See more on Stretched Jeeps in Turkey on CJ3B.info.

See also The Last Turkish Army CJ-3Bs and the history of Tuzla Jeeps in Turkey on CJ3B.info.