The Korando manufactured in South Korea by SsangYong Motor Company during the 1980's and 90's deserves at least a footnote in the story of Jeeps Around the World. Its legal relationship to Chrysler remains unclear; it is clearly a clone of the CJ-7, but the name "Jeep" was not used in Korando promotional literature. 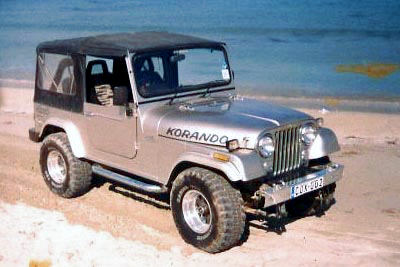 This Korando belonging to Ian Cilia Pisani on the island of Malta, was built in 1992 and is powered by an Isuzu 2.3 diesel engine which has a Daewoo badge.

Finding a Korando in Malta is actually not all that unexpected, since they were imported to another Mediterranean island -- Cyprus. Magnus Sigurjonsson reports also seeing one on the Spanish island of Mallorca.

Magnus adds, "Korandos of the CJ-7 and CJ-8 clone types (with hardtops) were imported here in Iceland. I believe it was in the late eighties, shortly after AMC stopped producing the CJ-7. I think they were only imported for a short period, one or two years."

Perhaps an agreement with Chrysler permitted the export of the Korando from Korea only to countries with no existing licenced Jeep distribution. SsangYong appears to have a well-established dealer network in Czechoslovakia now, so the Korandos may have been sold in Eastern Europe.

I'd be interested to know of other places where the Korando was imported; a glossy eight-page colour brochure from 1994 is printed in English, but its only reference to exports is a mention of victories in the 1990-92 Cyprus Rally Series. 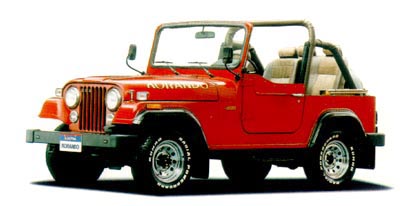 The brochure displays long (2880mm) and short (2390mm) wheelbase versions with soft top or steel hardtop in the Korando "R series". The "Korando 4" (numbered according to seating) seen at right, has bucket seats in the rear. See the full R series range (100K JPEG) including an ambulance version. 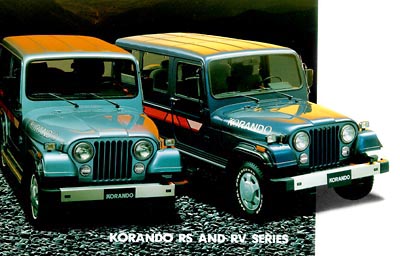 The "RS" series sported trim packages and the "RV" series included a slightly larger 2.5-liter XD3P diesel engine. Both of these upscale models came with stainless steel bumpers (and air conditioning). See a larger version of the photo (100K JPEG).

The rear photo in the brochure shows that the hardtop was available with or without rear door, which was side-opening. It also highlights some of the unique trim details, including side mirrors, lamps and tire cover.

Freewheeling front hubs were standard, as was a five-speed manual transmission and two-speed transfer case. See a body-off photo (80K JPEG) showing the frame and drivetrain. 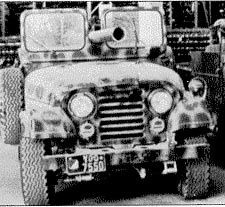 This Keohwa M-5GA2, also built in South Korea, appears to be largely a knock-off of the M38A1 military Jeep. Its grille is carefully rotated, presumably to try and avoid legal problems. I believe Keohwa was absorbed by SsangYong shortly before the debut of the Korando in 1983. 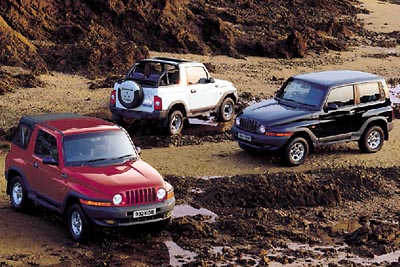 As of 1998, SsangYong Motor became part of Daewoo Motor, and the 2001 Korando line is a newly-designed small sport-utility which nevertheless echoes the Jeep grille design strongly enough that I assume there must still be a licencing arrangement with DaimlerChrysler.

Page 3 of the brochure (100K JPEG) includes a small photo and brief mention of Korando's background in Jeep-building.

Page 4 of the brochure (200K JPEG) describes the new vehicle in terms that clearly identify the design inspiration: "The most recent creation of professor Ken Greenley of Britain's prestigious Royal College of Art, this radically-designed off-roader captures the rugged essence of the grandfather of today's 4x4's -- the American military jeep -- and brings it right up to date with body styling straight out of the 21st century."

Thanks to Pete Pearson, Ian Cilia Pisani and Jarek Skonieczny for photos. Additional information on the Korando story is welcome. -- Derek Redmond

See also more Jeeps Around the World on CJ3B.info.