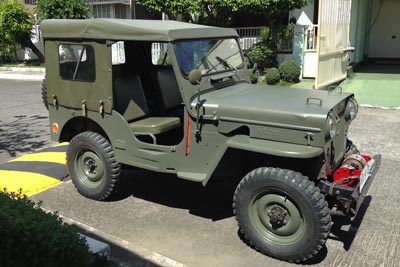 This 1954 Mitsubishi CJ3B-J4 (engine no. JH4-11712 and chassis no. CJ3BA-06591) was restored and photographed in Manila in 2015. It is a good example of how similar the early Mitsubishi Jeeps were to the American-built Willys on which they were based. Distinguishing features of the J4 include the hood cutout, tool indents, windshield vent, headlight guards, steel hood blocks, and Mitsu logo on the grille (but Willys on the hood.) 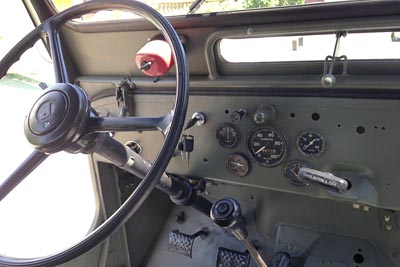 Owner Branden Nala says, "We acquired this Jeep from our trusty mechanic who saved it from rotting out in a barn and restored it from locally available parts. However, given the right budget and time, I'd love to restore it to at least original parts if not period correct all around." 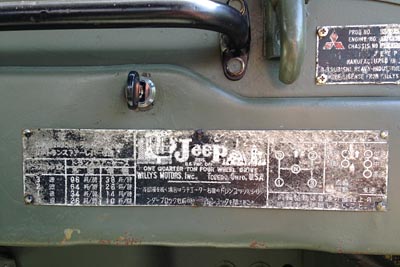 The dashboard has a grab bar, serial number plate, lockable glovebox, and a Japanese version of the Willys Jeep information plate. 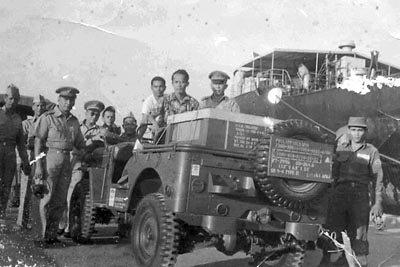 Jerome Chua scanned these photos he inherited from his grandfather, who served as an army Depot Officer in the Philippines in the 1950s and 60's. The pier in the first photo is at Cagayan De Oro, and the Jeep is one of a group of 15 being offloaded in 1961. Its large fuel filler opening and rear-mounted spare and jerry can clearly identify it as a Mitsubishi CJ3B-J4 or J4C military version.

The sign on the back of the Jeep reads:

The label on the box in the Jeep reads: 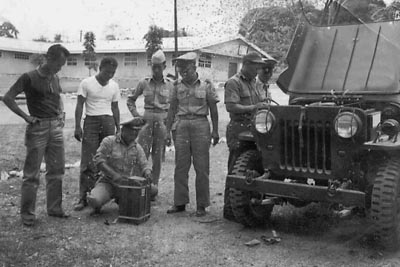 Another photo from the period shows an inspection of a Jeep at Camp Evangelista in the Philippines. The front lifting rings identify it as a CJ3B-J4C. 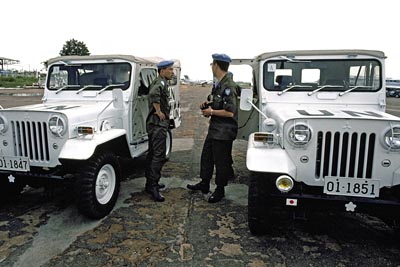 The first foreign deployment of the Self Defense Forces of Japan since the end of World War II, was their participation in the United Nations Transitional Authority in Cambodia (UNTAC) in 1992. This was permitted by new Japanese legislation enacted in June 1992.(1)

Two officers are seen in this U.N. photo as they arrive in Pochentong, Cambodia in September 1992. The SDF apparently decided that if they were going to do it, they would be well-equipped -- brand new Mitsubishi J24A's, with factory white paint for the U.N. mission. 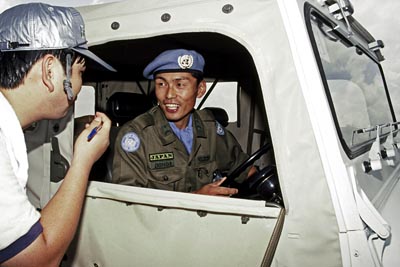 A paratrooper is interviewed in his spotless Jeep in Pochentong, by a Japanese reporter. The government and population of Japan were hesitant about giving the military the authority to act outside the country, but the new legislation responded to strong criticism from the United States and other Western countries when Japan's participation in the 1990 Gulf War was limited to financial support, with no committment of personnel.(2) 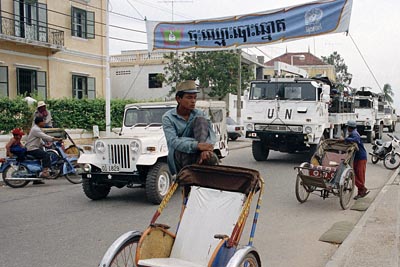 A convoy of Japanese U.N troops arrives in Phnom Penh, Cambodia, under a banner publicizing the upcoming election, to be supervised by UNTAC. Unfortunately the snoozing rickshaw driver blocks our view of the Mitsubishi Jeep, referred to as a "type 73 truck" by the SDF.

The UNTAC mission was to ensure implementation of the agreement settling years of civil war in Cambodia, including elections, civil administration, law and order, refugee settlement and infrastructure.(3)

In this U.N. photo, a Japanese engineering battalion grades a Cambodian highway, and we get a glimpse of a J24A with a khaki canvas top. Maybe that one wasn't white from the factory.

Japan's participation in UNTAC was followed by deployments with other U.N. contingents, in Africa, the Middle East and Haiti. A further step was taken when 600 SDF troops joined the Coalition Forces in Iraq from 2004-2008.(5) 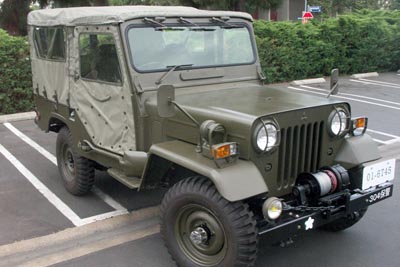 By that time the Japanese SDF had phased out the Jeeps, which were replaced by a new "type 73 truck" known as the Kogata (180K JPEG) and based on the Mitsubishi Montero. From the front, the Kogata still bears a certain resemblance to a Jeep (60K JPEG). Kogata photos courtesy Military-Today.com.(6) 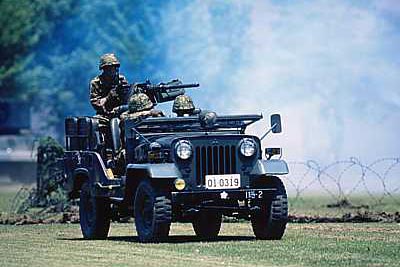 Back in 2001, the Japan Ground Self Defense Force still had lots of Mitsubishi Jeeps in active service, as they had for most of their 50-year history. This photo shows maneuvers during a 2001 base open house. The Jeep mounts a 12.7mm machine gun, and attached to the top of the windshield is a covered rotating beacon light. 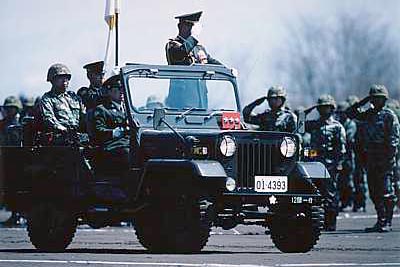 The design of all the Jeeps built under licence by Mitsubishi from 1953-1998 was based largely on the CJ-3B. Here, the base commander reviews troops from a J24A Jeep ("type 73 small truck") at the JGSDF open house. The J24A has a "medium wheelbase" of 2225mm (about 88 inches). Photos by Morimoto, Makoto. 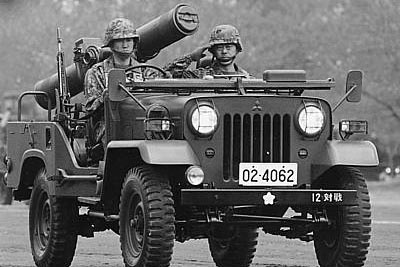 This J24A carries a wire-guided anti-tank missile with a range of 4 km. 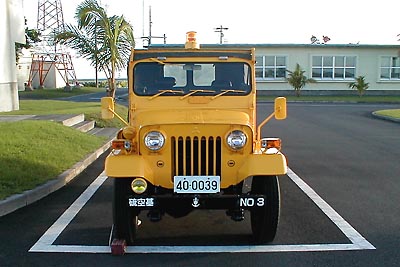 Here's a Mitsubishi type 73, apparently in some kind of emergency response service with the Japanese Navy. Note the number of windshield wipers -- three on the bottom and one on the top.

See also a side view (50K JPEG). These great photos were taken by U.S. Marine SSGT Rick Lopez on the island of Iwo Jima in October 2000. Rick says the Jeep "was zipping all over the island as we were humping towards Mt. Surabachi and Invasion beach." 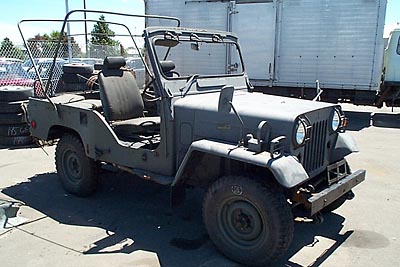 This J24A, apparently surplus from the Japanese Navy, also carries the four windshield wipers, but this time three on top and one on the bottom. These photos were taken by Alasdair Brass in New Zealand in December, 2000.

An interior view (50K JPEG) clears up the mystery of how the four wipers work together. The driver would obviously have to pay close attention, to operate the manual wiper on the bottom without hitting the ones on the top. 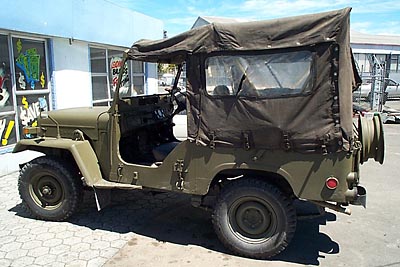 These Jeeps would probably have been built in the late 1970's or early 80's.

Thanks to all the contributors. All photos copyright by the photographers. -- Derek Redmond