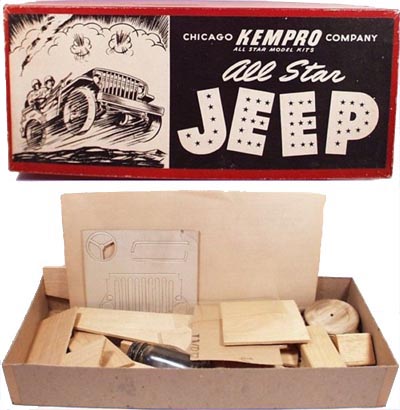 People have been making toy jeeps out of wood almost as long as there have been jeeps. You've probably seen photos of hand-carved versions made by GI's during the war, or by kids in occupied Germany after the war. And there were some quite detailed model kits available even before the end of the war.

I don't have a date for this Kempro kit, but except for its size it is typical of wartime kits. Judging from the size of the box, which measures 14 x 6-1/4 inches (356x159mm) the model appears to be 1:12, or one inch to the foot, which is twice the size of most of these early examples. 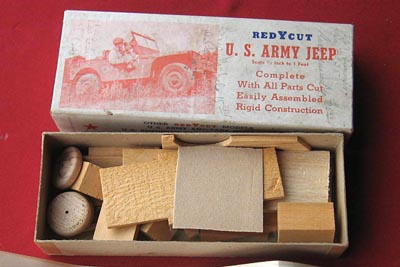 This undated "Redycut" kit is balsa wood, with a scale of 1/2 inch to 1 foot (1:24). See a great photo of the pieces (150K JPEG) including wire axles, metal steering wheel and celluloid for the windshield. Also the full instructions (120K JPEG) including dashboard details. Thanks to eBay seller jrdudeman for the photos. 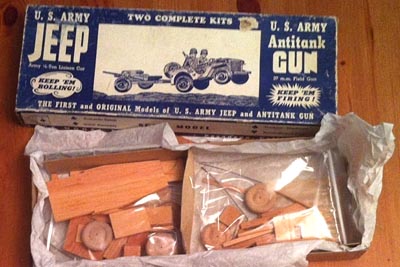 This set from Ace is also in the more popular 1:24 scale. It claims to be "the first and original models of U.S. Army jeep and antitank gun," but the exact date is unknown. The use of the phrase "1/4-ton liaison car" would suggest it is quite early. See the instructions (200K JPEG) for both kits. 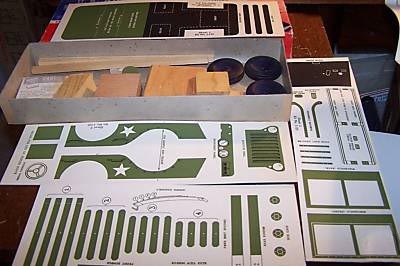 This West-Craft 1:24 kit was also designed with a number of cardboard pieces. See the instructions (70K JPEG).

This "model with the treaded wheels" from Mars Model Industries included a number of cast detail parts such as pioneer tools, gas can, grab irons and shift levers. Those parts, and the fact that the packaging has a photo of the model, suggest that it was a postwar product.

Of course companies were producing models of a whole range of military vehicles, aircraft and ships during the war. See also kits for building an amphibious jeep: Ford GPA Model in Wood.

West-Craft Manufacturing in Chicago pulled out all the stops around the end of the war, and launched its "Super Jeep" with more details and in the larger 1:12 scale. It had full color cover art on the big box, which would help it jump off the shelves of hobby shops. They advertised it for $2.50 (equivalent to about $30 in 2014) and the ad mentioned that the smaller West-Craft jeep was also still available.

Another ad was headlined "West-Craft Jeep Goes Civilian" (60K JPEG) but oddly uses the same photo, with the U.S. Army hood number. Likely the only difference in the kit was the inclusion of different paint. 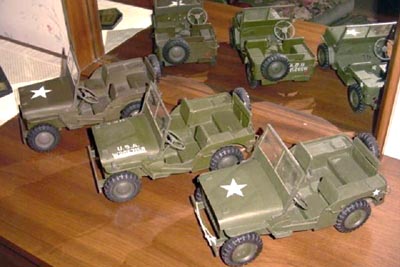 Mark Eaton of Spokane, Washington has a number of assembled Super Jeeps in his collection of World War II wooden models. The material is hardwood with some cardboard pieces, and the wheels are black graphite. 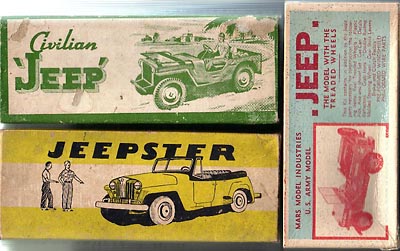 Glenn Byron photographed the boxes from some 1:24 civilian Jeep kits sold in the 1940's. Ace Kit #7R contains a partially-built model of a Jeepster, and is dated 1948. Ace Model #246 is a complete, unbuilt (with instructions) kit for a CJ-2A (with one-piece windshield) dated 1946.

See also the Jeepster built and painted (40K JPEG). The grille detail appears to be a decal. 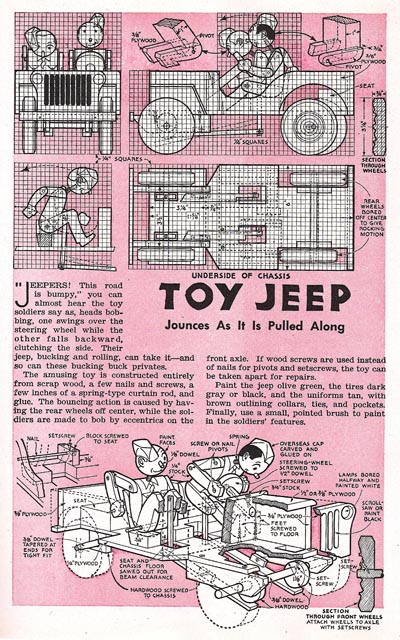 Ken Perry scanned these plans for a wooden jeep pull toy, from the Complete Home Workshop Cyclopedia published in 1945 by Popular Science. Off-center rear wheels produce a bouncing action as the toy is pulled along, and eccentrics connected to the front axle cause the wooden figures to rock forward and back. The top half of the page includes the plan drawings (370K JPEG) and the bottom half includes a cutaway perspective drawing (400K JPEG) of the project.

The advertisement on the left is for a Swedish post-WWII wooden model.

These wooden toys, apparently early, are stamped "Ralstoy" on the bottom (20K JPEG). More information is needed; are they World War II or postwar vintage? 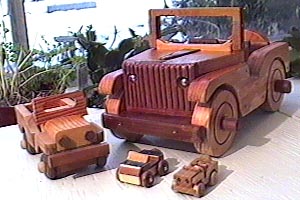 I found that wooden Jeeps were suddenly under the Christmas tree in 1996, in all sizes: Jeeps carved, sawn and routed from a variety of woods. A couple of them looked like they've been around a few years, and a couple of others looked brand new. 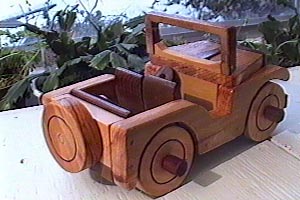 The big one needed a bit of repair, including that task so often required of people who buy toy Jeeps at garage sales and flea markets -- replacing a missing windshield. Just a piece of stiff wire can often do the trick, but not in this case. (And I'm pleased to be able to say that it folds down.)

This Jeep is signed on the bottom by the original woodworker: "L.Ketcheson, Belleville, Ontario." 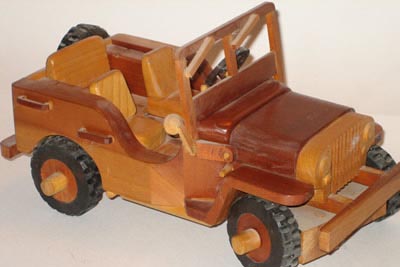 The windshield pivots and the front wheels turn on this 10-inch wooden Jeep built from plans available for $6.95 from Gatto Plan Supply.

If you're not the handy type, a similar finished model handcrafted from walnut and maple, is available for $150.00 from T & D Toys and Replicas near Toledo, Ohio. 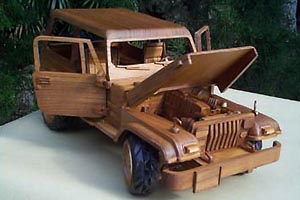 The most elaborate wooden Jeep model I've seen is the YJ Wrangler from Indonesia. See also their Willys MB on the Woodcycle Art website. 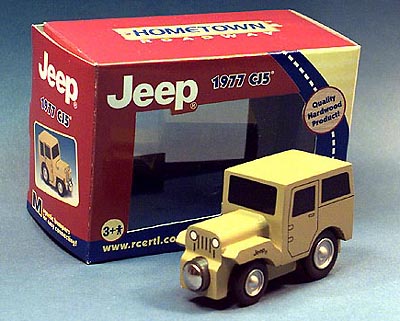 Racing Champions Ertl, who manufactured the short-lived "Hometown Roadway" system, signed a licencing agreement with Chrysler in 2002. One of the first resulting toys was described as a 1977 AMC Jeep. I'm not sure what the significance of 1977 was, except it was the first year for factory air conditioning on CJ's, which fits with the hardtop. Anyway, it's a nicely designed little toy; its magnetic couplers and vaguely steam-engine-like appearance would let it fit in just fine at the head of a BRIO train. Thanks to Dan Fedorko for the photo. 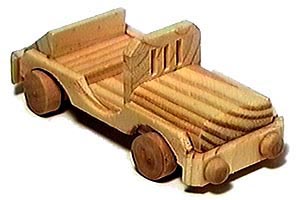 This basic cut-wood toy was made in China. 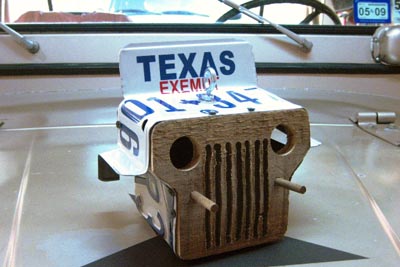 Mark Randall in The Colony, Texas says he's always wanted a CJ-3B but he hasn't found the right one yet. So meanwhile, he came up with this idea for a high-hood birdhouse. Looks like a good use for those old license plates many of us have lying around.

If you like this kind of project, see also Heinz's CJ-3B grille grill for Oktoberfest, and Derek's CJ-3B Jeep-o-lantern for Halloween. 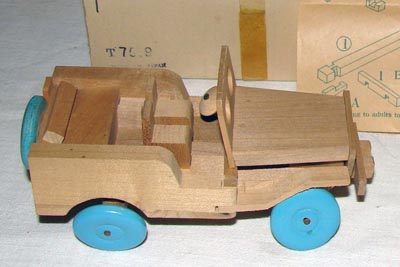 This wooden puzzle was made in Japan, possibly in the 1950s. See the instructions (200K JPEG) which say, "Interesting to adults too!" 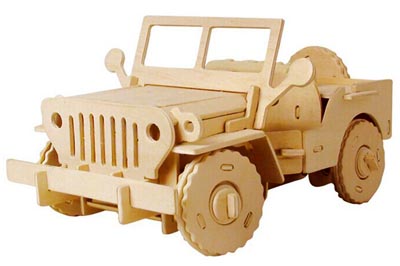 As of 2014 there are a number of "puzzles" of this type (right) available online, basically kits which don't require glue, so they can be assembled and disassembled. This one selling from China for about $30 is apparently electric powered and radio controlled. 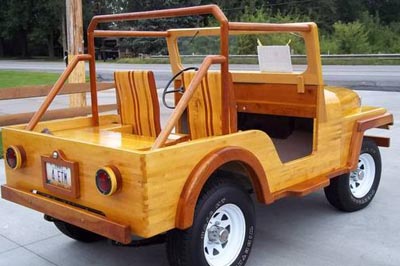 The ultimate wooden Jeep toy! I have seen a few full-sized Jeeps with wooden bodies, but this has to be one of the nicest. The 1960 CJ-5 was advertised online in 2014 from Ohio: "Body is hand built from maple and cherry, 1" thick, glued and screwed every 4 inches. 10 coats of spar varnish. Titled and street legal." See a front view and interior view (40K JPEGs).

I would like to include a credit to the builder and photographer of this one -- anybody know who?