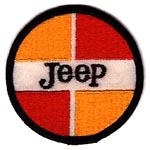 Willys dealerships were using promotional models very early after World War II to help sell their vehicles. Enticing customers into their showrooms and letting kids take home a vehicle dad was considering purchasing, made for good advertising. Just like the image Willys was trying to portray with their 1:1 vehicles, the models were solidly made to withstand years of abuse. The promotional models on this page take over where the first generation Al-Toy and Oglesby models leave off at the end of the 1950s (see Al-Toy Aluminum Toy Jeeps). Unlike those earlier "Tonka sized" models, the second generation models were 1:25 scale. A display of cast aluminum dealer promo models (30K JPEG) at the Spring Willys Reunion in Wausau, Wisconsin in May 2001 shows some of the smaller models in front of the larger Al-Toys.

Jeep dealers were not unique in using promo models, as just about all auto manufacturers had plastic 1:25 versions of their cars in their dealerships by the 1960s.

Comet had already made a name for itself with the wartime production of Authenticast identification models (see World War II Jeep Recognition Models), and although in 1950 it produced a Willys Station Wagon model (30K JPEG), it was the CJ-5 casting that became the most prolific of the second generation dealership models. 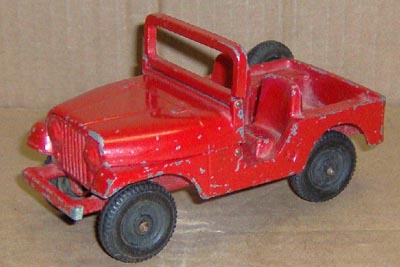 Very similar in overall construction to the larger aluminum models (see one with a larger Oglesby, 40K JPEG), the CJ-5s were very solidly cast in aluminum with rubber wheels on steel axles, and were approximately 6 inches long. 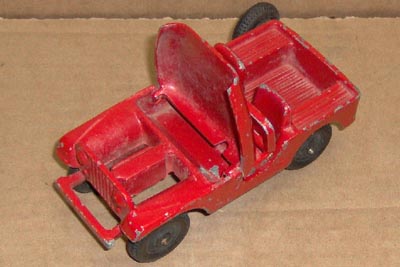 Opening hoods, crude engines and folding windshields were also features of these models. A spare wheel was mounted on the passenger side, and there was a steering wheel which was vulnerable to being broken off. 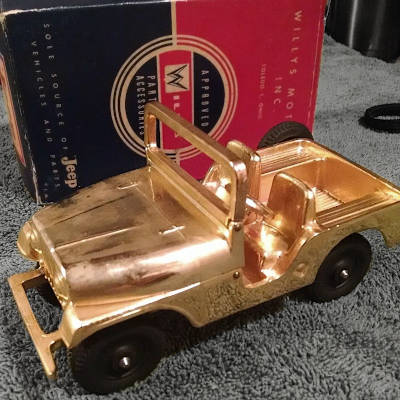 Gold plated versions of these CJ-5s were reportedly given to Jeep plant employees at their retirements. It's not clear what the actual gold finish was. 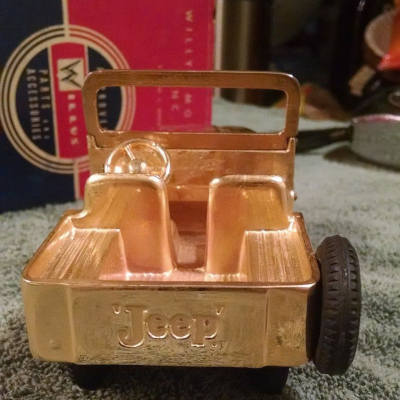 The Jeep name cast on the tailgate of the gold model does not appear on the red version, above.

See also a front view and underside view (200K JPEGs). Thanks to ourfinefinds on eBay for these photos. 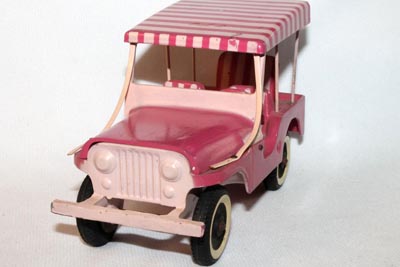 Comet made a DJ-3A Surrey in the correct Tropical Rose/Coral Mist paint, with whitewall tires, a non-folding windshield, and a feature seldom found on toy versions -- the vinyl windshield support straps.

See also a side view with Surrey fringe (40K JPEG). 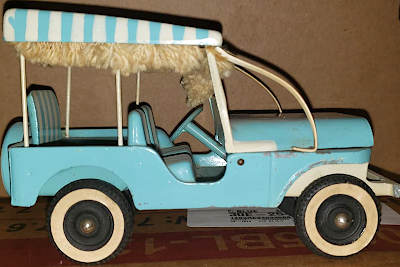 Another facet of the Surrey ignored by most toymakers: the Cerulean Blue version. See also a bottom view (110K JPEG). Thanks to Clint Bochan for the photos.

Comet also made an FC stake mail truck with dual rear wheels and a plow (no stopping the mail). It was based on an actual vehicle used by USPS for snow removal and mail box maintenance (see Postal Jeep Toys.) There was also a single rear wheels version (10K JPEG). 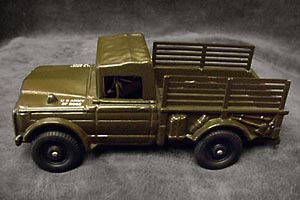 Having the same rubber wheels as the Comet Jeeps, this M715 truck model is identified as made by Banthrico in 1969. Banthrico was a cast coin bank manufacturer that made various coin bank vehicles for dealerships. The lack of a coin slot seems out of character for this manufacturer. The story I have heard is that it was meant to be a promotional item to entice the military into purchasing the vehicles.

Joe Kubat, a former Banthrico employee, confirms that "this truck was a promo truck and intended for that only. The mold was revised in the mid-1970's to have the bottom coin slot, after finding out that people were letting their children play with them and risk getting cut on the sharp edges." (See the underside of the casting, 40K JPEG.) 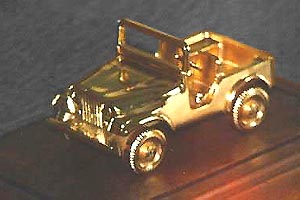 Sometime after Comet stopped producing the CJ-5s, the Toledo Jeep plant produced its own Jeep model casting. Solidly cast, including the wheels, the brass Jeep had a folding windshield. This particular model was photographed at the Jeep House Museum in Toledo. Just like the gold-plated Comets, these CJ-5s were given at retirements and VIP tours of the plant. The dies for this model (15K JPEG) were intentionally destroyed (diagonal cut seen in the photo) prior to Chrysler taking over the plant. 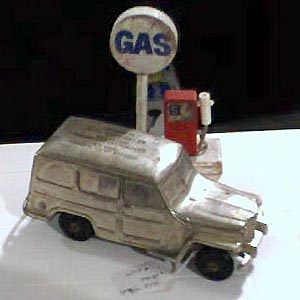 Other promotional items that could be found in the top selling Jeep dealerships were dealer awards given out by Jeep Corporation to their best performers. This 1950 Willys Dealer award is a gold-plated 1950 Wagon. 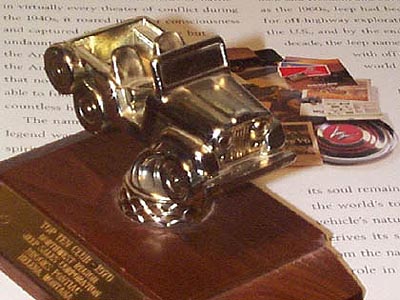 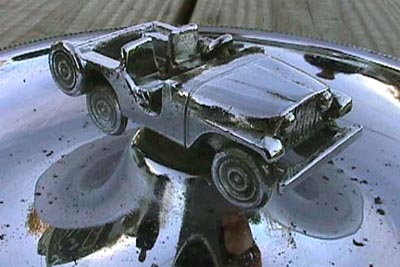 Promotional items were not limited to models, as various ashtrays were also made. One can just imagine how many cigarettes were butted out in ashtrays similar to this one just prior to signing the deal on a brand new Jeep.

Again, although the CJ-5 may have been the most common, there were other versions including this FC-170 ashtray (70K JPEG).


Photo credits: As most of the items on this page are quite rare (and expensive) I make no attempt to claim ownership to all of them. Recent reproduction of Kaiser-era Jeep patch is from my collection. The Wasau collection photo is by Bill Wheeler. The red CJ-5 is from my collection, as is the Oglesby in the comparison picture. The Surrey might have come from an eBay auction (if you recognize it, let me know), the FC truck courtesy of Clarence Young, the single wheels version was on eBay a while back. The Banthrico (which is repainted to appear original) courtesy of Walt Cunnigham, Jeep Plant pictures taken by myself in Toledo, the Jeep ashtray belongs to Bob Keniston, the Willys Wagon was photographed by Mike Boyink at a Kalamazoo toy show (asking price: $625) and the trophy is from my collection, photographed in front of the 1996 Jeep Book (US version of the model brochure) which features photos of various Jeep memorabilia throughout. More info on any of these or other models welcome. -- Jarek Skonieczny

Thanks to Jarek for a very useful article. -- Derek Redmond