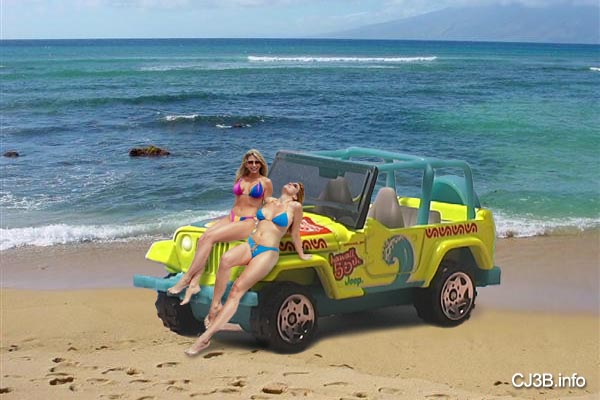 The Wrangler Jeep was chosen to represent both Hawaii (above) and South Dakota (20K JPEG) in the Matchbox 50th Birthday series of vehicles recognizing the 50 United States of America. The Grand Cherokee carried its inflatable boat to the white water of West Virginia (20K JPEG). The vehicles came in special 50th Birthday packaging (70K JPEG) including each state's license plate. 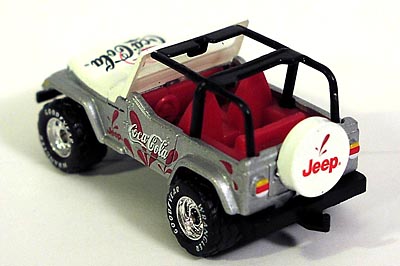 Matchbox also marked the anniversary with a number of other special releases, including a new Coca-Cola merchandising series. See a front view (90K JPEG) of the new Coke Wrangler, and its 50th Birthday Collectibles packaging (70K JPEG).

The green Desert Base Wrangler (80K JPEG) from the World Zoo 5-pack, was more in the tradition of the earth colors Matchbox has primarily used for the TJ since its 1999 debut, as was the blue and black #49 Wrangler (30K JPEG) and the orange and blue Mission H20 Wrangler (20K JPEG). 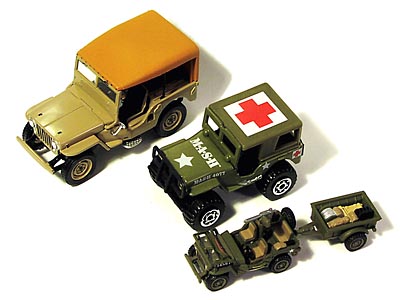 Unfortunately Mattel didn't follow up on last year's facelift of the original Matchbox flatfender casting (see 1960 Jeep Surrey) by releasing any of the new versions I suggested for The CJ3B Page Collection, or any other new versions for that matter.

Instead, the only new flatfender we got this year was a completely new, tiny MB with trailer, referred to on its Collectibles packaging as a "Jeep Willys." It's seen here in Mike Albright's photo with the original flatfender (MASH version) and the 1:32 CJ-2A from the 2000 Collectibles series. See a closeup view of the new Willys (40K JPEG). Nicely done for such a small-scale item, but who needs it? The WWII jeep niche is saturated right now with recent items from Johnny Lightning and several European manufacturers. 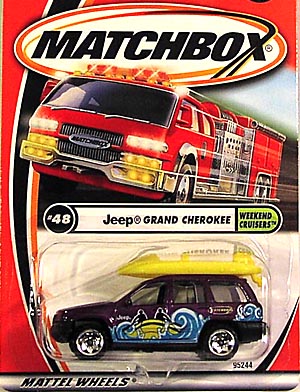 At the other end of the Jeep spectrum, there was the #48 Weekend Cruiser version of the Grand Cherokee in the basic Matchbox 1-75 series this year. As far as Mattel is concerned, the Grand comes standard with a boat stuck on top. There have been only a few exceptions, including the Football WJ (30K JPEG) in the Team Players 5-pack.

Some other Jeep wagons that were released in 2001-02 have appeared already on the Emergency Services Jeep Toys pages: a nice new Fire Chief XJ (80K JPEG), and the Police Liberty (70K JPEG) from the early version of the Mega Heroes 10-Pack. (To confuse things, the Liberty KJ appeared with the same police graphics but red paint, as #71 X-treme Rescue (40K JPEG).

There was also a large 1/18 scale Liberty (30K JPEG) with opening doors and hood, in the Motor Trend Collectibles series. 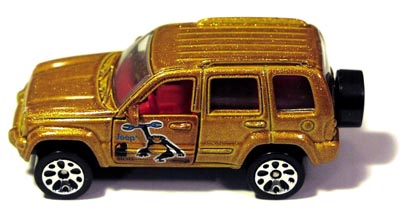 Perhaps the nicest KJ yet, is the "Monkey Wrench" version that appeared late in the year, in the "Road Rescue" 5-pack. The gold metal-flake finish makes for a nice anniversary vehicle.

Quite a few Jeeps from Matchbox in 2002, with nice graphics, but nothing really imaginative. We'll hope for more interesting ideas from Mattel next year.

Thanks to Mike Albright and Toshimi Ohashi for photos for this page. Hawaii TJ photo taken on the desktop beach in Kingston, Ontario. -- Derek Redmond