Although there were some bright spots, the year 2001 was not exactly a banner year for Matchbox Jeep toys. This may be part of a more general decline in the fortunes of Matchbox; one commentator (see below) suggested that "Mattel has put the first nails in the Matchbox coffin."

The high point of the year for Jeep fans certainly had to be the reappearance of the venerable 1/64-scale flatfender in a new and improved form, as the Matchbox 1960 Jeep Surrey, part of the "Elvis Presley Graceland Collection." But a $20 item aimed at adult collectors won't replace the millions of basic $1 toys sold to kids around the world, so we have to hope that this casting will appear again in other versions. (I've already made my suggestion for The CJ3B Page Collection.) 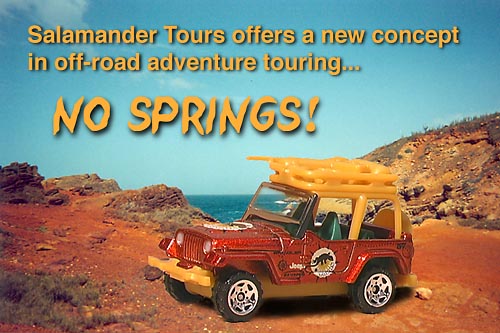 The TJ casting made a couple of appearances this year. The "Salamander Tours" version didn't have much going for it beyond the copper metallic paint. Matchbox saved a few cents per unit by dispensing with the sprung suspension. The yellow chassis and luggage rack scream "plastic," and the fishing rod sticking out of the luggage rack seems designed to break off within the first few hours of play by any real child. Thus only copies kept in the bubble pack by adult collectors will have any value at all. 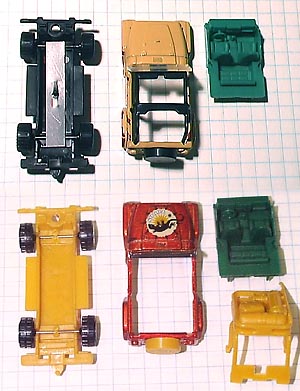 The photo at left shows the single-leaf suspension found on all previous versions of the TJ (above), and the unsprung Salamander (below). Jarek first drew it to the attention of the jeeptoys e-mail list, commenting that "the metal leaf spring is removed and the base holds the axles captive. Metal protrusions from the casting prevent vertical travel on the front axle, while similar protrusions on the seat part prevent rear axle travel."

The other new Matchbox TJ that I noticed this year, is the weathered green one which can be found in bookstores with the Matchbox Safari Jeep Book. It's basically a cross between the original green Forest Rangers TJ and last year's dusty Camp Jeep version.

What Else is New?

A web editorial published earlier this year under the title "Is Matchbox still a 'toy car' maker?" laments the predominance of commercial vehicles and non-automobiles in the current Matchbox lineup. Author Doug Breithaupt comments: "It seems pretty clear that Mattel has decided that Hot Wheels gets to do the cool cars and Matchbox is left with the trucks, planes and boats.... It appears that while Mattel sees a value in the Matchbox name, they have little regard for the true spirit of the matchbox tradition. Matchbox is currently receiving less than half the shelf space provided to Hot Wheels by major retailers. The 2001 Matchbox line is in no position to change this trend.... Do you really want a street sweeper for your collection?"

Maybe the Cherokee is one of those missing "cool cars." Matchbox obviously didn't pay much attention to my Suggested Matchbox Cherokees for 2001. After a bunch of interesting versions over the past decade (see Mike Albright's photo at right), I think the only time it showed up this year was in the "Sea Rescue" set. Find that version in the photo and you can click for a closer view!

See also a larger copy of this photo (100K JPEG), and a photo of the complete Action Launcher Sea Rescue set (120K JPEG). 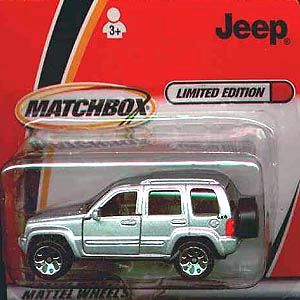 In addition to the Elvis Surrey, and probably some new items in the over-priced larger-scale Collectibles series, collectors were distracted from Matchbox's shaky state by a Limited Edition 2002 Jeep Liberty model. Apparently 5,000 of these were created for a special promotion accompanying Daimler-Chrysler's vehicle introduction, along with a glossy brochure. Perhaps this KJ casting will appear in future regular releases. 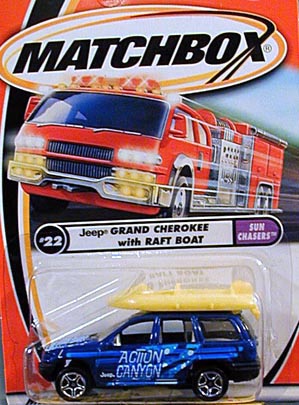 Meanwhile, the Grand Cherokee fared slightly better than the XJ. The inflatable dinghy on the roof made a return appearance with the "Action Canyon" WJ, #22 in the regular 1-75 series. See a larger photo of Number 22 (60K JPEG). The 1/64 Collectibles series included a Fire Department WJ (20K JPEG) with "EMT" graphics which are an improvement on the earlier Flame Chasers version (30K JPEG). But still with no light bar.

Thanks to Jarek Skonieczny and Mike Albright for photos for this page. -- Derek Redmond