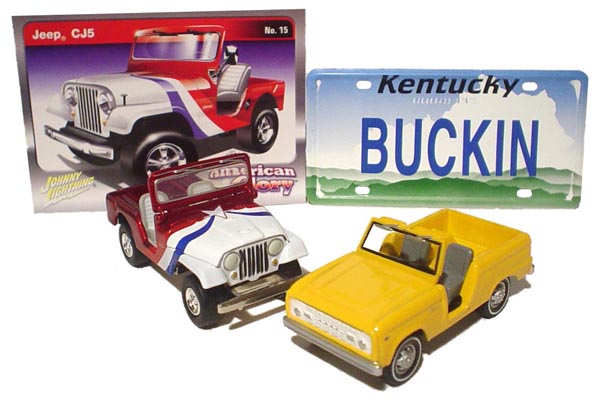 By 1966, the Willys Universal Jeep had been facing competition from the International Harvester Scout for five years. The heavier, underpowered and less rugged Scout was grabbing a good chunk of the market mostly by undercutting the price of the CJ-5 (and even the CJ-3B, which was sold domestically until 1965.)

The Ford Bronco appeared in 1966, and the first of the Big Three automakers to get into the sport-utility markety was clearly gunning for the Jeep's off-road title, with a new frame and suspension design, and a standard inline-6 engine. This 1/4-ton competition continued until 1978, when the Bronco morphed into a larger vehicle to compete with the successful Chevy Blazer, introduced in 1969. 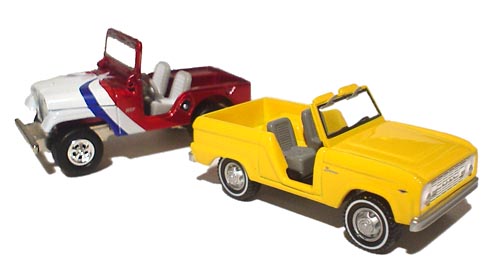 I was reminded of that mid-Sixties confrontation when I stumbled across a clearance bin of Johnny Lightning bubble packs recently. Not only did I find the "American Glory" CJ-5 in two different paint schemes, but also this little 1967 Ford Bronco which I hadn't seen before.

The Jeep is from Johnny Lightning's "Street Freaks" series so it has a custom paint job and aftermarket wheels and tires. The Bronco on the other hand is all stock, part of the "Working Class Trucks & SUVs" series, which packages a replica licence plate with each vehicle. That series did include stock versions of the CJ-5, with and without roll bar, and also some Broncos in other colors. 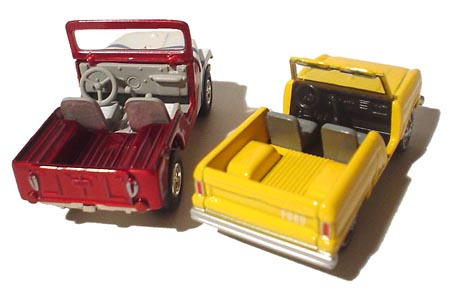 Both the Jeep and Bronco have good detail in their castings, paint and molded plastic; the interior features of the Bronco are harder to see due to the black plastic. What the Bronco lacks is the folding windshield, opening hood and detailed engine of the Jeep.

These Johnny Lightning models have an accuracy that goes beyond what you would expect in a 1/64-scale toy typically selling for $4.00, and I was pleased to find them for $1.00 each. The Jeep is possibly the best CJ toy in this scale since the original Lesney Matchbox CJ-5 in 1967. 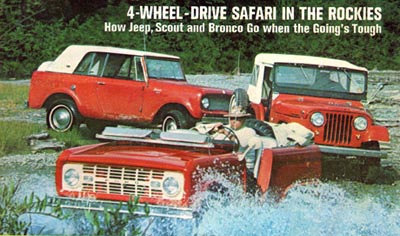 Typical of the PR war that broke out on the release of the Bronco, was the article "Four Wheel Safari Test in the Rugged Rockies" in the May 1967 Popular Mechanics magazine. (See Jeep vs. Scout vs. Bronco on CJ3B.info for the full text of the article.) There were no real complaints about the Jeep, but the Bronco, being brand new, got the most attention. The IH Scout brought up the rear. 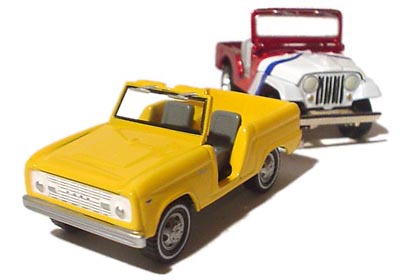 A toy Bronco is not something I would have been shopping for at full price, but I think it's a nice reminder of one chapter of the Jeep story. -- Derek Redmond