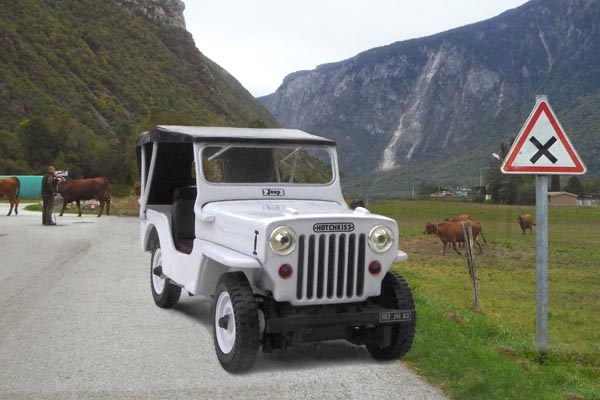 Another 1/43-scale diecast model of a high hood by Ixo Models in China! This one has actually been around since 2013. It was Number 60 in their "French Automobiles of the Past" series, and they call the Jeep a 1960 Hotchkiss JH-102. It's seen here with a background I photographed in Saint-Avre, France.

This Hotchkiss casting from Ixo appears to be a variation of the one used by them for the CJ-3B in the Cars We Love in Colombia series in 2013, and the Diecast CJ-3B Models released in their Premium X and Triple 9 lines in 2015. The size of the headlights on the model means that it should more correctly be identified as a Hotchkiss-Willys JH-101, manufactured between 1955-59. Changes when the JH-102 was introduced in 1960 included smaller headlights.

Willys-Overland first licensed Hothckiss in 1952 to manufacture spare parts for the many war surplus jeeps remaining in France, and later to produce their own version of the Willys MB, known as the M201. Their "Jeep Hotchkiss" JH-101 version of the CJ-3B appeared in 1955, also powered by the old Go-Devil engine from Willys, but with the larger Willys Hurricane 4 optional. (See Jeeps in France on CJ3B.info.) 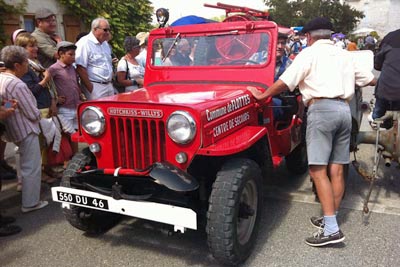 The JH-101 had the standard CJ-3B radiator guard and headlights, as also seen on the Ixo diecast model above. The nameplate above the grille read "Hotchkiss-Willys".

The high hood Jeeps built by Hotchkiss in the 1960s are easily identified by their headlights, smaller than those on the JH-101 and the standard Willys CJ-3B. The change was probably made to accommodate a French supplier of electrical parts. 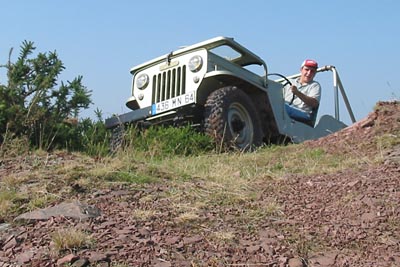 As well as the smaller headlights, the front marker lights were moved slightly wider apart, outboard of the center line of the headlights, rather than slightly inboard of center as seen on the diecast model above. Possibly this was done to better comply with French regulations. The Willys name was dropped from the nameplate above the front grille. 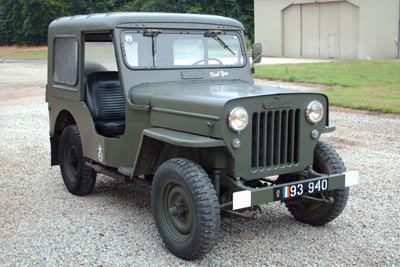 This JH-102 belonged to the Gendarmerie, the French national police. (See also a rear view, 100K JPEG.) Hotchkiss sold less than 1,200 JH-102's, and many of them went to government agencies because the price was high for the average citizen, and there were still many war surplus jeeps on the market.

There was also a diesel JH-102D, and a long-wheelbase version known as the HWL or "Hotchkiss Willys Long" (180K JPEG). But the largest part of Hotchkiss Jeep production was 27,000 of their M201 Jeeps, mostly for the French Army. (See Jeeps in France on CJ3B.info.) 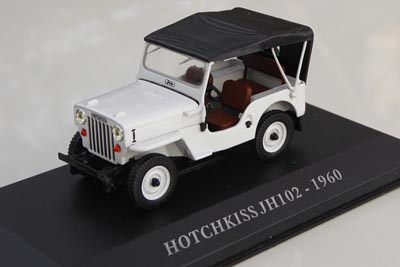 So although the Ixo model has "JH-102 1960" on its base, and the "Hotchkiss" name on the front, the body style means it should have been labelled as a Hotchkiss-Willys JH-101.

Aside from that error, it's a well-detailed little model, which as of late 2016 can be found on eBay for about $30. 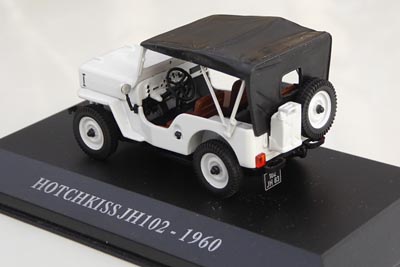 There are a few minor differences in the casting compared to its use in the Cars We Love in Colombia series and the 2015 Diecast CJ-3B Models. For some reason the hood latches were not on this casting and are stamped on in black.

The spare tire is correctly moved to the rear -- Hotchkiss used a swing-away tire carrier -- and Ixo has added a jerry can. The dash layout is the early Willys five-gauge layout used on the JH-101, rather than the two larger gauges of the JH-102. The square taillights would actually be correct only for a later, mid-60's JH-102. 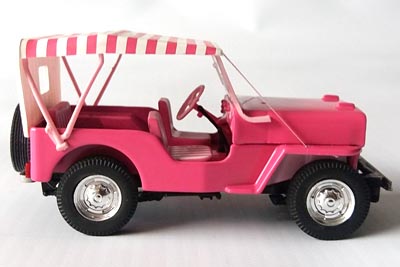 The same casting appears to be getting more use in a 2016 Jeep series available in Peru. The nit-picking between a Hotchkiss JH-101 and JH-102 is nothing in comparison to Ixo's marketing of this CJ-3B model as a "Willys DJ-3A Surrey." However, now that we know that there have actually been a few High Hood Surreys, this is another model that could display quite nicely -- with some tape over the caption on its base.

(See a 2018 update on the complete Diecast Jeep Colección for Latin America.) 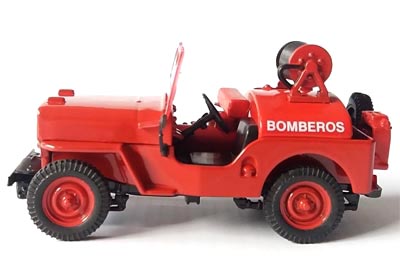 Another welcome variation in the Latin American series is this Willys Bomberos Jeep -- the first ever scale model of a CJ-3B fire engine. It will be interesting to find out what, if any, actual prototype is being modelled here. 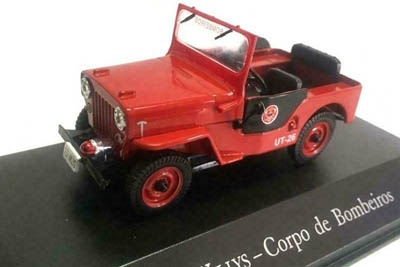 As of 2018, somebody apparently decided a new version was needed for the Brazilian market, to put the "i" in "Bombeiros". Instead of changing the lettering on the tank, they came up with a variation on the basic CJ-3B, with half doors and a siren added. 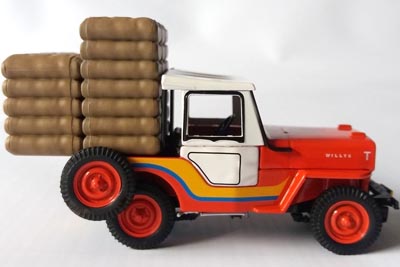 It never rains but it pours! Just announced in the 2016 Jeep series from Peru, is a Yipao CJ-3B representing the Zona Cafetero in Colombia. With its white halfcab and a load of coffee beans, this is the biggest variation yet on the basic 1/43 CJ-3B casting. 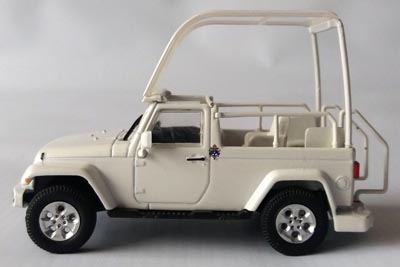 And since I have documented Jeep Popemobiles extensively on CJ3B.info, I will mention that a Wrangler Popemobile has also been announced for December 2016 in the Peruvian series. Perhaps surprisingly for a South American release, this is the Wrangler Pope Francis used in the U.S. rather than the first one in Ecuador.

Of course it would also be a great idea for Ixo to make use of their CJ-3B for a model of the First Popemobile.

See an update on the complete Diecast Jeep Colección for Latin America on CJ3B.info.

Thanks to Jean-Francois Lavie for finding the Hotchkiss model. The HWL photo is courtesy of the Masseiker Oldtimer Club. -- Derek Redmond