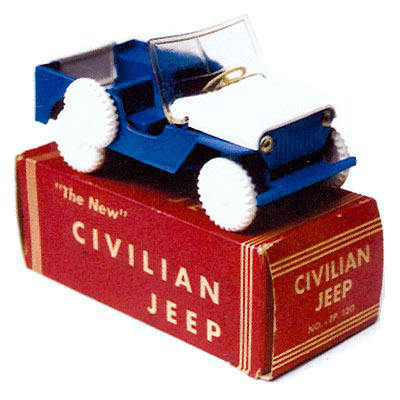 This photo from Fred Coldwell's new book Preproduction Civilian Jeeps shows probably the only toy based on the CJ-2 Civilian Jeep. The total number of CJ-2 Jeeps built for testing in 1944-45 is unknown, but serial numbers as high as CJ2-37 are known to exist. They were the first Jeeps built from the ground up for civilian use, as opposed to the CJ-1 which was a modified Willys MB.

The spare tire mounted behind the passenger-side door on this toy indicates that it was in fact based on one of the first 15 or so CJ-2's, referred to by Coldwell as the "pilot models" and also known as Agrijeeps. The blue/white paint scheme is fanciful, since the actual CJ-2 pilot models were all painted in the same military olive drab as the original CJ-1 Agrijeep. Other features distinguishing it from the military MB include an opening tailgate and a rear drawbar.

The blue/white CJ-2 and a version molded in blue/yellow, were made of a soft plastic which has dried out and curled slightly; note the windshield and hood in the photo. 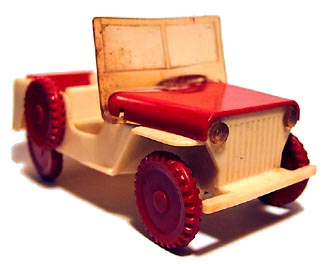 Mike Albright has a similar version in tan/red (photo on right).

There are also examples made of a slightly thinner, harder plastic which has remained straighter. They include red/white and cream/red color schemes; they have wheels with no tread, although the wheels on the versions seen here have NDT tread tires.

The exact date of the toy, manufactured by California Moulders of Los Angeles, is unknown. It is identified on the box as "The New" Civilian Jeep, but Coldwell guesses that the design was actually based on post-war CJ-2A sales literature which included older photos showing the CJ-2.

Ilkka Majantie in Finland has one of the toys, with documents showing it was sent from the U.S. in January 1947.

All of the CJ-2 toys have clear plastic windshields and headlights. The toys themselves have no identifying marks; the model number "EP 120" is listed only on the box. 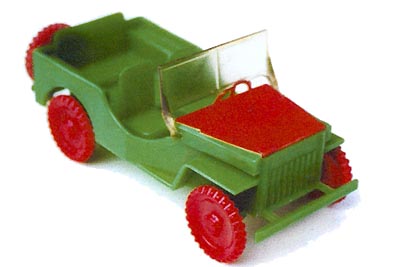 Fred Coldwell has several other similar toys which also appear to be made by California Moulders. This green/red jeep seems to be based on a Willys MA prestandardized military jeep, with its round door openings, rear-mounted spare, and headlights outside the hood. 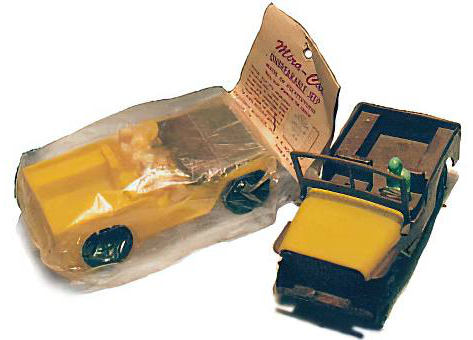 Yellow and brown California Moulders toys owned by Gary Keating reveal that some came in plastic bag packaging under the name "Mira-Cal Unbreakable Jeep." Some also came with a windshield frame in colored rather than transparent plastic. These appear to be slightly later models based on the CJ-2A, with black rubber wheels and plastic figures in the front seats. Coldwell shows similar toys in red and yellow in his book. 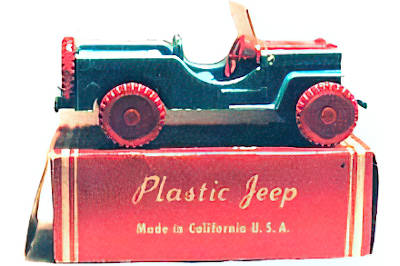 A blue example from Keating's collection is similar to Coldwell's green MA above, but is more obviously military, with a star molded on the hood and rear fenders, plus a shovel and axe on the sides.

It's very interesting that a toy manufacturer at such an early date would be producing a series of toys with different details, based on different Willys models.

Thanks to Gary Keating and Mike Albright, and to Fred Coldwell for the photos reproduced by permission from his book Preproduction Civilian Jeeps: 1944-45 Models CJ-1 and CJ-2, published by Vintimage, Inc. (vintimage@qwest.net). -- Derek Redmond