On the Trail of Jeep History, Part 3

After reading about Derek's Father's Day weekend 2000 pilgrimage, and that he didn't have a chance to finish the final leg (following the route taken by Karl Probst and Harold Crist on 23 September 1940 as they drove the Bantam pilot model to the Army's testing location at Camp Holabird), it inspired me to go down there myself. I have always wanted to look around where the Jeeps were tested. My girlfriend used to work at Holabird and when I told her about Derek's trek, she offered to give me the grand tour. 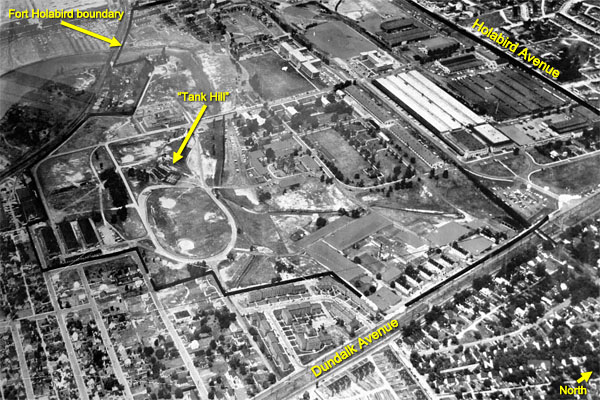 The destination for this part of the trail was the Dundalk area of Baltimore, Maryland, southeast of the City of Baltimore. There are three roads that framed Camp Holabird (later Fort Holabird), most of which is seen in this undated aerial photo (400K JPEG). Holabird Ave. is on the north, Dundalk Ave. on the east, and Broening Hwy. on the west. 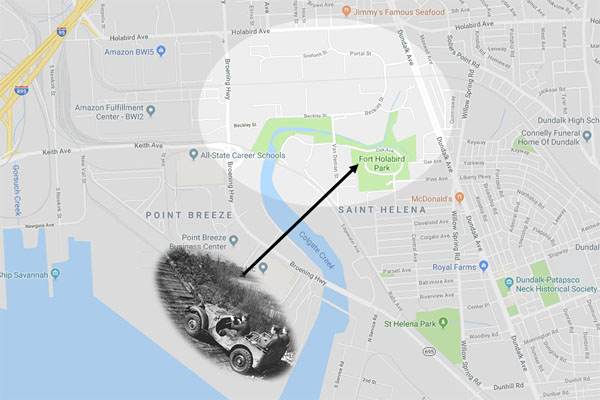 There isn't a whole lot to see at Holabird anymore (in fact if I didn't know it was once an Army base, I would have never known it wasn't always an industrial park). The major exception is that "Tank Hill" with the three different grades of hills where the vehicles were tested, still survives.

This photo looks south at the intersection of Dundalk Ave. and Holabird Ave. at the northeast corner of Camp Holabird. The Bantam pilot model would have traveled through this intersection on its way to the main entrance of the base.

If you followed Dundalk Ave. further south you would run into the railroad line that used to service the base. In the 1940 time frame it would have been an "at-grade" crossing, but was later changed to the bridge visible in the background of the photo. 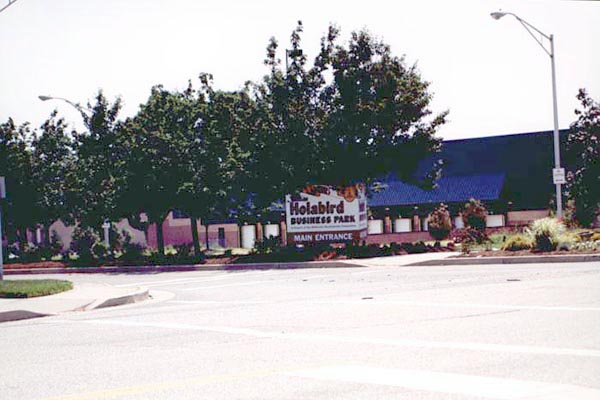 If you turn right on to Holabird Ave. and head west, you will see a sign on the left that says "Holabird Business Park". This is the old main gain of Camp Holabird, but the guard building and gates have been torn down -- Holabird was closed down as an Army base in the 1970's.

While a few Department of Defense agencies remained there up until the mid-1990's, the bulk of the base was sold to the city of Baltimore. The city bulldozed nearly every one of the buildings to build the industrial park. 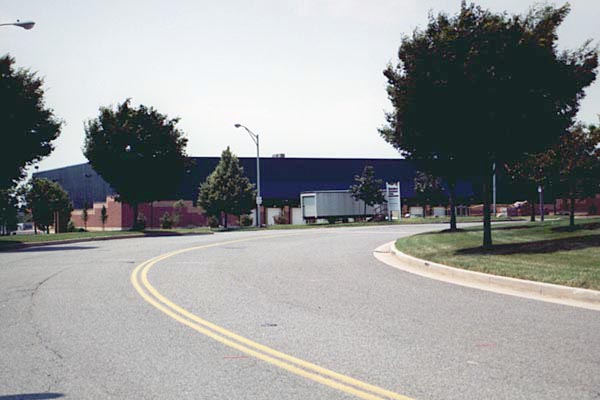 The former site of the main HQ building is now home to the industrial structure seen here.

The Guilford Pharmaceuticals building (50K JPEG) is also typical of of the type of building that has replaced what used to be Camp Holabird. 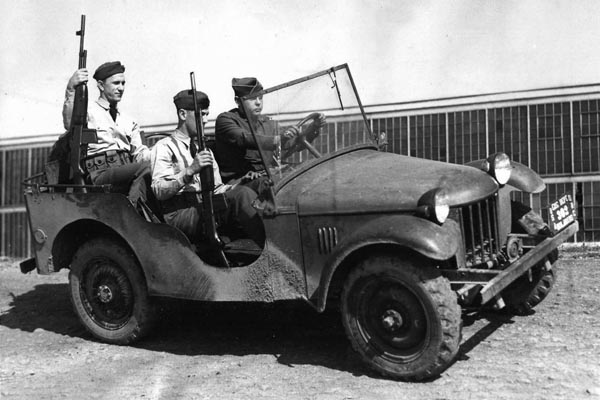 If you look at any of the old test photos such as the Bantam pilot model photos taken at Holabird, the large glass-windowed garages, now torn down, will always be in the background. 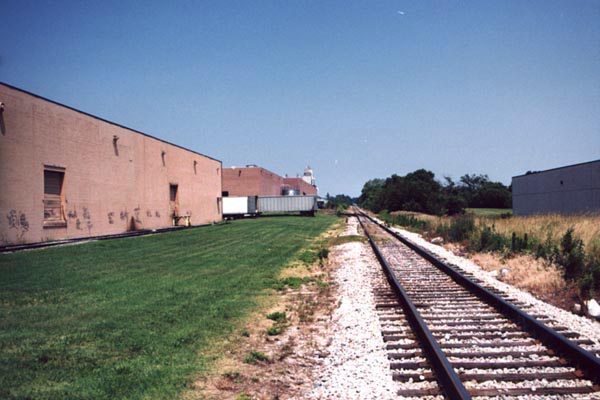 This is where I think those Motor Transport garages used to be, next to the rail spur.

The smokestacks of the Lever Brothers plant (40K JPEG) across the street on Holabird Ave can also be seen in the background of some of the Quartermaster photos taken in the 1940's. This plant is diagonal from the northwest corner of the base.

Nearby is the GM assembly plant (40K JPEG) on the other side of Broening Hwy., which dates back to the 1930's and is now making Chevrolet Astros. (The parking lot in the photo is former Army property). 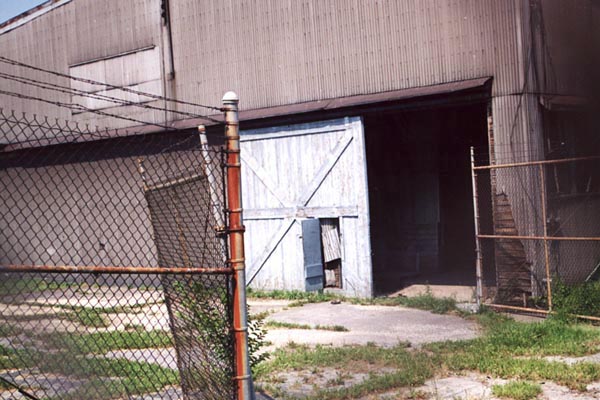 This warehouse (see a wider photo, 60K JPEG) is one of the few remaining original buildings. This building, and two parallel warehouses in pretty poor shape, are scheduled to be demolished. If you look at the door of this warehouse, it is that same exact style as you see in the Bantam pilot model photo. (The garages being 2 stories have a double door.)

Another one of the original buildings left on Holabird is the old officer's club (50K JPEG), now a VFW building. 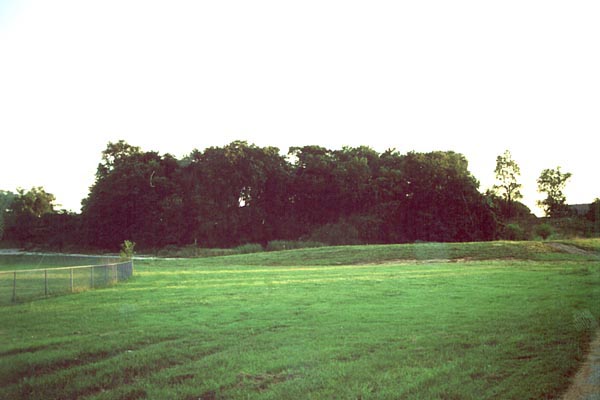 The vehicle testing course at Holabird has almost been destroyed, with a recreation park (along with some of the industrial park) now in its place. But one jewel remains in a hidden state: it's what the locals call "Tank Hill" (I'm not sure if this is what the Army called it). This was a hill that had three different grades. Vehicles would be tested by driving them up these slopes. Herbert Rifkind in his book on Jeep development described these hills.

When my girlfriend told me this was "Tank Hill" I didn't believe it at first. From the outside, it just looks like a clump of trees. But when you look closely and walk into the trees you see the tracks built with concrete. The rightmost track is a fairly low grade, the middle grade is steeper, and the leftmost grade is VERY steep. 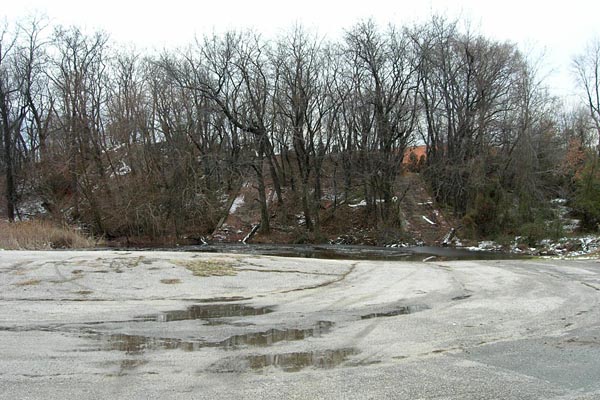 In 2007, Paul O'Sullivan sent this photo (200K JPEG) taken with the leaves off the trees so you can see the three grades. He commented, "With some detective work with Google Earth I too had to check out Tank Hill. And this time I was driving a '99 Jeep Wrangler to it! Unfortunately there was a lot of debris and some very deep water at the bottom of the hill or I too would have driven up at least the low one, and probably the middle grade one. How anyone went up the steep grade is beyond me." 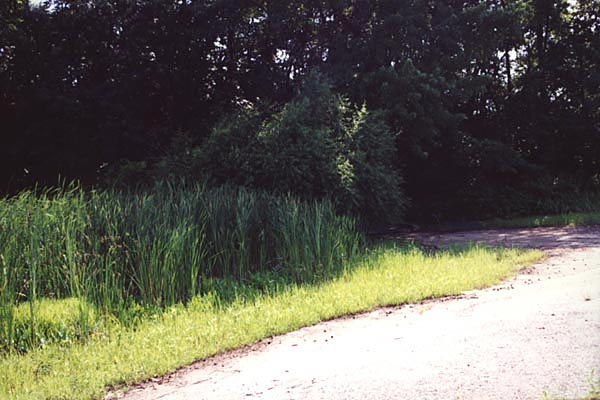 This is the bottom of the hill, where there is a swampy area which looks like it may be the area where the Bantam pilot model was photographed in a swamp (70K JPEG). The swampy area now completely blocks the appoach to the steepest grade. 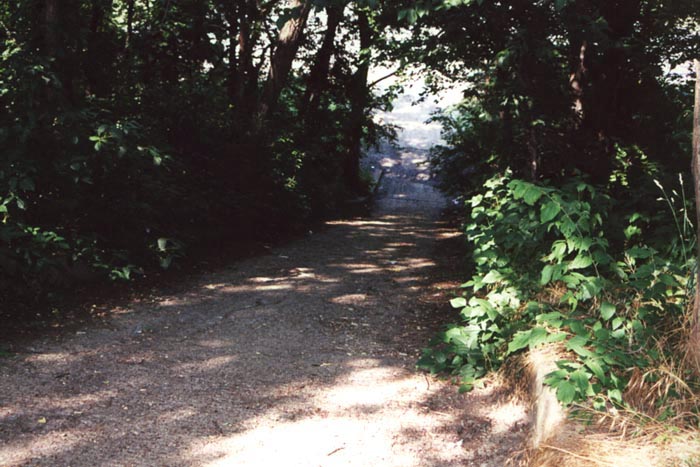 The lowest grade hill is starting to get overgrown. Photographing is very hard since you can't get an angle where you can see most of the hill because of the trees and brush that have overgrown the track. See a photo of the top of the hill (100K JPEG), as you would be seeing it while you were driving the Bantam pilot model during its test! 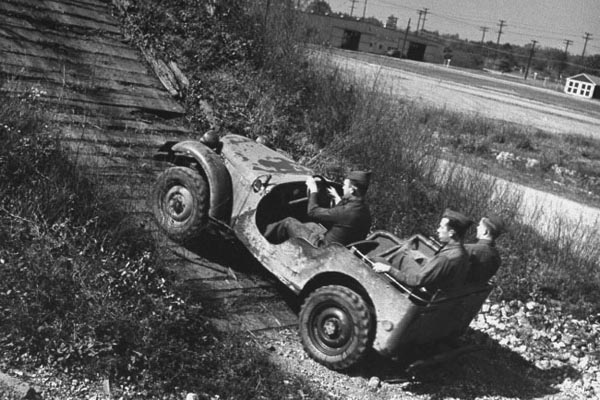 This is a picture of the Bantam pilot model at the bottom of the medium grade hill in 1940. 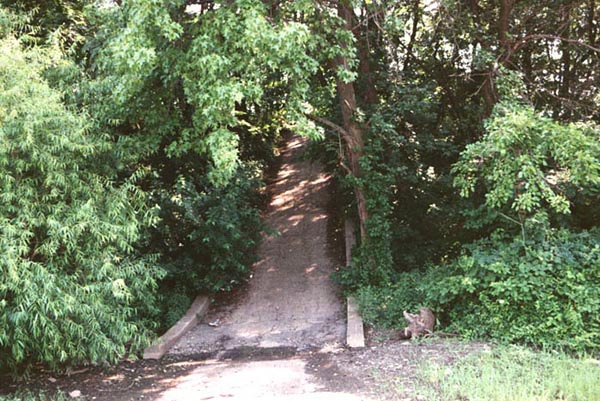 This is the medium grade hill today; the exact hill you see in the 1940 photo. See also what the people in the photo were looking at while they were climbing the hill (90K JPEG).

I tried driving up this hill with my Chevrolet Monte Carlo and it is pretty steep. (Had to do it to say I actually drove on the hill!) Moss and mud causing my tires to lose traction stopped me from getting to the top. 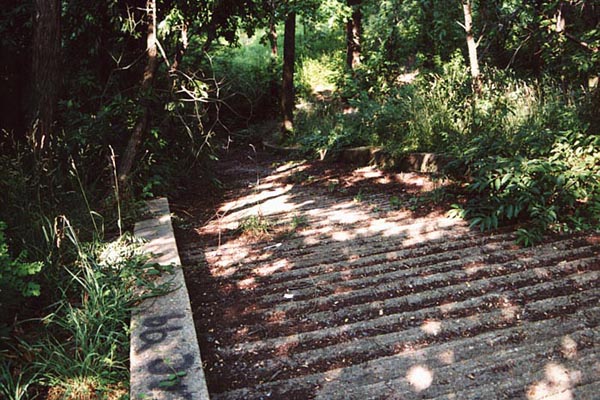 This is the steepest hill. I couldn't take a photo of all of this hill since it was overgrown with trees at the bottom and there was a swamp in front of the trees. The hill is very steep and even walking up it is very hard.

When they poured the concrete, they left horizontal strips every few inches which were used for holding different types of material for testing (such as gravel, mud, etc.), to simulate different conditions. Even in its overgrown state it is pretty impressive to think that vehicles actually climbed this hill. 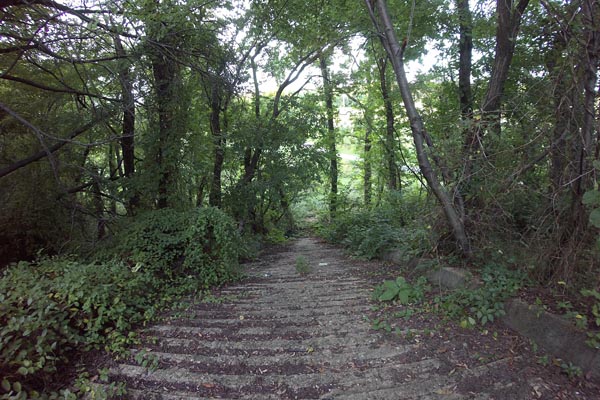 The vegetation was a bit more open when this photo, which can be enlarged (420K JPEG), was taken at the steepest hill in 2016.

(Note: I misplaced the rest of the message from this photographer, whom I would like to credit. -- Derek)


At the top of the third hill, embedded in the center of the track, is a large iron ring (40K JPEG). Based on the steepness of the hill, I'm sure this ring was used often!

On both sides at the top of each hill, there are railroad rails (80K JPEG) driven deep into the ground and embedded in concrete, with iron rings installed at the top. They were probably used to help winch up stuck vehicles. There are also concrete ruts on each side of the tracks (70K JPEG). I would imagine they were drainage ditches?

As you can see, other than the 3 graded hills, sadly, not much of Camp Holabird at the time the jeeps were being tested survives. The DOD agency I work at was originally based at Holabird, and it was great fun tracking down some of the older people at work and getting their recollections of Holabird. I am now researching and collecting more information. If anyone has any information, photos, items, etc. from Camp/Fort Holabird, I would love to hear from you.

Thanks to Todd for completing the trip for us. -- Derek Redmond

Return to On the Trail of Jeep History, Part 1: Toledo, Ohio.