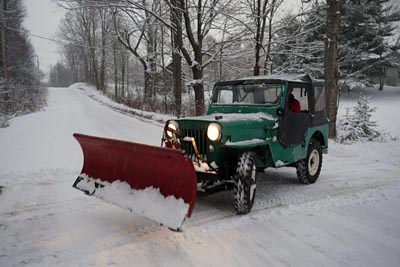 Scott Blystone asked on the CJ-3B Bulletin Board for comments: "To you northern climate folks; it was 10 below here when I plowed this A.M. The Jeep started (slowly), but needed 5-10 minutes of running before I could feed it gas without stalling. Gas has dry gas added, tank was full. It ran mostly OK, with maybe 15% reduced power and needed the choke left on. After 20 minutes of plowing, started smelling melting plastic -- not sure what that was and did not investigate as I was well chilled by then. I had plowed enough to get out so I garaged it.

"I was wondering what the consensus is on block heaters, where to put them, who makes a good one that will not cause a barn fire, etc. Also, who puts a thin oil in for winter? I am running 10W-30. Any suggestions for improved cold weather operation would be appreciated. It's only supposed to get colder here in Syracuse."

Ernie responded: "You can get a heater that installs into the lower radiator hose very easily, from NAPA. Or get a glue-on pad (hi-temp silicone) for the side of the oil pan (don't know if NAPA has these.) Good luck.

Bruce W: "I think NAPA has a magnetic heater for the oil pan, but I think I'd rather heat the coolant. The old style 'tank' heater that goes between the block drain and heater hose should work well, and room should not be a problem. If your Jeep has no cab heater then just connect the hose from the top of the heater to a nipple in the hole in the head where the heater hose would go."

Ed: "Ernie has a good idea; the rad hose heater hooks up in 5 minutes. Also, as it heats it circulates the warm water through the block. I have used one for years on my vehicle. The downfall is you have to replace the lower hose in about 4 years. I like the odds."

Steve: "A block heater and/or an antifreeze heater will help in keeping the engine in a state that willl allow it to start. Period. Another consideration is that once it starts, it needs to be able to come up to operating temperature to run properly. An engine that cannot come up to at least 160 degrees F is going to make poor power, foul the sparkplugs, and generally make you an unhappy Jeep owner.

"I would watch the temp guage as well as the oil pressure guage, and if the engine temp isn't in 160-190 degree range after a few minutes, then you could try blocking part or all of the airflow through the radiator with a piece of cardboard put directly in front of the rad core (not in front of the grille shell.) Adjust the size of the cardboard as needed to attain a normal running temp. This is why you will see large trucks with a winter front cover on the grille in cold temps. They usually have an arrangement of snaps or a zipper to adjust the amount of airflow across the rad core.

"Once you find the magic combination, the Jeep will run like normal, and life will be good again. Just keep an eye on that temp guage!"

Scott: "I think Steve and Bruce hit the nail. I watched this time (-2 degrees F). Engine went to 160, then 210, then back to about 125 after thermostat opened. Last time I had only checked to make sure the thermostat opened so it did not overheat. I will get some cardboard out for the radiator.

"Still having problems with starting though. It runs for about 1-2 seconds with each turn of key. I think the Solex just lets in too much cold air. After about 20 minutes of start/stop, the engine compartment had heated a bit and I was able to keep it running, albeit with idle screw turned in a ways and the choke on. I guess it needs a preheater on the air intake or something."

Wes K: "I can only say that 20 years in northern Wisconsin with a CJ-3B and CJ-5 the Carter carb has never given me the pains I hear from the Solex owners, and a freeze plug heater has lasted 20 years. She always starts after many days of cold soaking without the heater down to 10 degrees F. Below that I try to plug her in. Yes, she needs the choke for a minute or two, and below 10 F I block the radiator air flow. The best ingredient for cold weather ops is a thorough fall tuneup."

Storing Your Jeep for the Winter 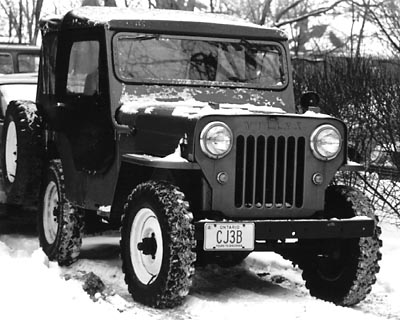 Jon Paulsen: "I put a few squirts of motor oil in the spark plug holes and turn theengine over by hand before replacing the plugs. When it comes time to runit, it would be a good idea to prime the oil pump and spray WD40 in thecylinders.

"Thoroughly draining the coolant will prevent freezing, but not preventcorrosion. Might be best to just make sure the coolant is in good condition.

"Tranny, transfer case and differentials might benefit from temporarilyoverfilling them, to prevent rust on the parts that are not normallysubmerged. Just remember to lower the levels before use. Instead ofoverfilling, rolling it around might help some -- you probably won't have aproblem anyway. A thick coat of grease on the exposed surfaces of thesteering knuckle spheres will prevent rust. If the spheres get pitted, theywon't seal well."

Thanks to Jon Paulsen and the other contributors. Further comments welcome. -- Derek Redmond