or Driving Between a Rock and a Hard Place

Although most U.S. military Jeeps were built with rear-mounted spare tires to maximize side clearance, the only early civilian Jeep to come standard from the factory with a rear-mounted spare was the DJ-3A, referred to as the Dispatcher (80K JPEG) or the Surrey Gala (50K JPEG). Some models of this two-wheel-drive predecessor of the post office Jeep came with no tailgate, and on these models a rear spare tire mount was installed as standard equipment. No tailgated models of the DJ-3A had this as standard equipment.
Over the years many CJ owners have simply removed their spare tire mount from the factory location on the body side and installed it on the tailgate. These tailgates are often warped out of shape around the boltholes. 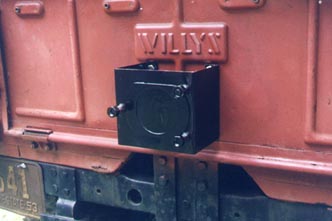 Mine was a good example of a badly installed tailgate mount that stretched the metal around the bolt holes. The strain where the bracket is secured by bolts is too much for the sheet metal and is bound eventually to distort the tailgate. The mount is located low so as not to have to deal with the WILLYS stamping. Clearly in this case the tailgate could not be opened because of the position of the tire, but the un-reinforced tailgate allowed the sheet metal to be damaged.

See also damage to a tailgate (20K JPEG) caused by a poorly thought out, unreinforced spare tire mount on a CJ-2A bought by Rusty Bryce.

Some people have wondered whether Willys ever offered a tailgate spare tire mounting kit for ordinary CJs. They did, and it was inexpensive. A spare tire tailgate mounting kit was offered for Willys models CJ-2A through CJ-5.

Service Bulletin 48-27, found by Bill Norris, is dated 25 May, 1948 and states: "The spare tire mounting on the Model CJ-2A was changed from the right to the left side to comply with the law in a few states. This change became effective with vehicle No. 176061 on March 3, 1948, with some exceptions. This change was not advantageous causing too much concentration of weight on the left side of the vehicle (off-set engine, steering gear, fuel tank and driver) causing it to set low so the right hand mounting was readopted beginning with Serial No. 185769 on April 14, 1948, with certain exceptions. A spare wheel mounting kit in now available under Part No. 670504 to mount the wheel on the tail gate in States where this is required."

The purpose of the kit was to reinforce the tailgate so that it would not be distorted by the weight of the spare tire. This drawing shows the appropriate position of the spare tire mount; note the position of the lugs. Although the instructions state that the mount is to be centered (left to right) on the tailgate, Gary Keating has pointed out that there is no reason that it couldn't be located off center as on military jeeps. 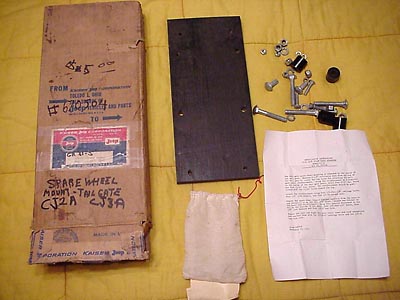 Through Jeep forum inquires, two complete unused kits were located, one owned by Gary Keating and the other by Bob Westerman. This photo shows the simplicity of the tailgate mount hardware. The hardwood backing board is in this case painted with a dark sealer preservative. (See a larger copy of the photo, 70K JPEG.) Note: Bob Westerman's kit was packed with a 1963 page of the Toledo Blade Newspaper as stuffing.

With the documentation from these kits, anyone can construct an inexpensive tailgate spare tire mount with factory accuracy. The only thing necessary is about twenty-five dollars and the standard spare tire mount from the side of your Jeep. 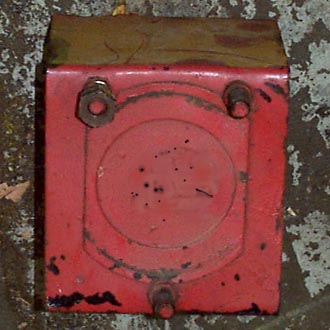 This 1953 CJ-3B spare tire mount is the type normally mounted on the body side, from the earliest CJ-2A through the CJ-3B. 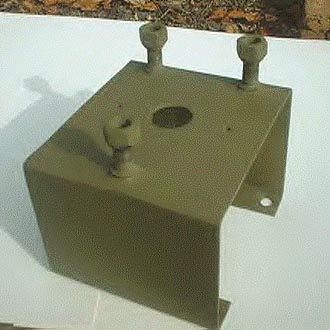 This late-1960s mount is from a CJ-5; note the lack of reinforcement on the face plate. Kaiser Jeep cut a hole in the center of the mount in the 1960s, for the installation of a reflector or passenger side rear marker light. By 1969 CJ-5s had marker lights on front and rear sides as was required by law. Since the side-mounted spare tire took up the whole rear section, the only logical place for the light was on the spare tire mount.

By 1971 the CJ-5 was offered with either a tailgate or a solid rear end on which the spare tire mount could be bolted directly to the rear. Many other CJ-5s had their spares mounted on hinged rear mounts. This narrowed the CJ-5s rear silhouette, making it safer and more capable of squeezing through difficult terrain of rocks and hard places. By 1973 side mounted spare tires were no longer seen.

Building and installing a tailgate spare tire mount should be one of the easier projects a civilian Jeep owner can undertake, requiring only basic hand tools, an electric drill and two drill bits. The total cost for the project should be roughly $25.00.

The Willys kit uses an oak reinforcing board, attached to the inside of the tailgate with four bolts. Its function is to spread the strain of the tire and mount over a larger area of the tailgate. The four bolts of the mount go right through the tailgate and the board and are secured with washers and nuts to the board. Altogether eight bolts will support the tire mount and spread the strain over a much larger area. With the oak board taking most of the stress, the tailgate is safe from damage as long as it is bolted shut.

Two serious considerations before you decide to install this tailgate spare tire mount:

The following is a transcription from the Parts List: Jeep Model CJ-3B, 1956, page 94: "Group 31 - 13, SPARE TIRE CARRIER." Note: I have omitted part numbers for each separate part. See the full parts list page (140K JPEG) for individual part numbers. Comments in parenthesis are mine. 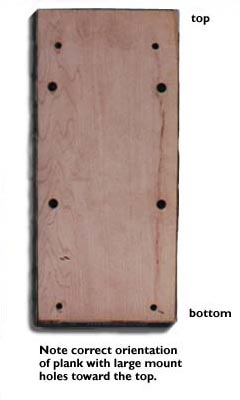 The dimensions of the oak reinforcing board (grain long) in the kit:

Note: A one-inch thick by 7 inches wide and 2 feet long oak board can be purchased from Home Depot for about $7.

Location of holes (measuring from the top and side):

Note: Prior to drilling it is important to double-check the position of the large holes using the spare tire mount as a template.

As seen in the complete kit photo, Willys sometimes used a dark sealer/preservative on the board. If a clear finish is to be used, spar varnish as used on wooden boats would probably be a good solution.

The dimensions of the 4 spacers:

It is important that the spacers be used between the tailgate and the spare tire bracket; otherwise the bracket will crush the three dimensional stampings on the tailgate. The spacers in the kit are made of metal painted black. Gary Keating suggests that the spacers are identical to those used on military jeep gas can mounts and should be available through military jeep parts suppliers.

Bob Westerman has measured the spacers so that if we can't find them we can make them, or fabricate something close from large bolt washers, using epoxy or solder to hold them together. Other than that, all the metal parts are specified in the instruction and parts list sheet and should be available at your local well-stocked hardware or automotive store.

The following is the text from the Installation Instructions (60K JPEG) dated 1953, from Bob Westerman's kit.

Remove the spare wheel support bracket assembly from the vehicle and reinstall it on the tail gate panel. Attach the bracket to the panel and reinforcement, using the four spacers furnished in the kit to the outside of the panel, four 3/8-16x2-1/8", four 3/8" lock washers and four 3/8-16 hex nuts. 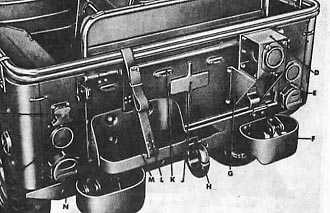 The mount seen in this illustration from an M38 manual, is a standard bolt-on for the M38 tailgate. It fits any civilian Jeep perfectly. Unlike the civilian Willys tailgate mount it is mounted high on the right side of the tailgate. It requires reinforcing with either an oak board as discussed above or two L channel supports welded or bolted vertically to the inside of the tailgate. If this system is used the tailgate must be permanently bolted shut as it was on M38 Jeeps. These M38 tailgate spare tire mounts are sometimes seen for sale on eBay. Reproductions are available from D&L Bensinger as well as other suppliers. 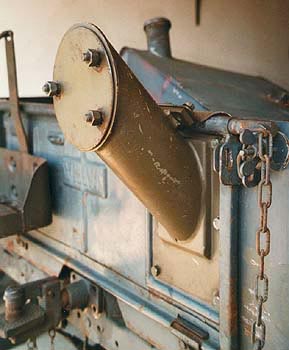 Thanks to Gary Keating and Bob Westerman for providing photographs and documentation of their Willys tailgate mount kits. Joe Zak has provided the photo of his later-style CJ-5 side mount. Bill Oakes provided a brief history of the later-style mount. Thanks also to Eric Cerottini for the photos of his rear-mounted spare tire system. -- Bart McNeil

And thanks to Bart for this close look at another detail of his favorite end of a Jeep. -- Derek Redmond